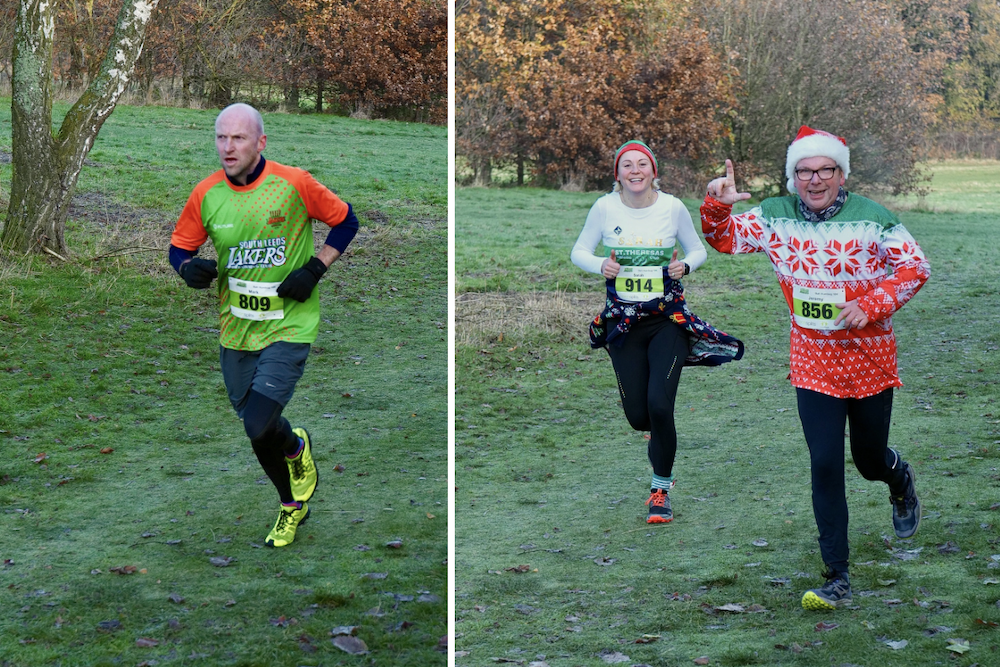 The race made its debut in 2018 when three local clubs – South Leeds Lakers, Morley Running Club and South Leeds Sisters – teamed up with the Hunslet Rugby Foundation to bring a Christmas themed race to South Leeds after the demise of the popular Christmas Challenge.

With the South Leeds Sisters now defunct and Morley Running Club concentrating on their own Morley 10k the South Leeds Lakers took on the running of the race for themselves.

Covid had caused a two year break and with the cost of living crisis hitting running events across the board it would be a challenge to attract punters to the festive event.

The race is unique in that it starts and finishes on the running track at South Leeds Stadium, but then includes a one loop course on mud and hills around Middleton Woods. Featuring such challenges as Scrooge Hill, Tiny Tim and the long trek up the famous Tramway, it makes for a challenging but enjoyable course.

Back at the Stadium 206 competitors set off on the main race; followed shortly afterwards by a Children’s Fun run – two laps of the track.

A one lap race of course has its challenges to marshal, but over 60 intrepid marshals guided runners around the route with the help of tape and flags, but also enhanced the festive mood with bells, music and Christmas costume.

The winner in the end was Richard Herrington of St Theresa’s AC who pipped Leeds City’s Louis Neale in the final straight, Michael Vargas of Hyde Park Harriers picked up 3rd whilst his club showed up in numbers having Bah Humbug as their monthly race.

Hyde Park also had the first woman in Amy Ramsden-Young whilst both Mark Hodgkinson (in 5th) and Emma Chadwick showed well for the host club South Leeds Lakers.

Hopefully now the Bah Humbug is back in people’s diaries the race will be able to attract more runners next year.
The event of course would not be the Bah Humbug without the famous raffle taking place afterwards in Hunslet RLFC’s Phoenix Bar. Plenty of winners shared the prizes with Bramley Breezers again making a good show.

South Leeds Lakers are a free running club for 15+ and meet on a Tuesday, 6.50pm at Hunslet Nelson Cricket Club. The Junior Section (8-14) meet on a Friday at the South Leeds Stadium, see Facebook or Runtogether for full details.