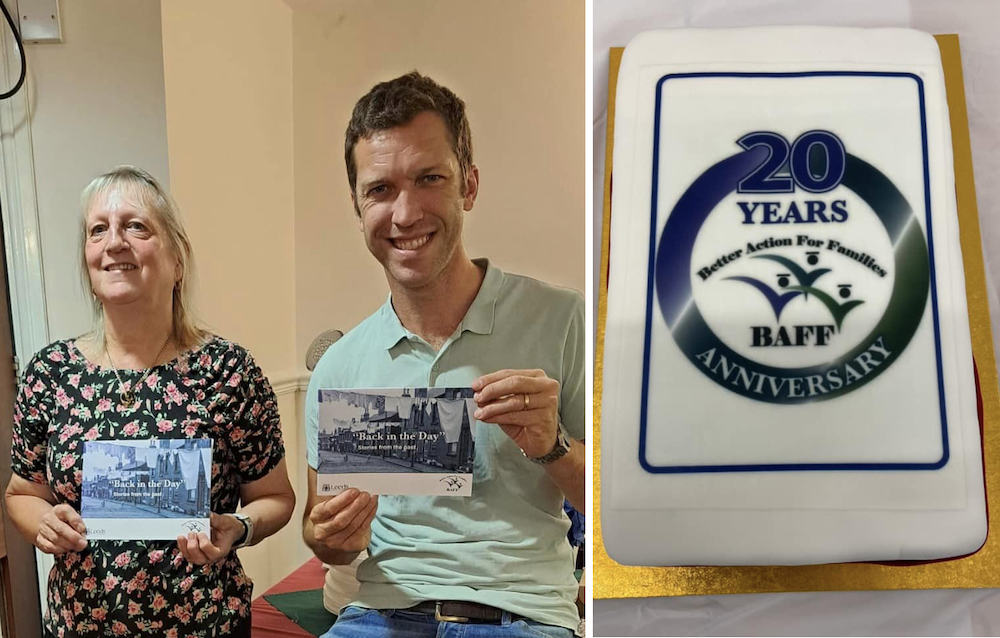 I met with Lynn Bailey to find out more about Better Action For Families (BAFF) which has recently marked its 20th anniversary.

I started by asking how BAFF got started.

“It started with my daughter Leanne,” Lynn explained. “She’s got learning disabilities and when she got to about 17 or 18 years old she realised that her cousins were doing things that she couldn’t do.”

Lynn told me Leanne got really down and depressed and she said to her mother:

“If I’ve got to have a learning disability, I’d rather be dead.”

With help from Health For All, Lynn applied for a small grant and started a weekly social group for people with learning disabilities and their carers.

The group started at the St John’s Ambulance hut on Barkly Road before moving to the old Beeston Library, next to Hugh Gaitskell Primary School. After the library moved BAFF, along with Beeston Forum and others fought to get the building transferred to Health For All to become Beeston Village Community Centre – which has now been rebuilt on the site.

BAFF facilitates the Cares’ Reference Group which gives a voice to people looking after people with learning disabilities and feeds back to the service providers. Amongst other things they review forms the Council send out to carers.

“These always start by asking when did you become a carer?” explains Lynn “But some of us didn’t become a carer, we became a parent.”

They’ve also worked with St James’ Hospital to create an easy-read leaflet which is now carried in every ambulance. BAFF also helped produce a leaflet for people with learning disabilities about contraception.

The Good Lives Leaders project, still on pause due to the pandemic, was set up in the wake of the Winterbourne View scandal. It involved visiting people at home and checking that they were living a good life and getting all the services they needed; that their homes had the proper adaptions and giving information about local activities and services.

“It really made a difference to people and was recognised with a Kite Mark” said Lynn.

As part of their Asset Based Community Development (ABCD) work they have developed the monthly homemade food and crafts market, the knitting and crochet group that made the post box toppers, and the recent ‘Back In The Day’ booklet with residents of Cardinal Court.

On top of all of that BAFF still run seven groups a week:

All the work that BAFF and others have put in over the last 20 years mean that Leanne’s life has changed for the better.

“Now my daughter lives in her own flat and she’s married and she’s got a job, at Middleton Park café” says Lynn. “So from our Leanne, all those years ago not wanting to exist anymore, she’s actually flourished into this lovely young woman who’s quite independent. She has support, but she’s separated from me, I’m no longer her carer, I’m back to being her mother.”

And what next for BAFF? Well their next project is making a film with Lippy People about every carer’s greatest fear – what happens when they die, who will look after their child?

Explaining bereavement and helping people with learning disabilities grieve is an often overlooked area. Lynn was spurred to start this project after she spoke to a young man who had been told “He had to be brave” after his Dad died. She gave a hug and let him cry.

That care and respect sums up Better Action For Families.

Photos: Lynn Bailey with Cllr Scopes at the launch of ‘Back In The Day’ and BAFF’s celebration cake