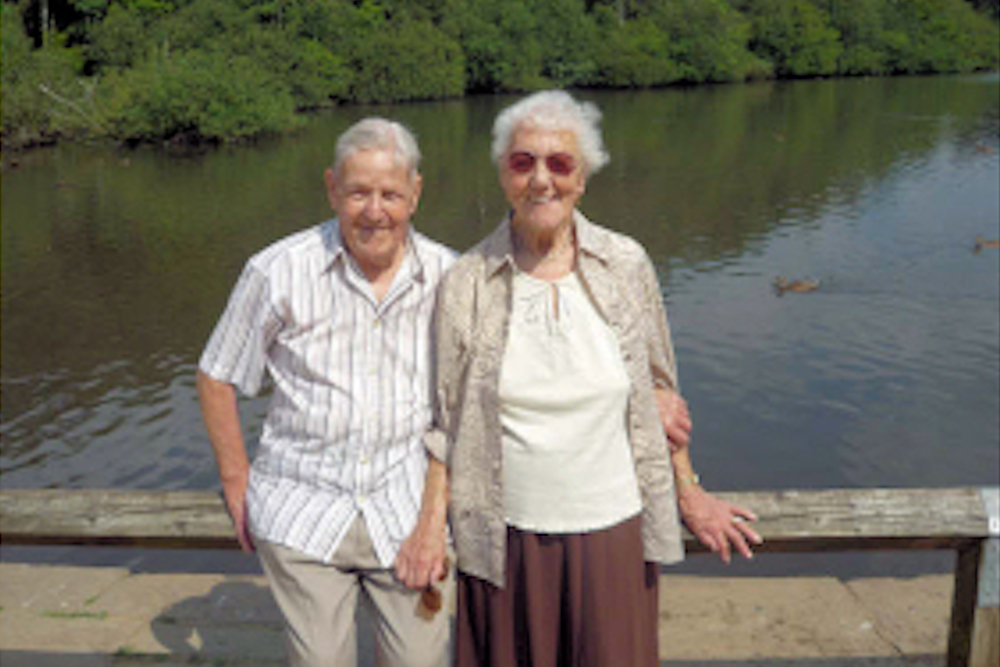 Last week Arthur (Art) Earnshaw, an old ‘Beestonian’, celebrated his 100th birthday. A lifelong supporter of Leeds United, he was proud and delighted to receive a birthday ‘card’ from the club, signed by Marcelo Bielsa and with team autographs too. It was especially significant since the club was formed only two years before he was born.

His daughter Janis chatted to him about his life and the chat is summarised below.

Art was born in Meanwood on 7 January 1921 along with his twin sister Minnie. They were the youngest of seven children of parents William (from Hull) and Ann (nee Potts from Holbeck). Art went to Bentley Lane School in Meanwood and left at 14 years old. Even then he was a lover of sport and played rugby and cricket and this continued throughout his life.

In the 1930s the family moved from Meanwood to Cross Flatts Avenue in Beeston. In 1939 Art met Joan Nash on a bus trip to Blackpool; Joan lived in Camberley Street, off Dewsbury Road. Two years later they were married and lived in a back-to-back house in Leyburn Terrace, Beeston Hill.

Art had several jobs throughout his 50 year working life, but hardly ever had a day off. On leaving school he swept floors for a tailor on the Headrow (A. J. Spencer). He then joined Kershaws in Harehills (where he worked for 20 years) as an apprentice engineer training to be a capstan setter. On completion of the apprenticeship he was paid the princely sum of £2 per week. He later worked at Yorkshire Copper Works in Stourton and Barnbow in Crossgates. Finally, he was a foreman at Waddington and Walker, an engineering company, but when he was 64 the firm went bankrupt so Art decided to call it a day and retired.

During World War II Art was not initially conscripted because he was working as an engineer and was needed for the war effort at home. However, eventually he was called up and applied to be a rear-gunner in the air-force. Fortunately, for him, he failed his medical due to hearing problems – the posting had one of the highest fatality rates of the war! Instead, he ended up in the Home Guard patrolling the centre of Leeds during the blackouts.

After their marriage, Art and Joan soon managed to scrape together enough money to pay for the deposit on a three bedroom semi-detached house on Robb Street in Beeston, the ”posh” side of Cross Flatts Park as he recalled, where he lived for the rest of his life until the 2000s. They had two daughters, Susan, the eldest, and Janis, who I know from our schooldays together at Cockburn High School in the early 1960s.

Tragically, Joan died suddenly in 1976 aged 55 years. Some time later, in 1978, Art remarried his friend Dorothy Johnston, who had lost her husband, Leonard, a couple of years before Joan died. The four of them had been the best of friends in the past. The marriage lasted for another 34 years when Dorothy died at the age of 95.

2 Replies to “Art scores a century”