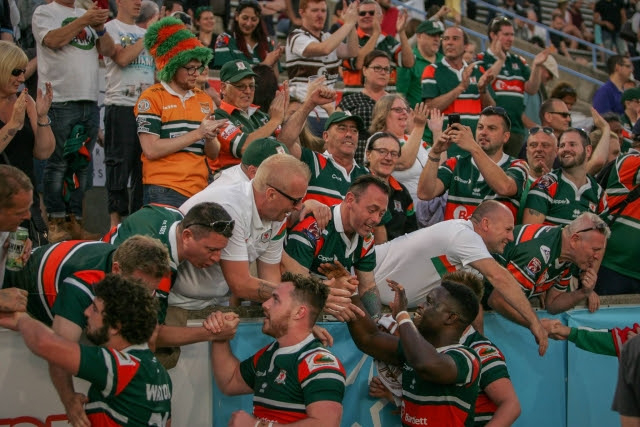 They all came over in a great winged bird this time…sweeping aside everything in their path…they came to play and sing..they were determined in their thoughts as they anticipated the great challenge ahead.

On the day of the match their voices could be heard all over Liberty Village as they settled into the Brazenhead and started to sing…their numerous flags billowing in the wind and it was how they sang…loud and steady….from the heart.

And so it went on and on…singing on the walk to the game…singing at the stadium…singing throughout the entire first half …never stopping, never wavering, not for a moment…the crowd of 6000 Newbies stared and listened in disbelief…”So this is how its done!” they said to one another…”This is how things operate in the old mother country!”

And their boys heard on the pitch and rose like tigers and tackled like real British Lions (not like those Union ones currently on tour) but better, stronger and faster.

And what of the feared Wolfpack…they heard the songs too and were startled and somewhat disoriented…they could not properly communicate with each other due to the noise! For a while the howls could not be heard!

The secret weapon had to be unveiled quickly at halftime and it was the only thing that stopped the endless chanting…the Hunslet fans stared in silence as one…mouths agape like a hungry young lad before his first breast feeding…A GIANT HOTDOG GUN THAT BEGAN RAPID FIRE INTO THE CROWD!

And so it went on, into the entire second half…the Hunslet players running to their loyal fans after the game like a lost moose calf to its Mom…LET THE DRINKING REALLY BEGIN NOW!

And some are still singing now….they will never stop!

And through it all, if one looked into the sky, peeking through the crowds, were the founding fathers of your club, and all of Rugby League, with huge smiles on their faces, and pints of good pale ale in their hands …and the RUGBY GODS showered the concrete box known as Lamport Stadium with music and joy on that day!

Join these legendary supporters at Hunslet RLFC’s next home game on Sunday (2 July 2017) against Coventry Bears. Kick off 3pm at South Leeds Stadium.