On Friday evening (1 July 2016) about a dozen local residents were joined by Air Cadets to remember soldiers from Beeston and Holbeck who died in the Battle of the Somme. 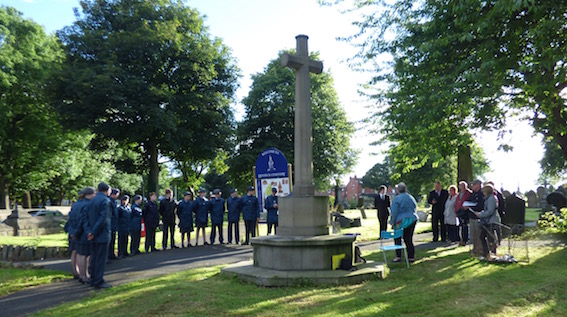 The commemoration, on the centenary of the start of the battle, was organised by the Friends of Holbeck Cemetery. Ken Tidswell read out some facts about the battle, which raged from July to November 1916. It was one of the bloodiest ever fought and the British lost 72,000 men on the first day alone, many of them from the Leeds Pals battalion. The greatest gain of territory during the five months was just 5 miles.

Eve Tidswell and others shared their research on the fourteen men who died on the battlefield or from their wounds and are buried in the cemetery or remembered on family memorials. 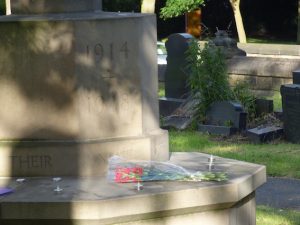 Thomas Pilkington of Cambrian Road, Holbeck was injured on 1 July 1916, evacuated to the 2nd Northern General Hospital in Leeds, where he died of his wounds in September 1916.

Frederick Lewis of Stratford Street, Beeston was the first of the Leeds Pals to be buried in Leeds. He too was wounded and died on board ship being evacuated the Britain.

Hearing the stories helped to bring a piece of history to life. These were ordinary people who lived on the streets we live on, did the jobs we do (mostly).

A minute’s silence was held and Cllr Adam Ogilvie read from the poem For The Fallen:

They shall grow not old, as we that are left grow old:
Age shall not weary them, nor the years condemn.
At the going down of the sun and in the morning
We will remember them.

The vigil ended with a member of 168 City of Leeds Squadron Air Training Corps scattering poppy petals on the Cross of Sacrifice.