The encampment of Irish Travellers on Holbeck Moor last month once again generated considerable debate about the presence of Travellers and Gypsies in the lives of the south Leeds communities. We here explore the history, background, current set-up, and potential ways forward on this controversial subject.

The communities now understood as Gypsy and Traveller emerged as distinctive groups about 1000 years ago. (Gypsies are of Romany heritage, originally from northern India. Travellers are most often seen as of Irish heritage, although they see themselves as distinct, and refer to themselves as ‘Pavee’.) 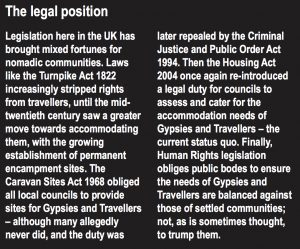 Gypsies and Travellers first starting arriving in the UK in the 1400s-1500s, and through the centuries typically took casual work including that of labourers, tradespeople – and most famously, as entertainers and circus hosts. They pitched camps at their places of work, sometimes on roadsides, or at long-established stopping places on the edges of towns and cities.

But their presence amongst established communities has often been contentious. From the earliest days, allegations have persisted that the travelling communities often demonstrate criminal or anti-social behaviour, are uncooperative, are dirty, and more. So as early as the 1500s, UK laws saw Gypsies and Travellers deported or even executed – a pattern repeated throughout Europe over the centuries. Most brutally, an estimated 250,000-500,000 died during the Nazi holocaust.

Nowadays, an estimated 300,000 Gypsies and Travellers live in the UK. Of these, 50% are settled in permanent housing, 30% live in authorised encampments (either privately-owned or run by councils, where residents do typically pay council tax and utility payments), and 20% live on unauthorised roadside encampments. As seen in Holbeck last month, it’s this final 20% who are largely ‘the problem’ – uninvited in communities, seen to create environmental impact (litter etc) and other problems including anti-social behaviour, and subject to costly court battles as local authorities seek to evict them.

Recent unauthorised camps in south Leeds have indeed seen local environmental damage, relatively high levels of litter, allegations of anti-social behaviour (including harassment, dangerous dogs, noise nuisance, etc), and more. For balance, it’s worth adding that – whilst almost no-one supports the littering – some residents insist that they have positive interactions with the Travellers. Meanwhile, the authorities are often seen as largely inactive – or even accommodating. With the recent Holbeck encampment, it seems that the Police effectively supervised the arrival of the Travellers on the site. 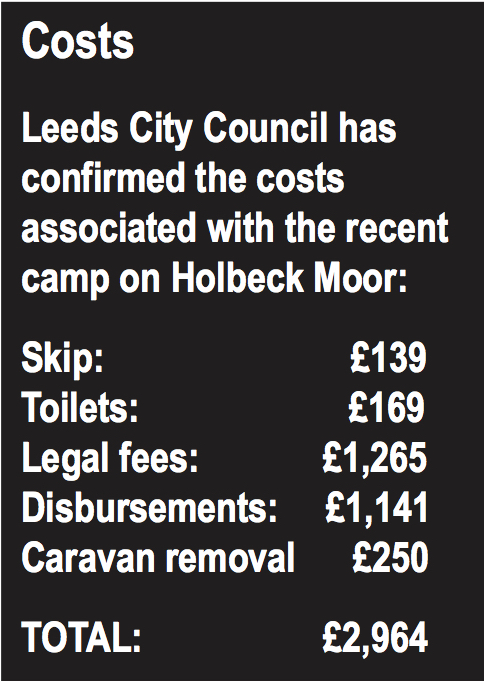 Unlike at authorised sites, there’s no mechanism for those at unauthorised camps to make financial contributions – so an added bone of contention amongst local communities surrounds the cost of these camps. The recent Holbeck encampment – consisting of about 70 people in about 20 caravans – cost Leeds City Council £2,964.16; and over the past decade, Leeds City Council have spent an eye-watering £3m dealing with unauthorised encampments.

Acclaimed local charity Leeds GATE, who advocate on behalf of the Gypsy and Traveller communities, stated baldly in a 2010 report to the Council’s Environment and Neighbourhoods Scrutiny Panel: “There is no disagreement that a reduction in unauthorised encampments… will lead to reductions in cost, environmental impact, unaddressed antisocial behaviour, and community tension.” It seems everyone has much to gain from finding better solutions – but the obstacles are many.

First, Gypsies, Travellers and their advocates point to the ongoing lack of authorised places. The Council have publicly recognised a need for 62 permanent new pitches – but are struggling. Leeds’ primary authorised site is Cottingley Springs, established in 1969, which has 41 pitches and a long waiting list. The Council recently applied to expand the site, but were rejected in the courts last year – largely because government guidelines encourage more smaller sites, rather than large ‘ghettos’ (a view echoed by Gypsy and Traveller groups), and also following local opposition to further building on greenbelt land there.

Indeed, planning applications for new sites – on Council or private land – are regularly challenged by local residents and businesses. Locally, there was the lengthy campaign fought (and won) by Hunslet Carr Residents Association against a site on Sandon Mount. Also in Hunslet, the Council – through their city-wide Site Allocation Plan – recently identified a potential Travellers site next to the Tulip Retail Park; this also generated opposition. Nationwide, 80% of all planning applications are granted – but 90% of applications made by or for Gypsies and Travellers are refused.

A rare success story has been the small (8-pitch) site at Kidacre Street, behind Crown Point Retail Park. Originally established in 2014 as a temporary site, it was recently granted a 10 year licence. (But its long-term fate is unclear, as it’s on the likely route of the HS2 rail line.)

But these sites are only half the story. They would meet the needs of Travellers based locally – but what of non-local groups passing through the city, whose unauthorised encampments (such as that in Holbeck last month) arguably create most problems? Undoubtedly, part of the solution is prevention and policing. Indeed, the Beeston and Holbeck councillors are seeking to get railings installed on Holbeck Moor, urgently (at a cost of £21,000). And the Council are right now writing a clear protocol for themselves and the Police on how to handle unauthorised groups arriving in the city. (There are currently no agreements as to what actions can or should be taken.)

But advocates argue that this alone will simply push the problem around. So, as well as more permanent sites, groups including GATE are arguing for a ‘negotiated stopping’ approach – whereby Gypsies and Travellers are given permission to create temporary encampments on ‘non-sensitive’ sites (for example, not Holbeck Moor!), within mutually-agreed codes of conduct, timescales, and so on. It apparently works well in Bristol and elsewhere.

There is much to iron out. How much say would local residents get? Might mechanisms be established to enable members of these temporary camps to make financial contributions? And more. But surely there’s everything to gain from this approach, alongside the establishment of new permanent sites – to prevent the disruption and costs associated with recently unauthorised camps. What’s stopping us..?