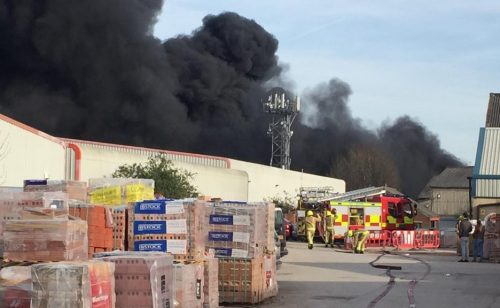 South Leeds was yesterday afternoon (Monday 3 April 2017) the scene of a major open-air fire, causing disruption for thousands of people – and a plume of toxic smoke visible from as far as away as Wakefield and Bradford.

A large pile of 80 agricultural tyres caught ablaze in the open, immediately next to the M621 – on the Climax Works industrial estate, just off Garnet Road in Beeston. The tyres were on the land of the estate property managers, Mcdonald King; but they belonged to a waste management company – who lease one of the neighbouring units – called IWM Tyre Recycling (previously known as Tyres 2 Bales).

The fire was first reported by the AA at around 4pm, with West Yorkshire Fire Service called just before 5pm. Three fire crews from Hunslet and Leeds attended, successfully containing then extinguishing the fire by about 6.30pm. There were no injuries, nor damage to buildings – but the fire wreaked havoc with the rushhour traffic, with the M621 shrouded in thick smoke, and the westbound lanes closed for about 30 minutes.

Local resident Toby Lloyd, who lives across the road on the Garnets, commented:

“At last autumn’s anti-fracking event in Hunslet, one of the speakers suggested that south Leeds was being treated as a ‘sacrifice zone’, where bad things were essentially allowed to happen for the benefit of the wider society; this feels like another example of that. The media coverage was all about the traffic disruption – but more than that, the people of south Leeds are suffering once again, this time with a bout of toxic air pollution. We need to make sure that we speak up, that people and companies are held to account – and in the long term, try and ensure that this kind of thing doesn’t keep happening here.”

South Leeds Life also spoke on site with one of the Mcdonald King team. He confirmed that the tyres had been on their land – but belonged to IWM. He added that the tyres shouldn’t even have been there, but that IWM had asked Mcdonald King to allow them to store the tyres there in the open for a short period of time. (The tyres had though been there “a good month”.) He said they had “no clues” as how the fire had started.

And he added that this irregular arrangement meant that IWM had been in contravention of the strict regulations surrounding the storage and disposal of tyres. Waste vehicle tyres are highly polluting when burnt or otherwise disposed of, and are therefore notoriously costly and difficult to process. A large industry has grown up to manage them – which is in principle firmly regulated and above-board, but also sometimes subject to illicit and rogue activity.

South Leeds Life tried to contact IWM for comment, but haven’t yet heard back from them; we understand from Mcdonald King that the owners are currently overseas. We also spoke with West Yorkshire Fire Service; they confirmed that the Environment Agency had been made aware of the fire, and would follow it up – in conjunction with West Yorkshire Police if necessary. We are awaiting a formal response from the EA. Watch this space for further updates.