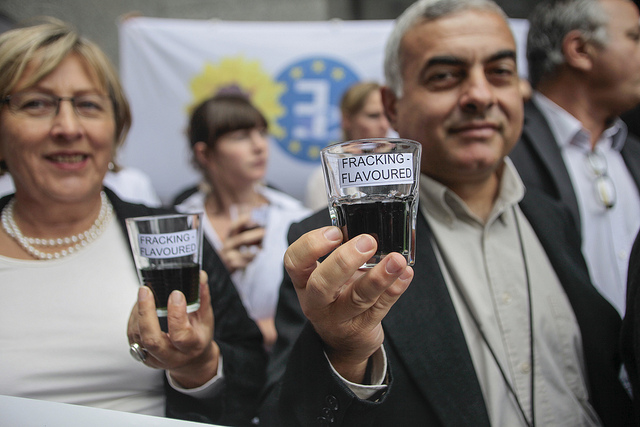 This article is part of the fracking series put together by Frack Free LS26.

Hutton Energy has recently bought the license to complete exploratory fracking drills across south Leeds, including in Middleton and Belle Isle, and much of the surrounding area. This series of articles hopes to educate people about the risks of fracking, and to encourage people to support the local community campaigns against the industry.

The fracking process involves pumping water, chemicals and sand into deep wells. This article focuses on what effect this can have on the water systems around us, principally focussing on the effects on the water table and our drinking water.

The water table is the point at which the ground is saturated. During periods of heavy rain the water level rises and during droughts it lowers. Fracking drills are around a kilometre deep, so the pumping of water here will cause the water table to rise. This has multiple knock on effects:

Flooding. If the water table rises that means low lying areas can flood. Yorkshire and Lancashire are both areas that recently flooded, and are also areas where fracking licences have been issued. “Almost 20% of fracking licence blocks offered by the government substantially overlaps with zones at significant risk of flooding according to a new analysis by Energydesk.” Fracking in these areas will simply increase the risks of future flooding.

Radioactivity. Naturally occurring radioactive material (NORM) is situated underground, and when it’s underground the radioactivity cannot affect us, however when the fracking water returns to the surface the water is often found to be radioactive. According to the Department of Energy and Climate Change, the resulting water treatment “would be expected to remove up to 90% of NORM; only very low levels would still remain. After treatment, the water may still retain some of this natural radioactivity and disposal to rivers, estuaries, sea or groundwater may lead to intakes of radioactivity through consumption of drinking water and contaminated foodstuffs.” Even the government acknowledges that fracking will result in us drinking water that has levels of radioactivity!

Nearby, Knostrop Sewage Treatment Works (LS9 0PJ) is “mentioned in correspondence between Lancashire County Council and Arup in connection with radioactive waste water disposal” You can download the letter detailing Knostrop’s use in treating radioactive wastewater on the website.

Animals. As we know 5% of wells leak, so waste water flows into the surrounding ground and makes its way into the natural streams and rivers around us. All wild animals and a large number of livestock animals rely on ground water for drinking. The last article detailed the catastrophic effect fracking waste water had on livestock, but it won’t just affect animals, in humans the health implications associated with these chemicals range from rashes, and irritated lungs to cancer and liver damage.

This article briefly details the affect fracking can have on the water systems around us. There are the effects on the natural landscape, with an increased risk of flooding, the radioactivity of the wastewater and the fact the wells leak meaning the radioactivity and chemicals can spill into our drinking sources.

If you are interested in participating in the Anti-fracking campaigns please join one of the following:

Frack Free Leeds (also the point of call if you want to set up a local group): frackfreeleeds@gmail.com; www.facebook.com/FrackFreeLeeds/

If you’re an engineer (all disciplines welcome) please join a new venture to get a national, professional campaign against fracking. Engineers against Fracking: www.facebook.com/Engineers-against-fracking-930181560397829/

This post was written by Becky Ford using our Create an article for South Leeds Life page.

3 Replies to “The dangers of Fracking: Water”