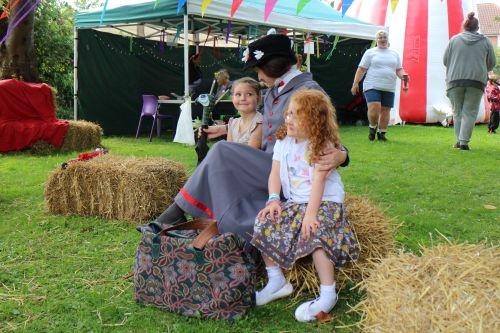 After a few spots of rain in the morning, it turned into a sunny day for the annual Summer Grooves Fest at the Belle Isle Family Centre.

I first introduced myself to Leanne of the Centre and later met up with Vikrant just to make sure it was OK to take photos, there was only one child who didn’t want pictures taken.

I met up with a lady from Swithens Farm, Rothwell and her miniature 6 year old horse called Star. Note to myself, must pay a visit to the farm, when I can.

Not far on from that, the Fest seemed to gather pace and now up to 150 children and parents where enjoying the sunshine.

One young lady, dressed up as Mary Poppins, was very popular with the children and they could not wait to have photos taken with her. I also spotted a Ninja Turtle.

A bit later I met up with Kim Groves and Paul Truswell (local councillors) I managed to have a few words and that I was moving to Middleton.

They said I would love it at Acre Court, I hope so. Kim pointed out that the new Middleton Centre is just across the road from the centre, very handy for bacon sandwiches I’m told.

Moving on to to have a sit down on bales of straw (very handy) and listen to the band Funk Soul Trio, the live festival band.

Just after a little while, thought I would bob in side the centre to see any more attractions.

A photo studio was set up to take children’s photos, quickly on to the kitchen for a slice of Pizza, why not.

Back outside, children were lining up for face painting. Children on another part of the fest were told to grab a glo stick and visit Jumping Julie’s festival night club.

A couple of inflatables, again very popular with the small children. One of the inflatables seemed to have a disco inside.

On one of the many stands a cycle connected up to a blender, creating electric power to make a fruit drink for anybody having a go.

Glad to say no patients at the First Aid Tent. It brought back memories of when I took my first aid course. Within the year after taking the course I saved three people’s lives. If you can take advantage of a St John’s first aid course, please do.

Anyway after a lovely two hours at the Fest and in the sunshine made my way home to edit for my blog and edit the many photos taken.

I’m sure everyone had a lovely time, and all the better for a lovely sunny day.

You can see many more pictures of The Fest on my web site, click link and Belle Isle Groove Fest.

That’s all for now, I may see you at the Middleton Park produce show later in September.