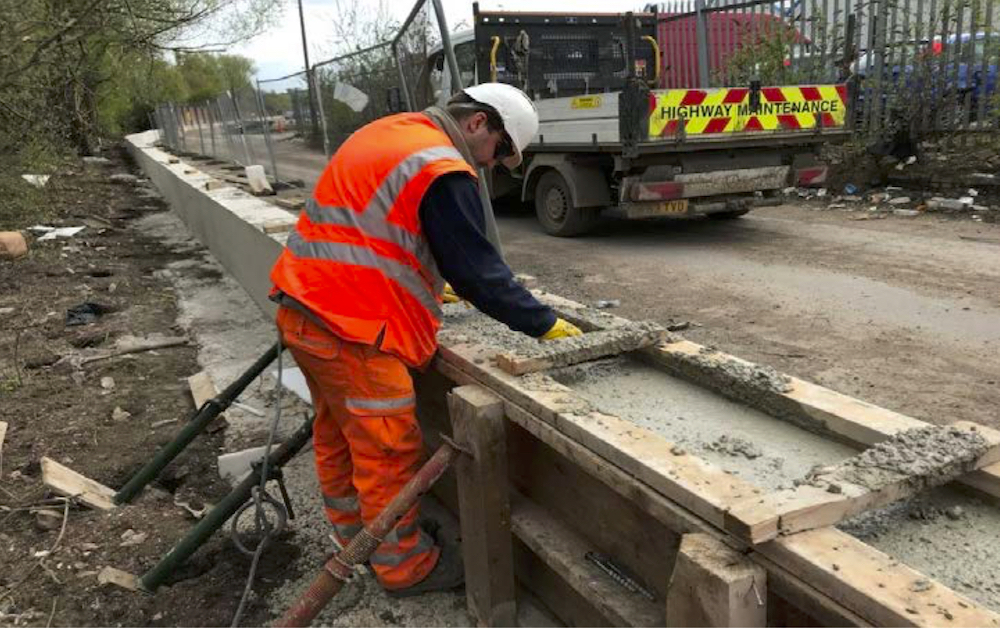 Businesses in the Stourton area of Leeds are benefitting from increased flood protection following the completion of a new 730-metre flood defence wall and property level protection, such as flood gates and demountable barriers.

The project, led by Leeds City Council in partnership with the Environment Agency, has reduced the risk of flooding to 88 businesses in Stourton and is one of the first areas of work for the second phase of the Leeds Flood Alleviation Scheme.

The £1.4m project, funded by Leeds City Council and the European Regional Development Fund, is part of a package of measures of advanced works designed to mobilise defence construction quickly and efficiently to best protect the city, before the main works of the scheme are approved.

As well as the new flood defence wall along the boundary of the Haigh Park Road Industrial estate with the Aire and Calder Canal, property level protection has been installed at four businesses and one Northern Power Grid site. This has involved supplying 17 aluminium demountable barriers that can be installed by the businesses across door openings in the event of a flood, where surface water flooding could occur due to the water being prevented from discharging into the canal or river as normal.

The works will provide a 1 in 200 year standard of protection to 88 existing businesses in the Stourton Industrial Estate, safeguard over 4,000 existing jobs in the area and help to protect access to the M1.

“It is very pleasing to see these works at Stourton as part of the initial element of phase two of the Leeds Flood Alleviation Scheme completed.

“Similar measures introduced at Woodlesford for phase one proved effective during the Christmas floods of 2015, so these defences will help protect local businesses, safeguard jobs, and vitally offer reassurance and confidence that these improvements do work at a local level.

“These measures provide further protection for our city centre and for the South Bank area, with formal engineering elements supported by the impressive flexible barriers which can be deployed quickly whenever there is a flood threat. We are firmly committed to seeing all our communities and businesses along the River Aire catchment protected through measures like this, and will continue to make the case for the phase two plans.”

On 26 December 2015, Leeds experienced significant and widespread flooding with some of the highest river levels ever recorded following Storm Eva. The flooding affected nearly 3,000 residential properties and nearly 700 commercial properties. 40 businesses in Stourton, between Thwaite Mills and the M1, were significantly affected by the floods.

“The completion of these works is great news for the businesses that flooded in Stourton and for the people and communities who depend on them for the services and jobs they provide.

“Following the successful completion of Phase 1 of the Leeds Flood Alleviation scheme in October 2017, the Environment Agency is continuing to work closely with Leeds City Council to develop and deliver Phase 2 of the scheme, which will help to ensure that Leeds continues to be a great place to live, work and do business.”

Towngate Plc is an industrial property agent that manages around a dozen commercial properties in the Stourton Industrial Estate. All of its tenants were impacted in the December floods.

“We were delighted when we were informed of the flood defence plans in Stourton. We understand that projects like this take a while to get off the ground and we were surprised at how quickly it took Leeds City Council and the Environment Agency to make the announcement.

“Since we have been able to tell our tenants about the plans, confidence in the area has boosted as many of our tenants’ concerns will now be addressed. We hope this increased confidence will also continue to benefit businesses looking to move here, bringing with them more employment opportunities to the area.”

The Leeds Flood Alleviation Scheme is led by Leeds City Council in partnership with the Environment Agency and is split into two phases.

A big contribution to the flooding at Stourton was the breach of the river and canal at Knostrop. Stourton is located downstream of Phase 1 of the new Leeds Flood Alleviation Scheme and at the time of Storm Eva, Phase 1 of the project was under construction, so it didn’t provide any flood risk benefit to Stourton.

In October last year, the £50 million Phase 1 of the Leeds Flood Alleviation scheme was officially opened which now provides a 1 in 100 year standard of protection. During construction, there was a repair to Knostrop by-wash with strengthening works including sheet piles. Work also involved the construction of moveable weirs at Crown Point and Knostrop and the removal of a manmade island which separated the canal and river, known locally as Knostrop Cut. The weirs can be lowered when high river flows are expected, to help lower the river level. This work will help protect from another breach happening as it did on Boxing Day, and provide additional protection to Stourton.

The completion of work at Stourton comes as an outline business case for phase 2 of the scheme has been submitted to government, which outlines plans to reduce flood risk to the city upstream of the city centre, taking a catchment wide approach.Phase two identifies measures further upstream including the Kirkstall corridor which was badly hit by the 2015 Christmas floods. It also looks at areas beyond the city boundary to further reduce the possibility of the river flooding in Leeds, as well as additional measures to offer protection for the South Bank area of the city centre which is a key future economic driver for Leeds.

The phase two plans also have a strong focus on Natural Flood Management (NFM), with proposals to create new woodland areas which would more than double canopy coverage in the River Aire catchment. It also proposes water storage areas to be created and developed, operated by control gates system meaning water can be held and then released back into the river when safe to do so. A third element would be the removal of existing obstructions along the river to help reduce water levels, along with lowering the riverbed in places to improve its capacity and flow.

Aside from these measures, phase two would also see some new infrastructure measures installed including landscaping, terracing, embankments and walls, but due to the range of natural measures the height of any engineered defences would not need to be as high as originally projected, typically averaging 1.2 to 1.5 metres in height.

If approved by the government, proposals for the main works of Phase 2, created by Leeds City Council working with the Environment Agency and BMM jV Limited, would see work scheduled to begin in summer 2019.