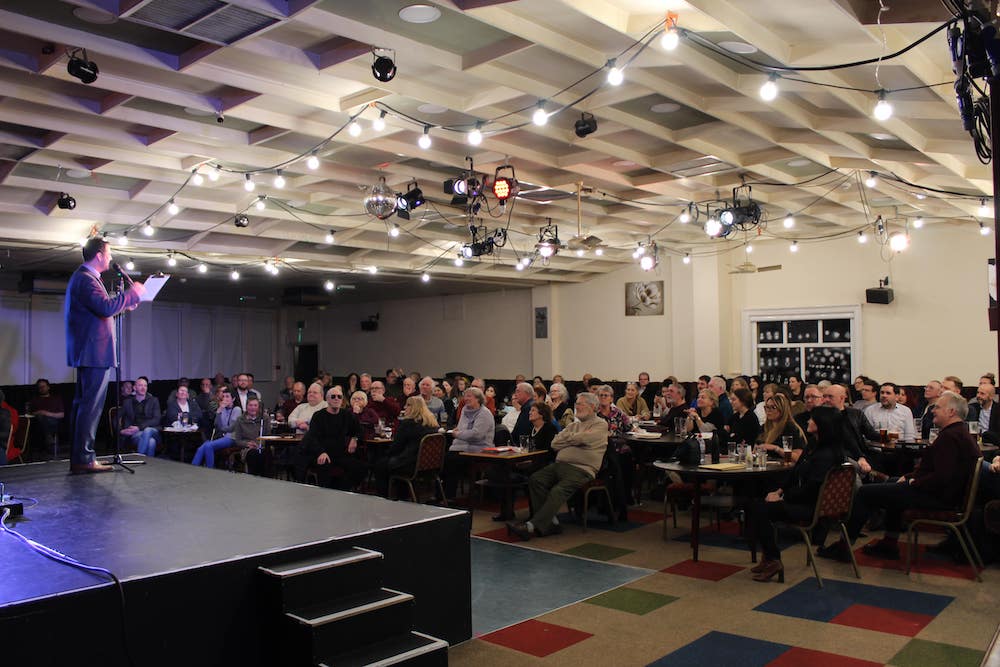 Holbeck and its citizens in all their glory – sometimes gritty, sometimes funny, always real – was celebrated at event to mark the culmination* of the Once Upon A Time in Holbeck project last night (15 January 2020).

Slung Low, Holbeck’s own theatre company, hosted the evening at The Holbeck where the concert room was packed with an audience eager to hear stories and cheer winners. The project was sponsored by CEG, the developers behind the nearby Temple district around Water Lane.

Alan Lane, Slung Low’s Artistic Director, was Master of Ceremonies for the evening and kicked off proceedings by explaining how the project had called for residents to tell their stories about the area, which he described as:

“A varied, vivid and magic real place, whose residents are worthy of being listened to. (This competition is) a celebration of the things in your head which are worthy and valuable.”

The stories that came forward demonstrated just that with tales of horses being hosed down in laundrettes, circus performers who slept with lions and crowds sweeping fascists off the moor in 1936.

The winning story was written by David Kelly, who imagined the events of the last century seen through the eyes of one of the founding fathers of Holbeck’s industry. David said:

“It is an honour to have my work recognised by this great initiative. I feel very passionately about Holbeck’s history, having lived here for 28 years, so I wanted to take this opportunity to capture some of the community’s highs and lows.

“The main character in the story, Matthew Murray, was created so his life would reflect major milestones in our community’s history, from the Battle of Holbeck in 1936 to the thrill of watching the football crowds pass through on Leeds United match days. I’m very proud to be part of this great community and this project has been a great way to commemorate its rich history.”

An extra prize had to be added when judges read the twelve stories written by children at Kidz Klub. They were all so good that BAM donated a set of arts resources to the group so that they can carry on creating.

Lisa Riley wrote about the people she’s met in her role as Receptionist at Marshall’s Mill. On her first day she met a man who told her about all the old industries that used to be in Holbeck pointing out: “Without South Leeds there wouldn’t be a North Leeds.”

Paul Brown wrote about his role as a Policeman back in the day and conjured up a vivid picture of the factory nightwatchman with his stove and piping hot mugs of tea.

Ian Pickup told how a band of volunteers took over the Holbeck Working Men’s Club (as it was) when it faced insolvency and closure six years ago and kept it going until they partnered with Slung Low last year.

A tale of the legging of Moseley’s fascists was told to Pete Clark by his Granddad. The only time he ever heard him swear was when he referred to the “blackshirted bastards” at which Pete’s Nan would batter him around the head for using profanities in front of the kids.

A group of women from Ellie’s World community shop in the Recreations submitted a conversation they had. It touched many subjects including the difficulties of raising children on your own, flights from abuse and saving your neighbour’s parking spot. Alan Lane described it as “All the things Holbeck is: Funny, hard, and full of solidarity.”

Holbeck Cemetery contains many fascinating people and their stories including a circus performer called Mary Bailey. Eve Tidswell told the story of how she slept with the lions “to calm them down” and the secret behind training a horse to understand English and answer questions.

Head of sales and marketing at CEG, Aisling Ramshaw, said:

“This initiative started because we realised that while we had a wealth of information on the architectural history of Holbeck, we were missing the human stories.

“Holbeck is so rich in history and a lot of these memories are held with the people who live in the community. When we heard some of the stories, we realised that something needed to be done to help record them, but also to celebrate those memories that have played a huge part in Holbeck’s history. We’re looking forward to adding to our catalogue of stories and would encourage anyone else with a memory, whether that’s a photograph or a story, to come forward and share them with us.”

“This project has been about listening and valuing the stories and experiences of the people who live and work in Holbeck. The quality of the stories that featured last night was testament to what a good idea this is. Holbeck’s history is crammed full of stories of the extraordinary, the bold, the brave, the generous, the kind and the hard working. The event made clear that this wonderful history promises so much for Holbeck’s future. This is a really exciting time to be in this part of the city.”

All winning entries will be uploaded onto the Temple Leeds Facebook page.

*Furthermore, the initiative, Tales of Holbeck, will continue to accept stories and images celebrating the community, these can be sent to holbecktales@slunglow.org