We start this week in Cross Flatts Park on a rainy Saturday morning asking what links Darth Vader, the Flintstones, Clark Kent and a pantomime horse? It’s got to be the Cross Flatts Parkrun 3rd anniversary fancy dress run last Saturday. Paul Whitehurst has posted 348 (count ‘em) photos on the Facebook page. 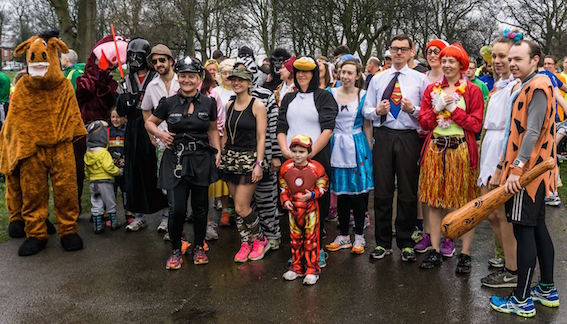 There’s a report about the HALO project’s residential trip and details of forthcoming trips for older people on the Hamara Centre’s website.

John Cummins from Groundwork will be the speaker at Beeston Community Forum on Thursday (7 April) evening.

Do you fancy trying your hand at collage or decorating ceramic tiles? The Tetley art gallery is running a series of workshops through the school holidays.

The Works skate park has extended its opening hours for the school holidays and is also offering a week’s pass for just £30.

Great to hear the story of Neil, a volunteer with learning difficulties at SLATE’s Feel Good Furniture Shop who now has paid employment at the White Rose Shopping Centre.

If you missed Level Up Academy’s grand opening you can catch up with a short video showcasing Parkour, cheerleading and aerial skills and more at their new facility in Beeston.

Hunslet Carr Residents Association raised an impressive £2,000 for community projects at their auction at The Parnaby tavern last Sunday. Well done to all involved.

By the way if you were wondering about the new Hunslet Carr sign outside the Bay Horse, Middleton Railway have revealed that they donated the wheel at its centre. Don’t forget the official unveiling takes place on Thursday (7 April) at 6pm.

Cottingley will be celebrating local D Day veteran Bill Cutler on Saturday (9 April). The 40’s style party will be held at the community centre from 12:30pm.

Interested in yarn bombing? And canals? This could be for you! The Knitting Communities Together project is celebrating the bicentenary of the Leeds-Liverpool canal with weekly knitting sessions, every Wednesday, at Dock 29, Leeds Dock in Hunslet.

Leeds Dock features alongside Temple Works in Holbeck in a Leeds List article about ‘developments intricately entwined with Leeds history’.

And finally, if you want to take up a free tennis lesson for children aged 5-8, you’re advise to hurry and book a place at John Charles Centre for Sport Tennis Centre.