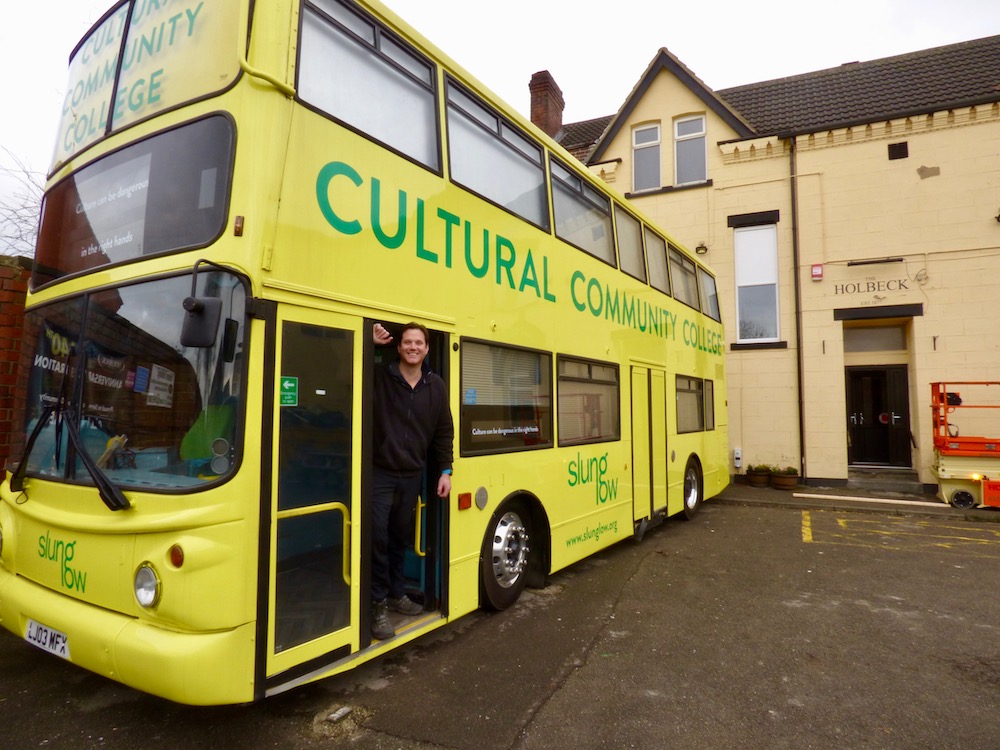 Back in October we reported that Slung Low, Holbeck’s own theatre company, was moving from under the viaduct to The Holbeck club. I caught up with Artistic Director Alan Lane to find out how the move was going.

I arrived to find the power off at the club as workmen removed the last of the asbestos from the building.

“We’ve had to close this week whilst this work is carried out, but the refurbishment is going really well.” Alan tells me. Before I leave the Slung Low illuminated sign will have been installed above the club’s entrance.

Has Slung Low taken over the club, I ask.

“The day to day to running of the club, yes. But the club is still owned by the members and that’s really important – it’s an important asset owned by the community of Holbeck.”

Alan describes the deal between the club and Slung Low as a win-win.

“We spent six weeks negotiating the deal. Not because it was difficult, barely any details changed from the first discussion, but neither side could believe they were getting such a good deal.”

The Holbeck has had its debts to the brewery cleared and the building’s deeds returned to the members. It has also been indemnified against a financial loss for the five years of the agreement.

Slung Low has got a secure base for five years with a larger performance space in a more accessible location.

Slung Low were able pay down the club’s debts because of income from shows like Flood which they staged in Hull as part of the City Of Culture and was shown on BBC television.

What will Slung Low do at The Holbeck?

“We’ll do what we’ve always done. We will have a programme of touring productions coming in on a Sunday at 5pm and we’ll have the How To … festivals and ceilidhs. And everything we do will still be Pay What You Decide – see the show, join the activity and then decide how much to it’s worth and how much you can afford.

“Just before Christmas we put on the children’s show Tabby McTat here at the club. The place was rammed, it was fantastic. Tickets should have cost about £18 each, but the company, Freckle Productions, owed us a favour. We plan to leverage our place in the arts world to bring in more family shows like that.

“We also want to run cabaret evenings. Did you know Morecambe & Wise played here? We want to revive that tradition.”

The club was saved by its members five years ago and since then has been run by volunteers. That’s hard to keep going and Slung Low will be paying staff who work at the club. All the volunteers have been offered the chance to carry on, but many have decided to put their feet up.

“It’s fantastic what the members have achieved over the last five years” says Alan. “Holbeck nearly lost its club, one of the oldest clubs in Britain and a cornerstone of the community.”

Slung Low has indemnified the club against losses, can they make the club a paying concern?

“I’m pretty confident” Alan tells me. “Audiences coming to our shows like to have a drink whilst they’re here. So each show is like an extra night’s takings on the bar. Everything the club already does will carry on and we will bring in extra people, extra customers.”

And then of course there’s the Community Cultural College. The bus is now parked up outside the club. It’s fitted out to accommodate classes although many will run inside. The second term is just getting underway with courses ranging from podcasting to fire eating via green woodworking and the choir. You can find all the details at slunglow.org or call in to the club for a chat.

“The bus is a great asset and once we’ve passed our test it will be out and about in Holbeck.”

The story of its move from the HUB sums up Slung Low and its relationship with the Holbeck community.

“A guy booked the club for the wake after his dad’s funeral. He was very grateful and said to me ‘if there’s anything I can do.’ Well, he happened to be a bus driver so I said ‘As a matter of fact…’ and that’s how we moved the bus.”

In the same way much of the redecoration work has been done by volunteers at “Barn Raising” days. Students from Leeds City College came in to help build a new stage and install sound and lighting equipment; whilst KidzKlubLeeds helped to paint one of the rooms.

The future for both The Holbeck and Slung Low certainly looks bright with someone as enthusiastic as Alan Lane at the helm.