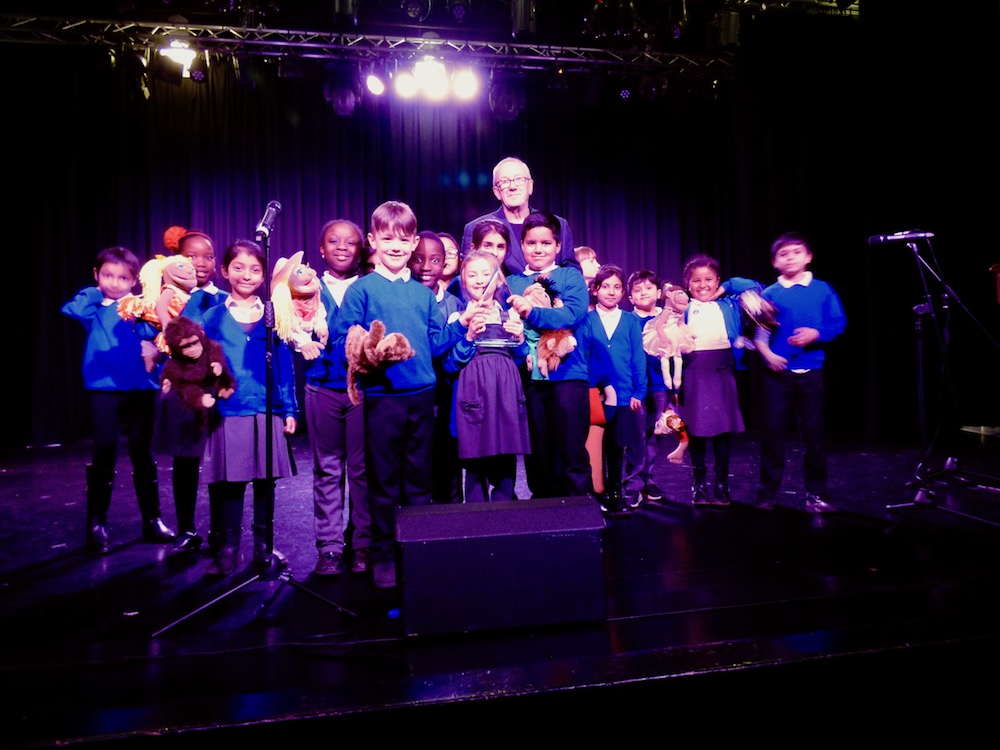 Just before the Easter holiday, teams from four South Leeds schools came together to compete in a Poetry Slam.

The event was held in the theatre at Cockburn School and gave children from three primary schools an insight into life in ‘big school’.

Cockburn Governor and published poet Ray Tough introduced the afternoon reminding the teams that they had been selected as the best in their school.

First up were four Year 7 students from hosts Cockburn School. Their poem explored animal cruelty from different perspectives on a trip to the zoo. They used their phones as props and moved well on stage. The poem was peppered with hashtags culminating with #StopAnimalCruelty.

Next came Middleton Primary School whose poem was about their teachers:

Middleton, Middleton
Year 5
Our teachers are fantastic
and make a difference in our lives

They went on to describe one teacher as “amayonnaising” but warned of her “death stare.”

Beeston Primary used drums to drive the rhythm of their poem about Kensuke, the title character in Michael Morpurgo’s book, which they have been studying.

Finally a large group of Year 3 students from Hugh Gaitskell Primary took to the stage complete with glove puppets. Their poem was called ‘Fun is …” in which they listed all the fun things they like to do. They spoke in unison, no mean feat as this was the longest piece of the afternoon.

The competition was judged by Mary Elliston from NCOP, an English in schools charity and Peter Nuttall, Chair of governors at Cockburn School. Mary thanked all the children saying:

“It was a tough decision, congratulations to all of you for bringing poetry to life in such as lovely way.”

The judges eventually chose Hugh Gaitskell as the winners, praising their enthusiasm.

“At Hugh Gaitskell Primary School, this academic year saw the launch of the ‘Talk Matters’ programme which has put a huge emphasis on the development of speech, language and communication skills across the curriculum. Mrs Flannery, our winning poets’ Class Teacher, is a true ambassador of the ‘Talk Matters’ approach. Today, we saw the impact of this. Our children were confident, articulate professionals, performing on a ‘real’ stage to a ‘real’ audience… we could not be prouder of them.

“All participating poets, from all schools, were fantastic- we certainly have some talented children in South Leeds!”