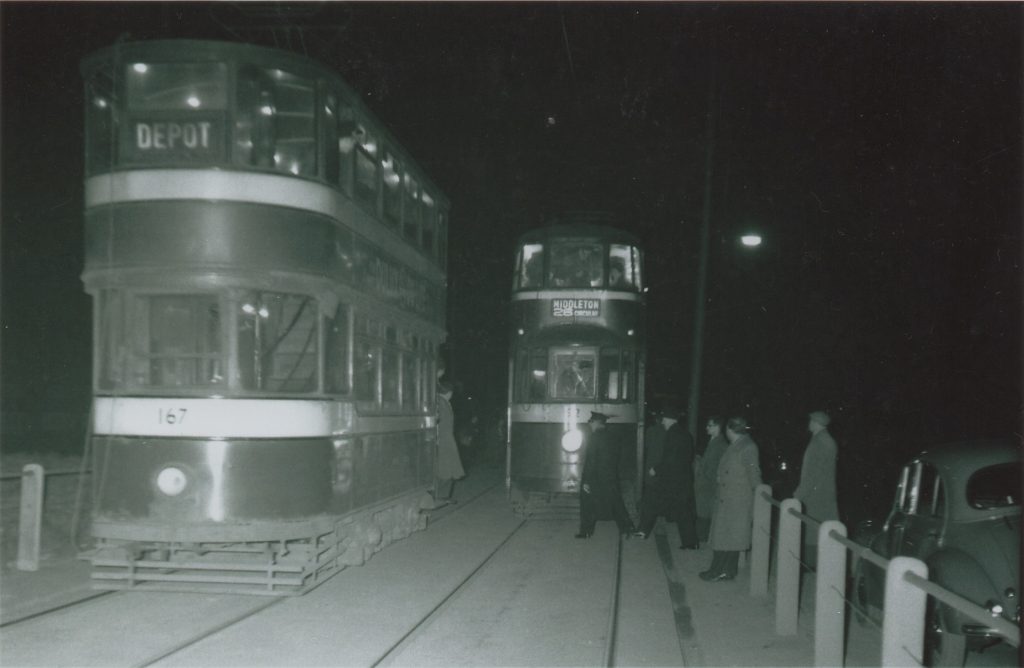 Elsewhere in the city few knew that it existed. In South Leeds in the ‘thirties, ‘forties and ‘fifties everybody knew it was there. They had nearly all been for a ride on it in one of the special trams, which everyone called “Bluebirds.”

Even today in Nottingham, Sheffield and Manchester youngsters are bitten by the tram bug. This happened to me in Leeds before I was three. Born in 1937 and growing up in Beeston, I was soon acquainted with the Middleton route. From Cross Flatts Park you could easily see the trams crossing Farmer Ward’s fields and disappearing into Middleton Woods. After dusk they became strange-looking moving patches of light. On 28 March 1959, from a bedroom window, Mam made a point of watching some of the last ones coming and going.

As your correspondent John Leeming wrote in last September’s South Leeds Life, there was something magical about a walk in the woods with trams passing through the trees. Plenty of them, too. In the peak time, in the 1956-59 period there was a tram passing every three minutes in each direction, on it’s way between Middleton and Cross Gates.

Some older readers (70+) may remember George and Mabel Rowbotham who lived in the gardeners cottage to Middleton Lodge, which them became the golf house and now the cycle hub. They were my courtesy aunt and uncle. We went there throughout the year, especially during the summer to buy the vegetables and fruit which they produced.

In the evening dark you needed a torch to see your way down the steps to the tram stop at the sub station, from which the electrical equipment emitted eerie noises. From age 11 I was allowed to travel unaccompanied. Sometimes an owl called out of the trees, and I hope that the light above the “Tramway Fare Stage” sign would let the driver see that I was waiting there.
Then, for three summers – 1955-58 – I was frequently on the Cross Gates – Middleton – Halton route, as I spent my university holidays working for Leeds City Transport as a conductor. I have vivid memories of the morning peak when collecting fares in a very full tram with from seventy to eighty five people on board, depending on the type of vehicle. It cost 5d to travel to town in 1956 and nearly everybody had the correct fare as we swayed at speed past the water tower and downhill through the woods.

As a nineteen year old I was apprehensive about the other side of the circular route in the evenings. I had heard alarming tales about the behaviour of people returning to Belle Isle after spending the evening at their old pubs in Hunslet. The “Anchor” crowd were said to be the worst as they took the 26 circular home after “chucking out time” at 10pm. I need not have worried, a bit of cheerful banter did the trick.

I have a lovely memory that I’ve collected all the fares and we’re roaring up Belle Isle Road on a “London Car”. Fish and chips are being kept warm on the cupboard hiding the electrical resistances and, on the big front platform, behind the drivers cab, someone is playing the accordion. Ten or so minutes later we’re dashing down through the woods and past the spoil heaps (you can smell them!) en route for Swinegate depot. It was supposed to take 22 minutes from Lingwell Road, but I remember one motorman (driver, to you!) who did it in twelve.

Were the trams noisy? Compared with modern trams in Nottingham and most European cities even half the size of Leeds, yes. Electric motors could emit a humming noise, which I loved. On the express tracks the wheels clicked over the joints in the rails like they did on the railways – “click, click” on the four wheeled “Showboats” and “click, click – click, click” from the bogies under the “Bluebirds” and “London Cars”.

The motion was more of a gentle sway. This has always suited me fine. I’ve never got used to the way buses bounce, swerve and stop in a series of jolts. The tracks to Middleton were in good condition, although in some parts of the city worn and corrugated rails could give a rough, noisy ride.

The No 12 route via Parkside was indeed very special. First time users were often amazed.

Having travelled, aged 12, on the first No 12 Circular on 28 August 1949, I was determined to ride on the last. I made sure of my favourite seat by boarding at the Cross Gates terminus at 11pm. As we travelled along Meadow Lane and onwards and upwards in the dark it was hard to believe that it was for the very last time.

In Brussels there’s a tram route (no 44 Montgomery to Tervuren) along an avenue ten kilometres (six miles) long, opened by King Leopold II, complete with electric tramway, in 1897. It starts with posh houses and gradually reaches the countryside. There are trees alongside all the way and at one point it runs for a mile through some ancient woodland, the Sonion Forest, which is just as old as our Middleton Woods. This year, on 28 March, I intend to ride to Tervuren on a tram that’s been running smoothly and quietly for forty five years. I’ll look out the window and imagine that the Forêt de Soignes is Miggy Woods.

7 Replies to “Riding the last tram through Miggy Woods”