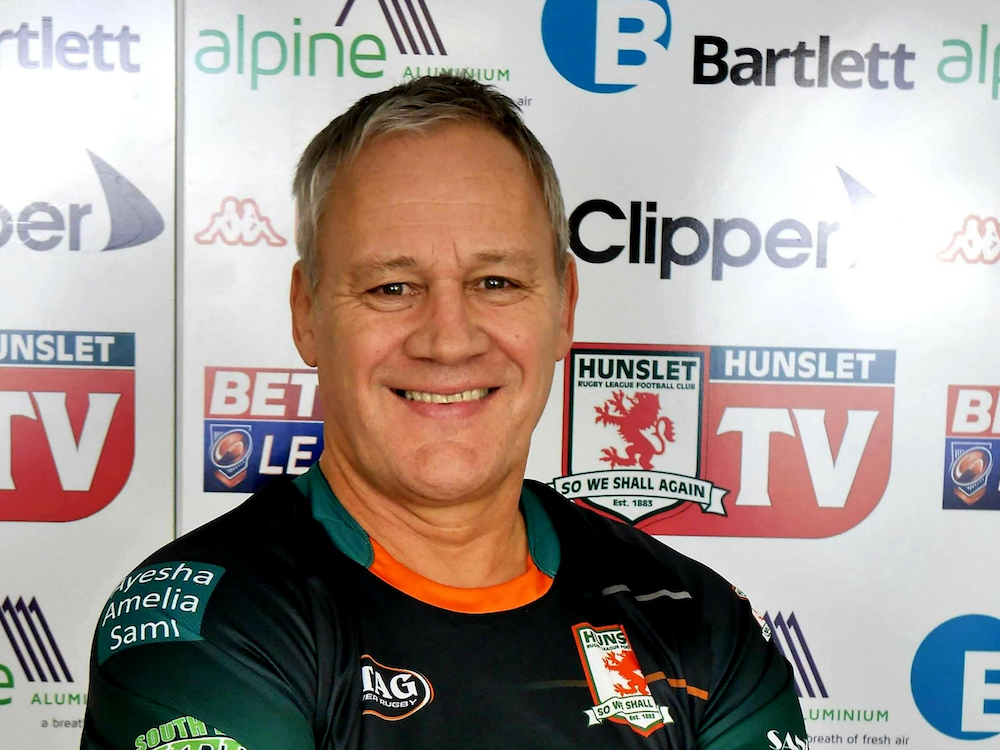 South Leeds Life spoke to Hunslet RLFC Coach Gary Thornton to get his views on the key issues of the 2019 season.

Q: The playoff performance against Workington Town seemed to sum up Hunslet’s season. Very good in patches but falling away in the second half – is that a fair summary?

“It’s difficult to argue with that summary. It’s been very frustrating, and a really disappointing second half of the season, exacerbated by an excellent start to the season which saw us win 7 out of 10, including some tough away wins at Doncaster, Oldham and Newcastle, and a narrow Challenge Cup defeat to Halifax.

“I have encouraged the boys to play an entertaining brand of attacking rugby, and we have played some great stuff at times, scoring some quality tries, just not consistently enough. At times our goal line defence has been excellent too, but again inconsistencies in this area has cost us some cheap tries, and ultimately some vital wins.

“The second half of the season should have, on paper, been an easier run in with 6 home games, but as it panned out, our home form was really poor and that let us down. At the outset of the season it was always our target to make the top 5 and the play-offs, which we achieved, but also one of our goals was to make South Leeds Stadium a fortress. The reason we slipped to 5th from 2nd place, was down to losing too many home games from winning positions, and we must learn from that to ensure that doesn’t happen next season. If we are to be a success we must win our home games, and if we had done this year, we would have been in strong position to finish higher up the table.”

Q: What do you put the high penalty count against Hunslet down to?

“Some very inconsistent refereeing, some poor discipline from some of our players. I wouldn’t say we were ill-disciplined as a team – don’t get me wrong I want my team to be aggressive in attack and defence, but it must be within the laws of the game.

“I have reviewed so many of our games where the penalty count was massively against us with the referees assessors, and they have agreed that some inconsistent refereeing has hurt us at crucial times in crucial games.”

Q: How much did injuries affect the campaign?

“Massively – we have been without some very key influential players, who were major signings for us for large portions of the season. Going back to the very first game of the season where we lost Richie Moore, we have had to work around losing Duane Straugheir, Ben Heaton, Gareth Potts, and Jack Lee for large parts of the season. Big players to replace, especially when they are out at the same time, and it’s been costly.

“In our last playoff game, we were hit particularly hard by injuries. First losing Straff and having to move Vila to cover in the back row, and then losing Wrighty, meant we had no recognised hooker. We lost any threat we had out of dummy half, and lost one of our attacking organisers in a pivotal position. That has a knock on effect having to play players out of position to cover the losses, and losing their effectiveness in the positions they normally play.”

Q: Michael Haley got a terrific send off at his last game, how much will he be missed?

“I was really pleased for Mickey that he got the send-off he did. He has been a fantastic servant to Hunslet and in a day and age when loyalty is a rare commodity with players moving around chasing the best deals they can get, he has been here for the last 6 years of his career.

“In my opinion, he has had his best season since I arrived here, and he is a hugely popular figure amongst his teammates, so yes, he will be missed, but he is leaving for the right reasons so he can spend time with his young family, so no-one can argue with that. He has had a great career and we all wish him all the best in the future.”

Q: What can you tell us about preparations for next season?

“On-going at a pace. We have 9 players staying from this squad, and working hard on targeting players we need to bring in, within the budget constraints that we have to work to.

“Some players are retiring – Mickey, Robbo, Emmett, Pottsy – who will be big losses to us, and others have moved onto other clubs already. Reece Dean has moved into Rugby Union, so it’s fair to say we have a few gaps to plug. But we have made some great signings already which will be announced in coming weeks, and we will continue to try build a competitive squad for 2020, which will hopefully be challenging for promotion, in a league that is improving massively year on year, in both quality and competition.”