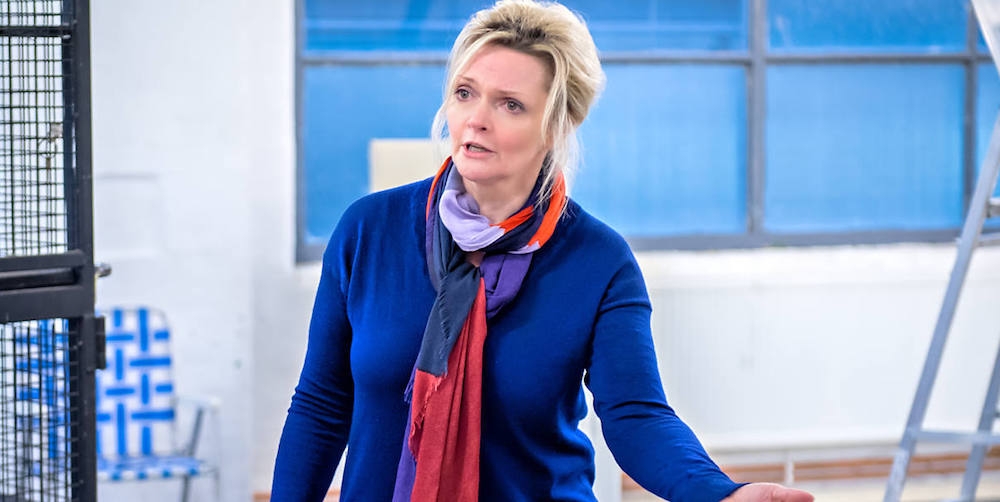 The stage is jam-packed, full of props reflecting the busy lifestyle of professional Alice, played by star of stage and screen Sharon Small.

Alice is a 50-year-old professor of linguistics at Harvard University where she graduated from and is clearly a highly intelligent academic.  Married to John, who also works at Harvard as a research student, they have two grown up children; Tom a lawyer and Lydia an actor.

The play commences with the family dashing about, getting on with their professional lives as well as their personal commitments and is told from Alice’s point of view. The embodiment of her is created by the formation of “Herself”; Alice’s inner voice. This allowed the audience to build up an intrinsic viewpoint of this relationship between the two of them.

As daily life goes on Alice slowly starts to forget things, simple words to begin with and then whilst out on a run she becomes disorientated and loses her bearings, clearly causing concern and resulting in a visit to her Doctor. Alice attends, hoping that it is the menopause causing her to forget, but she is sent off for more tests and eventually to a neurologist where early-onset Alzheimer’s disease is diagnosed. This life changing crisis calls for all members of the family to come to terms with the trauma and frustration of this awful illness.

The play is a dark topic and there are attempts at humour to try and lighten the mood although the sensitive nature of the matter emphasises the tone. The set decreases on stage as her disease progresses and as her mind empties of what it once knew. Family and friends rally round to help her, and it was intriguing to see how their relationships also changed as the disease invaded.

It was gripping when key events in the play took hold and you could feel the poignancy within the audience. When Alice no longer recognised her daughter, or when she didn’t realise her sister had died over 30 years before were such significant events especially for those of us who have experienced such a situation. Her fight to remain independent results in her speaking to medical students about the impact of her illness on friends and family and most importantly herself and how she rises to the challenge of attempting to cope.

Having watched the film some years ago, I was intrigued to see how this would be adapted for the stage as it is not an easy topic to portray. I must give credit to all of the cast and production team in how they have ensured that this sensitive subject is given dignity and hope for all those affected in one way or another by the cruel sword of dementia.

This post was written by Caroline Carr using our Create an article for South Leeds Life page.