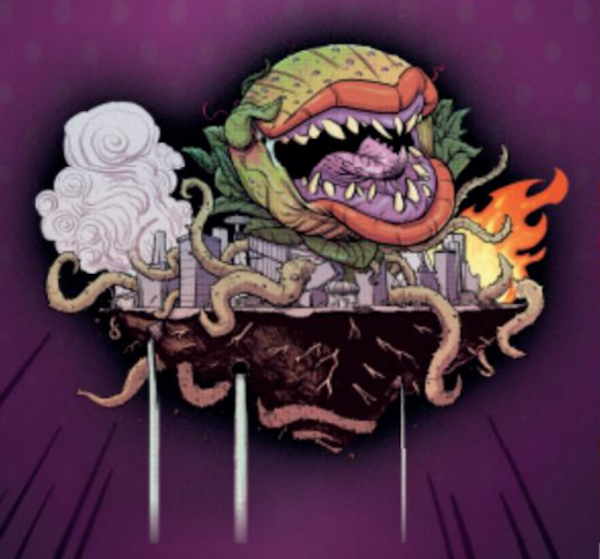 We went along to see Little Shop of Horrors at The Carriageworks on Friday night. This was a coproduction by Bite My Thumb, Gravitas Entertainment and Cutting Edge Theatre and was directed by Neil Knipe.

Little Shop of Horrors has been wowing theatre goers for over 30 years, though I had only previously seen the film version with Rick Moranis playing Seymour.

The set was all grey at the outset, depicting the boring and hopeless lives of the characters who all lived on Skid Row. A flash of colour was provided by the three chorus ladies, who helped to narrate the story and whose voices were all very impressive.

Nerdy Seymour Krelborn was played to perfection by Ronan Pilkington. His comic timing was excellent and his asides and glances to the audience really helped pump up the humour.

As Seymour’s luck changes from discovering the menacing Audrey II, brighter hues than grey crept into the stage set until at the last scenes the set was a riot of colour.

Audrey II was a feat of puppetry and had been created by Sam Curwen (the puppets are available to hire after this run which is a great idea for anyone putting on this show). James Sidgwick voiced Audrey and was absolutely fantastic with his booming, raspy, demanding voice! Despite the extra-terrestrial plant having a threatening auror, the whole production was light-hearted and humorous. So much so that despite there being a number of small children in the audience, nobody got too scared even as Audrey munched away on cast members.

I was particularly looking forward to seeing the sociopath dentist, played to perfection by Steve Martin in the movie version and as such, a lot to live up to. I need not have worried as Joe Hamilton played the crazy character of Orin so well! He had the perfect mix of crazy and comedy. The scene where he is stuck inside his laughter gas bubble was hilarious. The collaboration between the live band, the conductor and the actor was very impressive and the perfect timing of the music added to the comic effect.

The Skid Row Gang played by Tyne Brown, Magnus Cameron and Emily Herbert were full of energy, their dancing and singing skills were really brought to the fore.

Vikki Holmes played a great Audrey. She was troubled by recurrent microphone problems at the beginning of the performance but carried on unphased until the gremlins could be sorted. She had the perfect ditzy nature that Audrey requires, and could really belt out a tune!

Despite it being a grizzly ending for most of the cast members, we got to see the previously masticated characters in the finale, beautifully decked out as plant people and this was a master stroke as it left the audience glad to have seen them all, alive and well.

Based on this performance I will be looking out for any production by any of the three companies who collaborated on this piece. It was fun-packed, fast paced and an excellent piece of musical theatre.