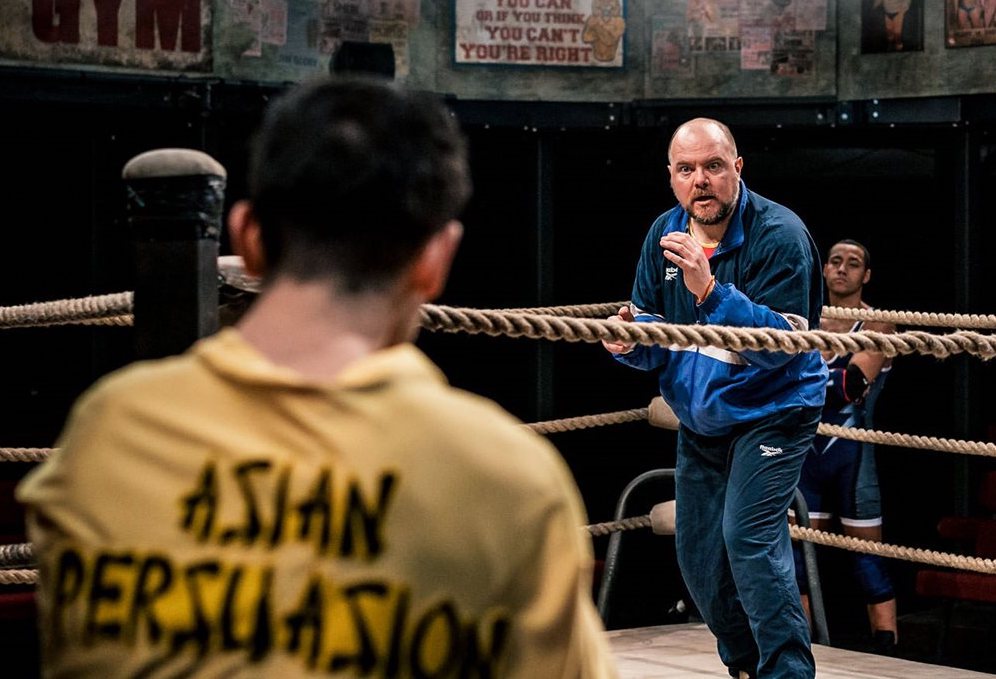 As soon as we entered the warehouse we were entering into the spirit of the production – a wrestling gym had been recreated, complete with ring and inspirational posters. Most of the action took place in the ring and the audience surrounded the stage just as they would at a wrestling match. There were old wrestling posters and lockers and it was very impressive.

We were introduced to Jim Glory, whose glory days as a professional wrestler were now over, gone but not forgotten by Jim. Ben was the first young man we met who was looking for somewhere to train. It was clear he had some pent up aggression and at first Jim didn’t seem to be helping the situation. Jim was surprised that Ben hadn’t heard of him and this opening scene was very funny. Jim grabbed the mic in the ring and regaled the audience and Ben with tales of his glory days.

By the time Dan bounces onto the stage it’s clear that Jim is a bit of a bounder and is not exactly politically correct when referring to ethnic minorities. Tensions quickly rise between Ben and Dan and racial insults are hurled between them. The irony of the racism between the black young man and the Chinese heritage Dan was not lost on the audience.

Dan is told by Jim that people “like him” will never be the hero of the wrestling match and gives him a cape to wear with the caption “Yellow Peril” emblazoned on the back. Jim’s racism begins with a light touch, “bants” if you will, until towards the interval he addresses the audience and talks about it all just being jokes and only language and not meant to be offensive.

I found this part of the play incredibly uncomfortable and although I’d found Jim funny previously, I did not want to laugh along and agree with what he was saying. I found myself becoming furious with this man and his old-fashioned prejudiced ways. As the interval began I found myself hoping that my rage at Jim had been intentionally provoked by the writer. It turns out it was, and I was relieved.

When Sami, a Syrian asylum seeker joins the gym, we find out where Ben’s rage stems from. He wrongly focuses this on Sami. These scenes were incredibly moving not least because of the empathy Ben stirred in me and the futility of turning it on Sami, who had experienced his own atrocities. The actors were so talented and the anger and frustration they felt was palpable. The physicality of their fighting in the ring was exciting to watch and as a member of the audience I felt very close to the action.

I would thoroughly recommend seeing this production, at times it was hilarious and laugh-out-loud funny and at others extremely emotional and heart-rending. I found all of the actors outstanding and the staging really helped to me immerse myself in the story.