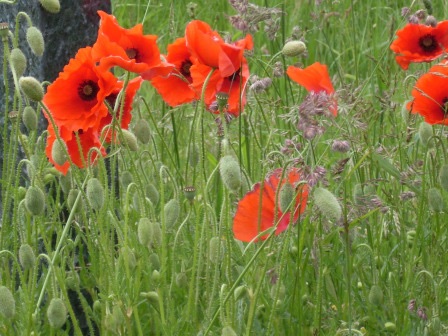 Remembering The Somme Vigil will take place around the Cross of Sacrifice (near Beeston Road). Please join the Friends of Holbeck Cemetery for about an hour as they focus on some of the soldiers who are remembered in our cemetery. Please help us commemorate this historic event. 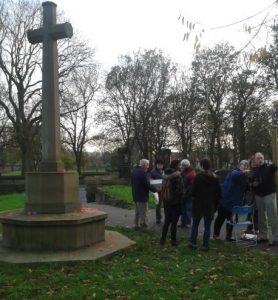 Some soldiers are listed as ‘dying at home’ which usually means that they had died in a British hospital. In Leeds the hospitals used were 2nd Northern General Hospital, the former Leeds Training College at Becketts Park or East Leeds Hospital which is now the Thackray Museum.

Richard Bunkall was one of the soldiers to die from his injuries in a Leeds hospital on 9 November 1916. He served with The Royal Garrison Artillery and his father was the foreman of the Leeds Sewerage works at Knostrop. Another soldier, Harry Stead, was the youngest son of Ezra and Emily Stead and was only twenty-one when he died in hospital. He was in the West Yorkshire Regiment (Prince of Wale’s Own) and he came from a family of stone-cutters and plumbers living at 5 Camden Place, Leeds.

Two married brothers from Holbeck joined the Leeds Pals in early 1915. Tom Pilkington had only recently married and was working as a butcher, his brother, Arthur was a commercial clerk in the local vinegar brewery. While Tom was injured at the Battle of the Somme, Arthur survived after been transferred to the Royal Engineers and was discharged on 23 February 1919.

Some soldiers enlisted when they were underage and they fought in the Somme. At that time many underage boys were being returned from France, but many remained there anyway. We will never know whether they realised that they had this option or not.

Thomas Paul was the eldest of six children and had left school when war broke out but waited until early 1915 to volunteer. A tall well built lad of sixteen years of age when asked how old he was he had told the recruiting officer that he was eighteen and he had been accepted into the Leeds Pals, where he served alongside his cousin, Alfred. Thomas was wounded in battle and sent to the 2/2nd London Casualty clearing station behind the lines where he died on 22 September 1916. Cousin Alfred, aged twenty-three, was wounded on the first day of the Somme and returned to a Leeds hospital where he died of wounds on 24 July 1916.

Fred Mortimer, son of Henry and Mary Mortimer of Nineveh Avenue, Holbeck was twenty-one years old when he died of wounds on 19 September 1916 in the same Casualty Clearing Station as Thomas Paul.

One seventeen year old, Tom Clarkson, died of wounds in St. Bartholomew’s Hospital, London but was buried in Holbeck Cemetery with full military honours on 17 July 1916

In the same week on the 12 July, Frederick Richard Lewis was also buried in the cemetery. Frederick had been severely wounded on 1 July and a couple of days later had found himself on a hospital ship bound for Britain, but sadly he had died of his wounds before being able to reach the shore. Frederick was the first Leeds Pal, who had died in the theatre of war, to be buried in Leeds. 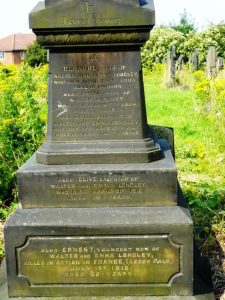 Ernest Longley was a young gifted footballer, who played for Leeds Grammar School, YMCA and Leeds Yarnbury Club. On the outbreak of war he had enlisted with the Leeds Pals on 24 September 1914 and was killed in action on 1 July, at the Somme, where he had been a Platoon Bomber. He was twenty-six years old and came from a wealthy family who owned the Joseph Longley Bedding Manufacturer & Co. The company’s premises had originally fronted Lands Lane. The building is still standing at the junction of Lands Lane and Albion Place and the name ‘Longley’ can be clearly seen on top of the building (YEP 25 May 2016 mentions that this building has been sold for £3.7 million!)

Leonard Clarkson (1st/6th Battalion, Duke of Wellington’s West Riding Regiment) was another nineteen-year old who was killed in action and even though his family came from Wetherby he is remembered on a family grave in Holbeck cemetery.

John William Hainsworth (King’s Own Light Infantry) was 24 years old when he was killed and is remembered on the Thiepval Memorial in France. This memorial is to the missing of the Somme and bears the names of more than 72,000 officers and men of the UK and South Africa forces who died in the Somme sector before March 1918 and have no known grave. Over 90% of those commemorated died between 1 July and November 1916. The memorial also serves as an Anglo- French Battle Memorial in recognition of the joint nature of the 1916 offensive. The memorial was designed by Sir Edwin Lutyens and was built between 1928 and 1932 and unveiled by the then Prince of Wales in the presence of the President of France on 31 July 1932 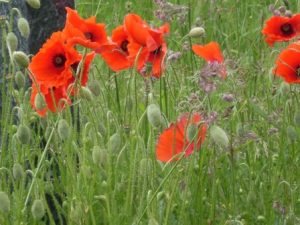 Private John Fell, West Yorkshire, Prince of Wales’s Own, is also remembered on this memorial.

John William Milner, an Engine Pattern Maker and general engineer who had lived with his wife, Hilda, at 14 Ledbury Street, Beeston Road before enlisting in the West Yorkshire, Prince of Wales’s Own, died on the first day of the Somme aged 36 and is remembered in Serre Road Cemetery no 3, France.