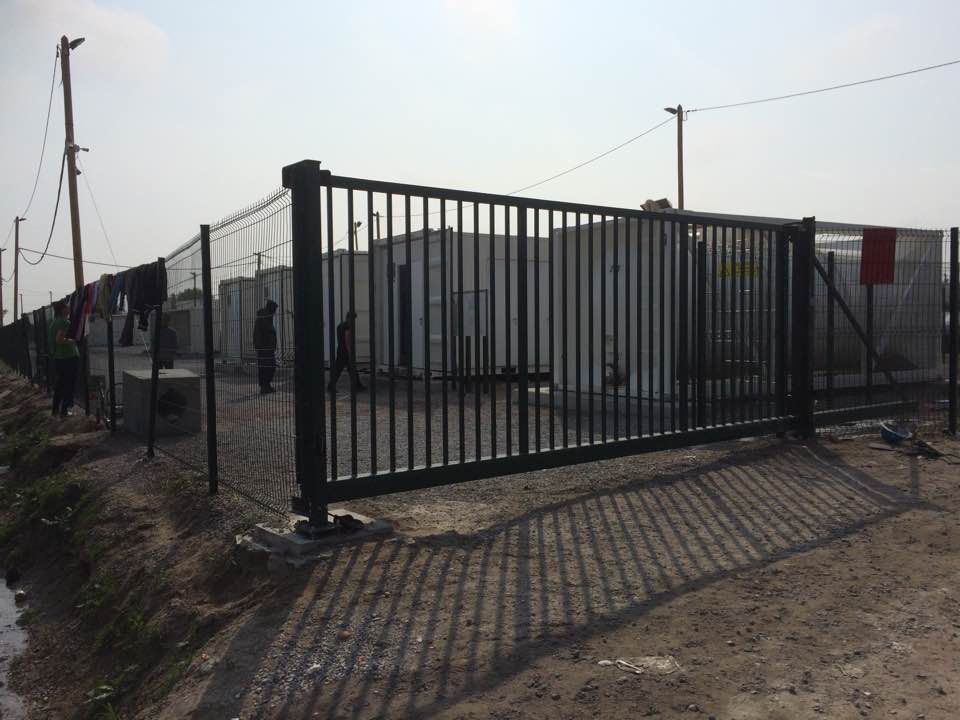 I travelled to Calais last week with a group of trade unionists from Wakefield, where I work, to take much needed supplies to the migrant camp at Calais. 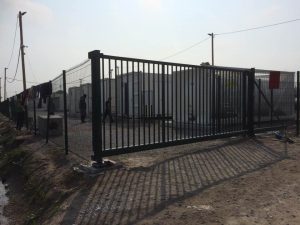 A few weeks ago the camp around the little school was bulldozed, by order of the Court. Only the wooden buildings of the school, the youth centre, info point & church from were allowed to remain. The people made homeless by the destruction of their shelters were forcibly moved into the shipping containers behind this locked gate. There are 9 people in each crate – no choice who you are with. Entry is controlled by biometrics. No visitors. The yellow sign says “For your safety, you are being filmed.” And yet, this is not a prison camp.

It reminded me of when I visited the Nazi concentration camp at Buchenwald. Sun shining, birds singing, people living ordinary lives a mile or so down the road. And then the camp. This is happening in Europe today.

I’m still struggling to process everything I saw and heard over the weekend.

I saw the saddest, most exhausted and angry-looking little boy, squatting in the dust with his exhausted father and another young man outside their tent. At 2pm on a sunny Sunday, too tired and too sad to come and play football, cricket or volleyball. I was later told he was unaccompanied, and that they were trying to help him.

I met a bruised and hobbling young man, his head cut, stitched up and bandaged because he had been batonned and kicked by the CRS – French riot police – who ring the camp.

I heard about a frightened 15 year old who had walked for months from Afghanistan in the hope of joining his brother in Coventry, and who is stuck now, not knowing how to progress his claim, with the Home Office not responding to his brother’s calls.

I met a group of cheeky lads 10-14, smiling, witty (and wet), returning to their tent with the basket of clothes they’d been washing, who told us they “come from London”, who “watched the world through gunshot eyes” and graciously but carefully deflected a student’s request to photograph them “In these clothes? We’re too wet and dirty!”

I met a gorgeous 18 month old toddler, peering out from a caravan window, with Mum, who high-fived and bye-byed us, while the men of the family outside looked on. 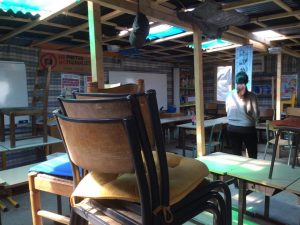 I walked with volunteer teachers from Trades Unionists for Calais to the family encampment, where rats run like squirrels around caravans and tents, and saw a wonderfully unexpected adventure play structure. We collected 6 & 8 year old sisters from a family of five, who want to go to school on a Sunday. We sang nursery songs in English as we walked across wasteland to the little school, then drew pictures, cut out patterns and made paper “quackers” (that’s what I call them – they used to be called fortune tellers) before we had to leave.

These children spoke brilliant English – not fluent, but coming along, which possibly diverts from underlying emotional issues. How must it be when a succession of adults befriend, play, but don’t stay? No wonder that the 6 year old wept silently when after her teachers left, while her sister was defiant, angry and uncooperative until we left, when she clung like a limpet to each of us in turn.

And then there are the volunteers, many of whom look to be exhausted, overwhelmed and in need of support themselves.

So much to think about.

This post was written by Sue Talbot using our Create an article for South Leeds Life page.