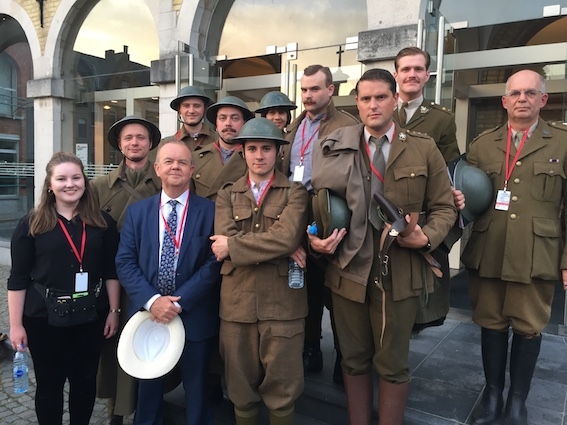 Last weekend (30 July 2017) I travelled to Ypres, Belgium, along with the rest of the cast and creative team of ‘The Wipers Times’ in order to participate in the commemorations for the centenary of the Battle of Passchedaele. Known as the Third Battle of Ypres, Passchendaele was also one of the bloodiest, with around 325,000 Allied and 260,000 German casualties over the course of 100 days.

For a young woman from South Leeds, I found myself in the unlikeliest of positions: shoulder to shoulder with Dame Helen Mirren as the BBC took over the small town of Ypres with a huge memorial event including a full military orchestra, readings from actors including Daniel Mays and Nina Sosanya, scenes from ‘War Horse’ and our own ‘The Wipers Times’ and haunting music from the National Youth Choir of Scotland.

From a personal perspective, the chance to visit Ypres was a chance to see the land where my own relatives had lived, fought, and died. My great great grandfather’s cousin, Fred Morton, is engraved on the memorial wall at Tyne Cot – the largest British military cemetery in the world – which we also had the opportunity to visit on Monday as part of the In Flanders Fields commemoration.

It was a very moving service, not least because I was seated just in front of his panel, having recently discovered that he was of the same regiment whose story is told in ‘The Wipers Times’ itself. He was killed during the 100 days of Passchendaele, as were the ancestors of many of the guests who joined us in Flanders for the weekend’s commemorations, some of whose names and stories were read during the service, along with some of the final letters their families received from them.

Trying to picture our beautiful surroundings as a mud bath was near impossible, but it was a trip I feel very lucky to have been part of. I had never imagined that I would be part of such an enormous event and I feel privileged to have been a small part of a very emotional weekend.

This post was written by Hanne Talbot using our Create an article for South Leeds Life page.