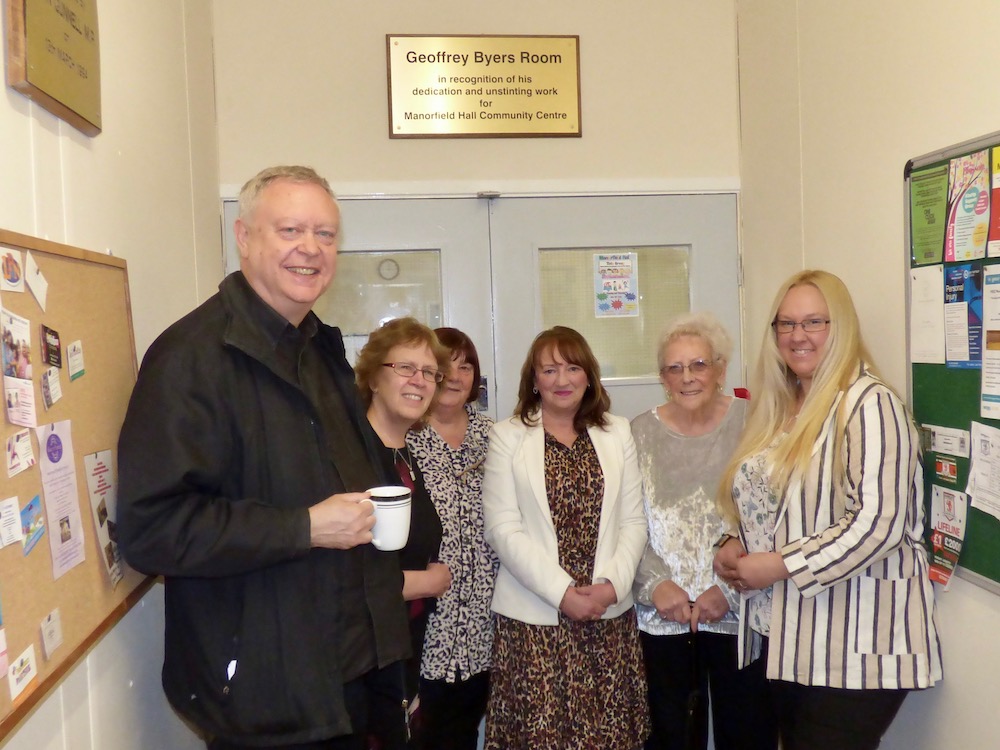 The hall has been named in honour of community stalwart Geoff Byers, who died in January this year, in recognition of his dedication and unstinting work for the centre over many years.

“It has taken several years to raise the funds. We’ve been helped by BITMO and in October we started the work replacing windows and doors, laying a modern hard wearing floor, decorating internally and updating the kitchen.

“It looks a lot more homely, a lot more inviting. There is still a long way to go, but wouldn’t got this far without the work of a guy who showed lots of support for this place – Mr Geoff Byers. Which why today we wanted to dedicate something to all his hard work as well as the rest of the committee.”

“I first met Geoff in 2010 and it was immediately clear to me how much he loved his community and this is his legacy.”

Speaking of his battle to prove that the hall belonged to the community rather than the Council, she went on:

“I remember the day that officers came and confirmed that the building indeed belonged to the community. That would never have happened if he had not persevered and kept pushing us Councillors to investigate for him.

“I will never forget the first meeting I had with Geoff here. He was just a master of coming over as someone who was really serious and really severe, but you could see that twinkle in his eye. He commanded such huge respect because everyone knew that he was here on behalf of the community.

“His memory will continue and it will inform all of us of the standard that we have to work to, to ensure that we provide the very best quality on behalf of everyone in the community.”

Geoff’s widow Ivy Byers then cut the ribbon and everyone got the chance to explore the renovated space, enjoy a buffet lunch and of course have some celebratory cake.

A full list of candidates standing in Middleton Park ward in the forthcoming Leeds City Council elections is published here.