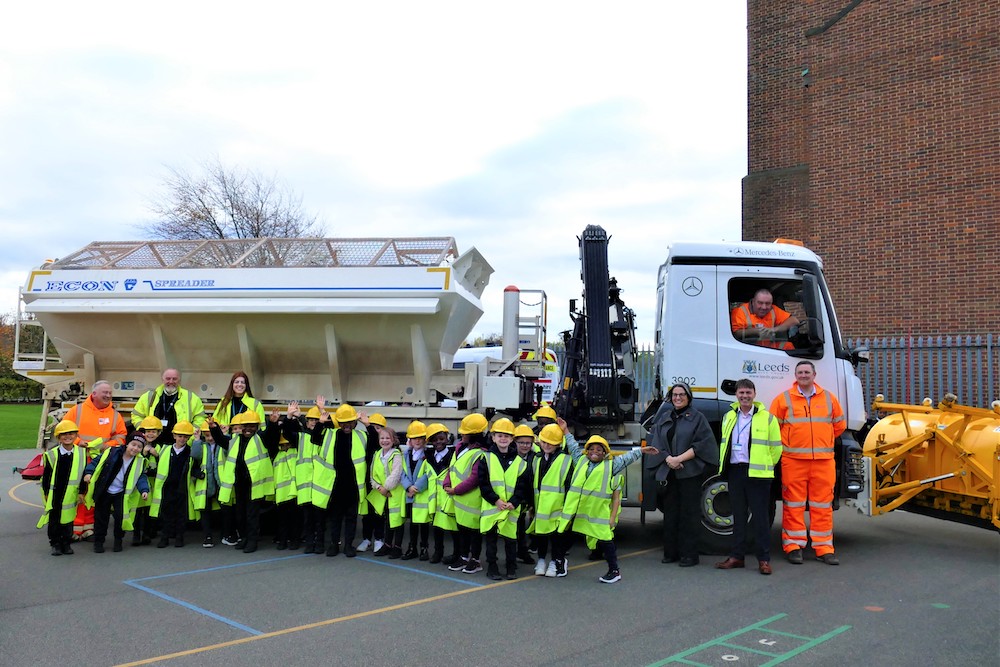 Leeds City Council has launched its ‘Name the Gritter’ competition, which is soon to be rolled out to all Key Stage 2 pupils across Leeds.

School kids across Leeds will then have the opportunity to take part in the exciting competition and win prizes, with judges from Leeds City Council picking winners based on the most creative names. Once names have been chosen, pupils will be visited at their school by their named gritter.

On Friday 11 November 2022 members of Leeds City Council’s Highways team joined Councillor Helen Hayden at Corpus Christi Catholic Primary School to launch the competition. The team provided a presentation on winter safety and informed the children of the work carried out during the winter period.

As part of the visit, the children were visited by a gritter, which is one of 30 gritting vehicles that ensure Leeds’ main roads are safe for residents every winter. The vehicles are on hand every 24 hours, seven days a week, from October to late spring, and on average, collectively drive 51,200 miles every winter period.

In addition to the competition, Leeds City Council have launched a live gritter tracker map where you can view gritting vehicles in real-time, your nearest grit bins, and recently gritted roads in the last 12 to 24 hours.

“I’ve enjoyed being a part of the launch for the ‘Name the Gritter’ competition. I’d like to wish all the children from Corpus Christi, and the rest of Leeds, the best of luck in coming up with some creative names for our winter service gritters.

“The council’s highways team ensure Leeds roads are safe and clear during the snow and freezing temperatures every year, and I look forward to seeing the named gritters helping ensure residents can get around safely this winter.”

Primary schools will be contacted by Leeds City Council with competition information and gather entries from their pupils. Entries close on Friday 9 December 2022 with winners being picked in February 2023 by the council’s Highways team.