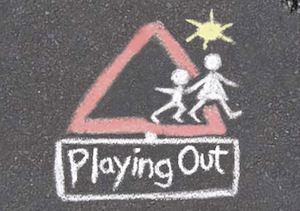 On Saturday 19 March 2016 Leeds Play Network in Hunslet hosted a workshop on how to organise your own on street play session. Co-founder and director of ‘Playing Out‘ Alice Ferguson had travelled up from Bristol were the temporary road closures first begun in 2009. 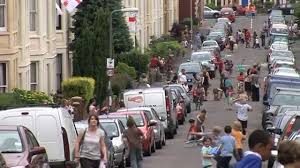 Alice explained how she and her neighbour came up with the idea of an after-school road closure to allow their children to play out freely on their own street. Since then the process has been rolled out in streets in different cities across the county. The Street Play project at Play England encourages communities to help organise their own temporary street closure. The residents can still use their cars and are safely escorted to and from their spaces outside their home by volunteer stewards. Supporting evidence from ‘Active, Healthy Communities’ project funded by the Department of Health show the benefits to children’s health and wellbeing regarding physical activity levels.

We discussed why less children ‘play out’ than adults did years ago. Maybe it’s got a lot to do with moral panics, that parents are reluctant to let their children walk home from school or play out, for fear of traffic and the ‘stranger danger’ element. Although we all agreed that the fear over enjoyment element is blown out of proportion, it was probably just the same in 70’s and 80’s, but the fact that we know more about stories from the media keeps our children ‘safely’ inside and less exploring outside.

Are electronic games and hand held devices keeping children away from playing outside, or is it the fear of the unknown outside keeping our children in? There were queries regarding the safety of traffic and fear of children walking out in the road when the street closure was not in operation. But, Alice reassured us that the street sessions have raised more awareness of traffic among the children helping them understand the difference and danger more.

Leeds Play Streets is keen for more residents to get involved and can help with filling out forms and providing a ‘street play pack’ with high visibility bibs, a whistle and lots of other useful bits. Residents do have to organise the street closures themselves and the more work that goes in at the start helps makes the playing out successful.

There are four steps to follow; (these can also be found online here)

There has been a street closure in Belle Isle recently which I will find out more about in the following weeks.

Playing out is an important part of a child’s life. 71% of adults used to play out compared with 21% with children today. If we don’t encourage our children to play out now they will never know what it means. It’s up us, those of who remember, to keep it alive and act now to help create safe environments for children in their own street to play out.

4 Replies to “Organise your own safe Play Street”