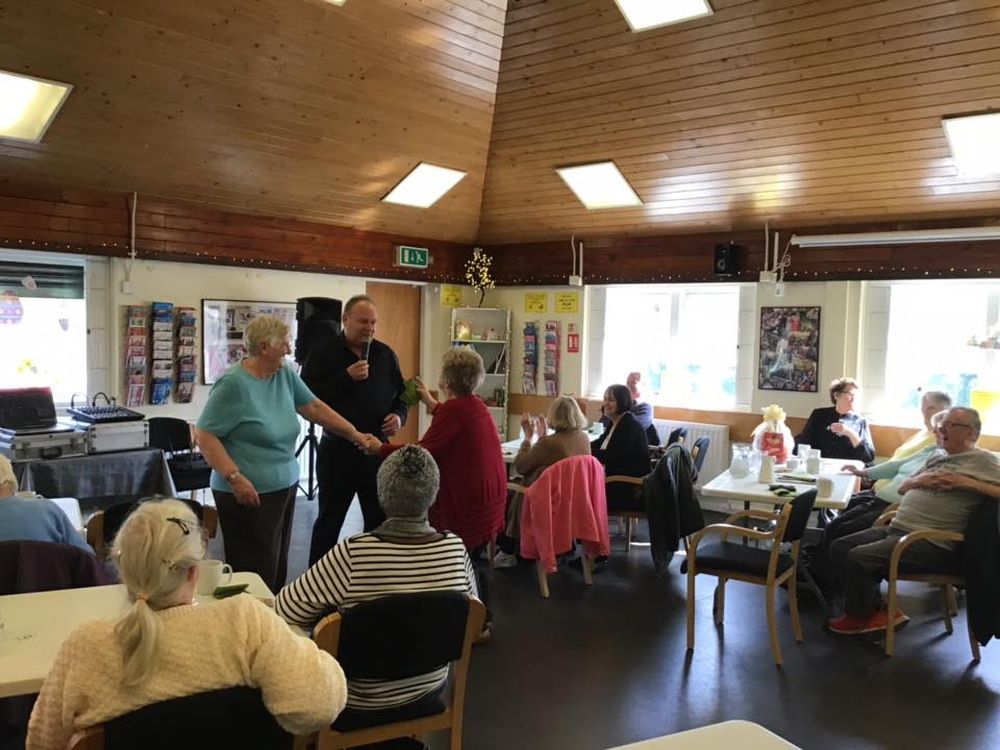 After a record number of people (9 plus 2 dogs) came out on the Arm in Arm walking group last Wednesday (3 April 2019), we came back to the Middleton Elderly Aid centre to enjoy some entertainment with Paul Holt, a singer and comedian originally from Bradford, but now lives in Blackpool. That’s a good town for him to find work.

The first half was made up of mainly jokes and second half songs from the 60s, Neil Diamond seem to be Paul’s favourite singer and songs from the Rat Pack.

I had seen him before at our holiday hotel last year in Llandudno and more recently at Middleton Elderly Aid.

Samantha, the Centre Manager, got the butt of the car jokes, but I can’t repeat them here.

The first time I saw him at Middleton, he was very quiet, definitely the opposite on Wednesday.

A bit of heckling from Lydia brought out the best from Paul. Giving as good as he got.

The more the blue jokes, the more laughter came from the audience. I must admit, how he told the jokes without swearing I don’t know. Well, just 1 f-word.

I counted 5 men and about 60 ladies in the centre. Where’s all the blokes? Even Lydia gave Paul a massage.

At half time we had our buffet on a plate. Entertainment and a buffet for £3.00 – you cant go wrong.

We had a raffle of a hamper drawn at half time and won by Barbara.

Lydia and Joyce and Mavis again continued to wind up Paul in the second half.

The last joke before he packed up to go back to Blackpool (I can’t put joke on here), had the audience howling with laughter. It involved a sister, trying to find her uncle in Australia.

Paul, did a bit longer stint than usual. Poor staff waiting to tidy up for Thursday at the centre, I’m sure they did not mind.

Cant wait to see him back at Middleton Elderly Aid at Christmas time.

“Paul James, comedian and singer at MEA was very entertaining. The songs were easy to listen to and Paul got us up dancing. The jokes were very good. Everybody had a great time. Also the food at half time was very good, crisps, sandwiches, quiche, Viennese whirls and hot drinks. All included in the price of £3.00.”

“Thank you to Paul Holt for a great show at our social centre yesterday and travelling all the way from Blackpool for a couple of hours.

“You are a star and looking forward to the big show at Xmas.”

“It was my pleasure to come to Middleton Elderly Aid. Looking forward to seeing you all again.”