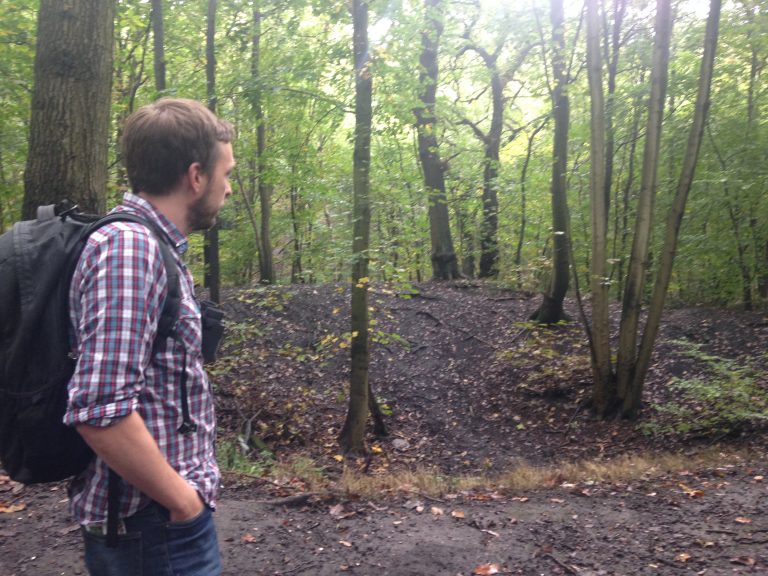 It’s a complicated place, this. I like complicated places – and the fortunate thing is, it turns out that all places are complicated, if you look at them closely enough. Looking closely was what I was here to do: to look closely, and to share what I saw.

Jim Jackson, one of the volunteer Friends of Middleton Park who do so much to keep this place alive in underprivileged (overlooked, underfunded) south Leeds, initiated me into Middleton’s history in the course of an early-autumn walk. He showed me the old coalpits among the oak trees, the still-running colliery railway, the grassy unmined clearings where the pit-ponies used to graze; he pointed out the site of the old Middleton manor, and the tumbledown remains – only recently discovered – of the household’s ice-house; we walked along mountain-biking tracks, beneath the b-movie screams of jays in the woodland canopy, up the fungus-rich fairway of the grown-over golf course; from the top of the park – an eminence known as ‘Nick’s View’ – we looked south-east, miles to the south-east, seeing far beyond Leeds, to a horizon marked by the monumental power stations at Eggborough, Ferrybridge, and Drax.

I left the park that day with my imagination humming. A complicated place, like I said. Centuries of history – millennia, if you think about the age of the ancient forest, and, more than that, the age of the stone and coal beneath, the eons that formed and shaped this region’s ever-shifting geology – are butted up here against 21st-century phenomena (bike tracks, signboards, wifi coverage, discarded dog-poo baggies, a kid who says he’s on Climate Strike fishing by the pond, a brand-new playground, and – what’s this? – a writer in residence, of all things, trudging through the drizzle in a leaky anorak, making notes about toadstool varieties and local brick manufacturing). 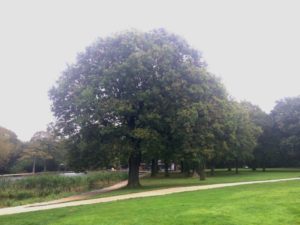 You get here – or anyway, I got here, eventually – by bus from Leeds, taking your chances with a grab-bag of commuter routes serving Belle Isle, Hunslet, Beeston, Middleton itself, and a few out-of-town shopping precincts. It’s not a scenic journey in the usual sense of the word but if ‘scenic’ can mean ‘there’s always something to look at’ (and I say it can) then it’s as scenic as anywhere else, if not more so. It’s not a route that you’d expect to drop you at the edge of an ancient woodland chiming with crisp nuthatch calls, but that’s what it does. I always take the first path into the park, close to the water tower (is it only me that can’t look at a water tower without a feeling of mystified reverence, thinking what mighty civilisation built this thing?).

As Writer in Residence, I was given – along with the title, robes of office and legal right to drive my sheep up Middleton High Street any time I wanted – the very pleasant task of leading a group of enthusiastic writers around the park, talking about history, nature, writing, and whatever else happened to enter my head. I gave a mini-lecture on robin song; I failed to identify a wide range of fungi; I enthused about the inner machinery of trees; I went off on one about biofuels and Drax; l resorted again and again to Jim Jackson’s endless fund of local knowledge (rather wishing that he was available to download as an app); I read a bit from Keith Waterhouse’s memoir City Lights, a foundational text in any serious sort of South Leedsology; I went on (and on) about leafmould and magpies and long-tailed tits and squirrels. We saw a kingfisher: it shot out into the air over the lake, and hovered for a while, like a skylark, a good twenty feet above the water. 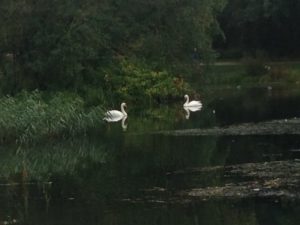 Afterwards, in the café, we ordered in sandwiches and mugs of tea and worked through some exercises in creative writing. I hoped the group would find the park as marvellously, richly, complicatedly inspiring as I did (and do); I hoped for varying perspectives, layered depth of focus, a fertile creative mulch of ideas and impressions and influences – and my goodness, I was not disappointed. We worked from maps of the park, some old, some new, some zoomed-in, some broad-focus. Just to see, I said, what it triggers; what comes out. So we had murder fiction kicking off in the ‘ouija woods’; we had kids rabbiting, forest burials, meditations on the mineworks beneath the leafmould; we had the widescreen birds’ eye view of a spaceman plummeting to earth; we had Kandinsky outlines and the flutters of Isadora Duncan scarves in the contours of the coalfields.

I’m going to write more about Middleton Park (I’m still the Writer in Residence, so it’s either that or be ritually defrocked by the park elders) but I’m not sure I’ll come up with anything as good as the work the group conjured that afternoon, amid the stop-start racket of the café’s malfunctioning radio – conjured from the trees, the mud, the milky-white afternoon light, the stories from Middleton’s history, the autumn birdsong, who knows what else. These writers – they wouldn’t all call themselves writers, but that’s what they all were – looked, and thought, and wrote, and made something magical. I didn’t have much to do with it, really. I might have helped a bit with the looking. Really I just offered a way in – they, and the park, did the rest.