The preferred route of the second phase of the national high-speed rail project was released today by the Department for Transport and HS2 Ltd, showing how the new line will come into Leeds. The announcement also confirms the revised plans released last year for Leeds Station to be remodelled into an integrated ‘Yorkshire Hub’ to accommodate HS2 alongside regional and local services. 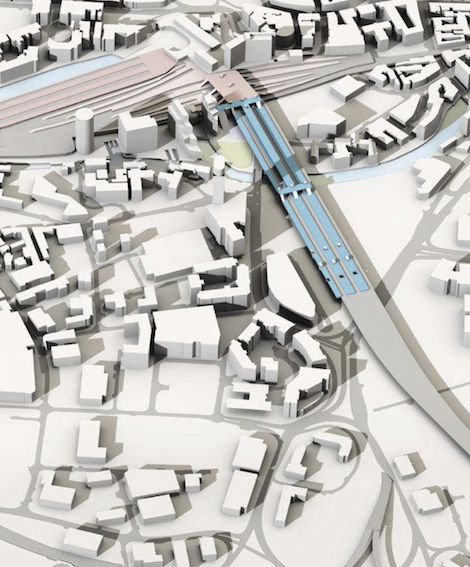 “This is very welcome news not only to provide further confidence that HS2 will be completed in its entirety but also to offer certainty in that everyone can now know exactly where and how it will come into Leeds. That is hugely important as now planning at all levels can be carried out in an informed way around HS2, what it means and where it will go.

“This announcement also confirms the remodelling of Leeds Station as a single integrated transport hub, which is very pleasing as it is a key element of the South Bank Leeds development which aims to provide more than 35,000 jobs, over 4,000 homes and educational facilities for over 10,000 students.”

Leeds Station is already a vital piece of national infrastructure being the busiest station in the north of England used by over 100,000 passengers a day, with those numbers forecast to more than double over the next 30 years reaching a level similar to Gatwick Airport.

The ambition set out by Leeds City Council and partners is for Leeds station to become a key national landmark and transport interchange featuring high-speed HS2 and Northern Powerhouse Rail (formerly known as HS3), as well as being a pivotal regeneration and economic driver and asset for the city and region. The redevelopment of the station is expected to provide approximately 13,000 new jobs in Leeds.

It also has a key role to play in the regeneration of the South Bank area of the city, which would effectively double the size of Leeds city centre delivering 35,000 jobs and 4,000 homes.

The creation of the full HS2 network is considered essential in order to offer improved rail services, addressing capacity issues on the existing rail network, and to be used as a catalyst for growth especially in the north and the midlands as a way of developing and rebalancing the national economy.

The HS2 line will use the existing route through Hunslet (the Castleford line) before rising onto a viaduct and arriving at the new station located close to the existing Asda House on Great Wilson Street.

“HS2 will be the largest single investment in transport ever in north of England and it will deliver a transformational change to growth and jobs in West Yorkshire and the Leeds City Region economy. The combined authority is committed to a £1bn-plus programme of transport developments and recent successes have included the recently-opened new rail stations at Apperley Bridge and Kirkstall Forge and the award-winning Leeds Station Southern Entrance.

“I am pleased the plans announced today have confirmed the opportunities for HS2’s integration with the Northern Powerhouse Rail network, which the combined authority wants to see providing much-needed improvements to links between Leeds, Bradford, York and Manchester.

“We will be continuing to impress on HS2 Ltd the importance of work with communities along the route on the local implications, and we will also be calling for construction of HS2’s Yorkshire leg to start, in Yorkshire, as soon as possible.”

Leeds City Council has also today released an interim growth strategy to show how high-speed rail will benefit the wider Leeds City Region. The strategy looks to maximise the opportunities provided by HS2 to realise growth combining innovation and productivity with more and better jobs, improved skills and career progression and environmental benefits.

The strategy outlines progress in these areas to date and commits to delivering a fully integrated strategy for the remodelling of Leeds Station. To see the interim growth strategy visit www.leeds.gov.uk/HS2