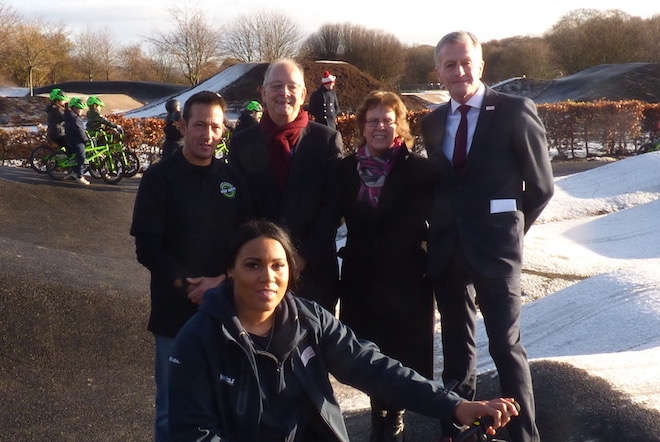 Speaking at the opening Cllr Judith Blake (Leader of Leeds City Councillor and member for Middleton park ward) spoke enthusiastically about the growth in popularity of cycling in Leeds since the Tour de France Grande Depart in 2014. She said she was particularly pleased that the bike hub had been located in Middleton, making it accessible to young people who don’t always have the opportunity use such facilities.

Speaking about the closure of Middleton Park golf course, she said:

“It was a very painful process, but the golf course couldn’t hold its own. As local Councillors we were determined that something special would replace it, something that will deliver for young people in South Leeds.”

As we reported last month, the Bike Park features BMX, pump and mini-pump tracks as well as MTB trails. The former golf clubhouse has been refurbished and extended to create a café, shop and classroom and the car park has been enlarged. These facilities are available for everyone to use whether you are a cyclist or not.

“Cycling’s future depends on the grassroots, not just the elite riders. This facility really hits the nail on the head, catering for both. I’m impressed how Cycle Pathways have really engaged with the local community.”

Alan Shaw, Chair of the Friends of Middleton Park commented:

“This is a great investment for the Middleton Park. This is a new chapter for the park and we look forward to welcoming many more people to enjoy this fabulous green space.”

“The completion of phase one of work on the Leeds Urban Bike Park is a very exciting milestone. One of the many reasons for cycling’s growth in popularity in recent years is the diverse range of ways in which people can enjoy riding their bike, be that recreationally, for transportation or competitively.

“This facility will not only allow people to experience cycling in many of its forms, but will be a true asset to the community, giving children, families and beginners – alongside more experienced riders – the chance to enjoy one of the city’s green spaces in a different way.”

Referring to the new Middleton parkrun due to start in the New Year, he went on “Cycling will be front and centre, but it’s important for its sustainability that there will be other activities taking place here.”

The £1.2m development has been funded by British Cycling and Sport England in partnership with Leeds City Council and Cycle Pathway CIC who will manage the hub.