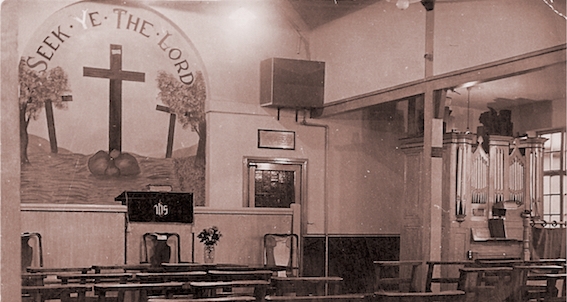 Over the weekend of 21 and 22 January Middleton Park Baptist church will be celebrating 90 years. The church fellowship started meeting before January however, the first recorded members meeting took place on 20 January 1927. So how did it all start?

Towards the end of the Great World War (1914/1918), the Coalition Government of David Lloyd George coined a phrase: “Homes fit for heroes to live in”. It was not before time. Many of the great industrial cities of the nation had dreadful housing – the slums. Rows of back to back houses, often one up and one down, sharing sanitation – as many as ten households to a privy or WC.

In the early years after the war Leeds was slow in slum clearances, believing that huge road schemes like York Road and Dewsbury Road would cut through the slum areas causing them ‘to whither off the vine!’ In 1920 Central Government inspectors reported Leeds and a severe rebuke of the City Council ensued and the great developments of ‘townships’ on the outskirts of the city were planned. Middleton and Crossgates were the first two of these.

Work commenced on house building on the Middleton Estate in 1922. Amongst the first houses built were those on Middleton Park Avenue, Middleton Park Mount and Acre Road East. Often the streets were named after the farms whose fields they now over-ran; the Sissons, the Acres, the Throstles and Lingwells.

This met the physical and material needs. Nevertheless, how could the spiritual needs of Middleton folk be addressed? Of course, Middleton’s name was not new. There had been a community here for centuries, though its parish church was four miles away at Rothwell. A traveling curate would occasionally come and serve the farming and mining villagers. 155 years ago the parish of St Mary, Middleton was created. It was huge, taking in Stourton, Belle Isle as well, as Middleton. Just over 100 years ago, the Methodist Chapel was built but there had been a Methodist society meeting in cottages near the park gates from the late 18th century. However, these two Christian churches (very much rivals in those early days) would be unable to cope with the huge population explosion in the 1920’s.

In 1923 the Yorkshire Association of Baptist Churches and the Leeds Churches Extension Society (Anglican) both applied for sites for what was to be Middleton Park Baptist Church and St Cross (then known as Holy Cross) Mission Hall, a wooden utility building, later to have the handsome building we now know.

The Start of the building

Both prospective church building groups were offered approximately 1.86 acres of land on the Middleton housing estate. The Yorkshire Association of Baptist Churches offer stated that it was for the erection there-on of a building for religious or education purposes for the sum of £550, subject to approval of the Ministry of Health and to a contract to be approved by the Town Clerk and that the Common Seal be affixed to the necessary documents”.

In 1924, the Yorkshire Association of Baptist Churches reported in their Year Book the generous foresight of the Leeds South Parade Church Trustees in setting apart one-third of the proceeds of the sale of their premises for new work

The Association set-up a buildings committee and it chose Messrs T Wills, architects of Derby and Skegness to design a school chapel for the Middleton site.

In that year, 1925, the YBA Yearbook, Council and Secretary’s Report “welcomes Rev. G.C. Matthews to the new Middleton, Rothwell and Ardsley Group’. It also reported, “Plans have been accepted for the premises at Middleton”.

The 1926 YBA Report mentions the new churches; “Encouraging commencements have been made. Sunday Schools have been formed which already promise to fill the buildings and with G.C. Matthews at Middleton, they are full of enthusiasm and hope for really great things.” Interestingly the Manse was a council built house on Middleton Park Avenue bought with a mortgage for £480.

The 1927 YBA Yearbook records “Three new churches were received into the Association’s membership…. one on the extensive housing estate of Middleton”. It goes on to report overflowing Sunday Schools. “The Middleton church was so embarrassed by a Sunday School too numerous for successful working that the Council, with the aid of the South Parade Trustees have added a capital Primary Room which immensely helps the whole work”. The Leeds City Council Improvements Committee also provides an insight of Middleton’s success with young people; “Minute; A letter was submitted from the Secretary of the Middleton Park Baptist Church asking for permission to erect a temporary wooden building for a Sunday School on the site for a church on the Middleton housing estate”. “Resolved – That permission be granted subject to elevation”.

Whilst the date and details of the first church service cannot be found, the first recorded Church Meeting was held 20 January 1927 under the leadership of the Rev. G.C. Matthews with 24 present.

Having stated the above we know that Middleton Park Baptist Church’s first minister was appointed by the Yorkshire Association of Baptist Churches as the church building was being constructed in 1925. He was the Rev Gerald Charles Matthews and would have been 26 years of age when he took up the Middleton appointment, which was a joint-pastorate with the Rothwell Baptist Church. It was his second pastorate; he had been at Boston, Lincolnshire, and a very much more established church dating back to 1651.

Certainly, those early days at Middleton appear to have been very promising. It was in 1927 that the first baptisms (by full emersion) were recorded, the only ones conducted by Rev G C Matthews on the 6 January 1927.

The Church Book recorded the church’s annual statistics: Membership 22, Fellowship Members 28. Average congregations of adults – morning 20 and evening 65. The weeknight service attracted 8. The Sunday school had on register 360 scholars with an average attendance of 230. There were 20 teachers. The Young People’s Bible Class numbered 8. There were 18 members of the choir. The Women’s Meeting had 64 members with an average weekly attendance of 30.

That was how Middleton Park Baptist church started. During the weekend of 21 and 22 January, the church will be holding a couple of special services. A member has written a more detailed history from this first joint pastorate to the one in 1981 with Gildersome Baptist Church.

On Saturday, there is an exhibition of events over the 90 years right up to date. We are expecting to meet and share with lots of old friends. The church will open at 1pm and there will be a Service of Celebration, Praise and Thanksgiving at 2pm.

On Sunday, there will be a Service at 10.30am and again there will be an opportunity to view the exhibition until 1.30pm. If you are interested in the history of the church or want to know what the Baptist Church is all about why not come. All are welcome.

The plan on Monday following the weekend is to start some building work to install disable access and a disabled toilet and to relocate the kitchen so that it is on a level floor this will enable the church to open its facilities up to the community.

This post was written by Rose Austin using our Create an article for South Leeds Life page.

One Reply to “Middleton Baptists to mark 90th anniversary”