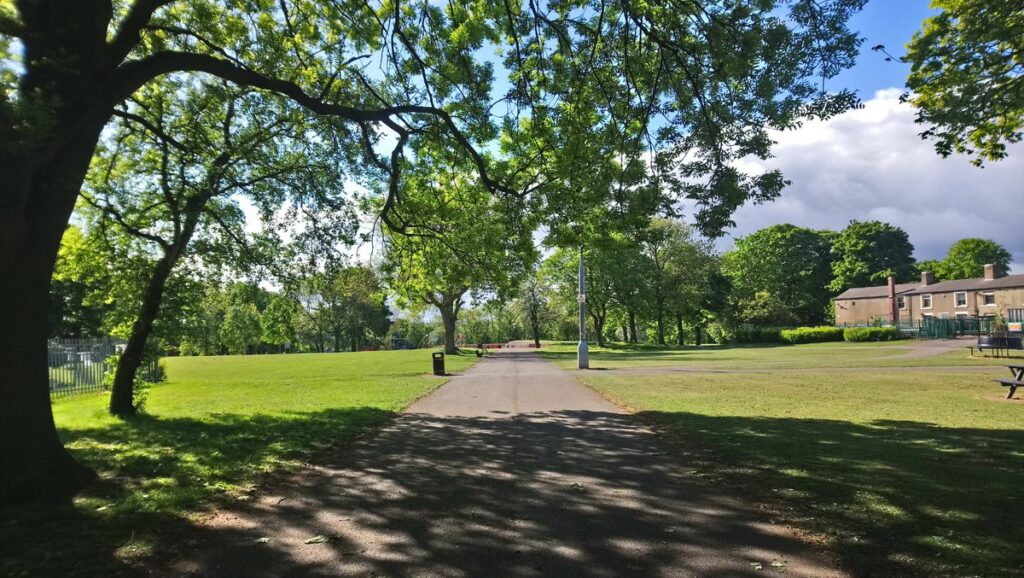 Taking exercise during the lockdown has made many of us appreciate our parks more. Cross Flatts Park in Beeston lies at the very heart of the community is enjoyed especially by those who haven’t got gardens of their own. We asked a long time Beeston resident for her memories of the park …

Cross Flatts Park was acquired by the Council for the bargain price of £12,000 with a Grand Opening in July 1891.
There’s some fascinating information produced by Leeds University researchers on the website futureofparks.leeds.ac.uk

Although I was born in Middleton and only came to live in Beeston in 1940, my parents and maternal grandparents were all Beeston people. My parents were born in 1895 and I’ve no doubt that they were wheeled in their prams in the newly opened park.

Father was from a family of 10, and mother had 4 siblings – all of them played, and later courted in the park, and eventually so did many of their offspring – me included.

I remember winters, sledging with my sister down the slope beside the steps near the Wooler Avenue gate. Those steps were in good repair then, of course, and in summer there were flower filled urns at the ends. Where they fork into a Y shape, there was a curved stone seat.

There was an aviary, near where the Park Depot is now. Also some toilets, but alas they attracted perverts and I recall, as a 9 or 10-year old, my heart pounding as a man followed me in one day. Luckily I came to no harm. There was a Gents at the Dewsbury Road end too. Both facilities were demolished in the end, mainly due to mis-use.

During the War England’s beaches were fortified, so we could no longer have seaside holidays. “Holidays At Home” was the slogan, and Leeds City Council introduced attractions in parks. Most summer week-ends there would be a concert of some kind on the bandstand. In my memory (which I admit might be faulty) the bandstand was a little bit to the north of where the Watsonia stands now. There was a kiosk where you could get deckchairs, and the concerts were well attended. The acts were mostly local people, musicians, comedians, dancing troupes and singers.

My sister was 8 years older than me, so was of an age to go dancing at the Big Top. This was a large marquee set up on the tennis courts parallel to the path from Maud Avenue to Wooler Avenue. Dancing was to live bands, with records in the interval, and of course was very popular. Pat was an attractive girl and acquired numerous boyfriends there. She was called up for National Service in 1943 and left home but she still went to the Big Top when she came home on leave.

In later years, when I was old enough to have boyfriends of my own, good use was made of the bench on the veranda of the Bowling Pavilion after dark! We never feared going into the Park at night, and although the pavilion itself was locked up, the bowling greens (3 of them) didn’t need to be.

When did people become so disrespectful of public property? As youngsters we were fearful of the Park Ranger, uniformed and wearing a peaked cap; if he saw us walking on the grass he would wave his stick and shout “Get off that grass”, and we would run away as if we’d done something really wicked. Of course that regime was somewhat draconian; after all, grass is for playing on isn’t it!

I believe (again I could be wrong) it was during the war years that the railings round the park were taken away. I do know that we all had to sacrifice the cast iron railings round our gardens “for the war effort”, but I don’t think the tons and tons of metal harvested throughout the country were ever put to good use. Whatever, the lack of boundary railings eventually led to cars frequently being driven into the park and set alight, and by the late 1990’s our lovely park was in a sad and sorry state.

Fast forward to the 21st Century, when I became a member of two voluntary groups, Beeston in Bloom, and later Friends of Cross Flatts Park. Twenty years on, I look back with some pride on the improvements our efforts have achieved. Boundary railings, an exercise trail, the Millennium Garden, Bands in the Park, Annual Dog Show, improvements to the Watsonia Pavilion, Community Orchard. Beeston Festival, Park Run, Lantern Festival – all set up and maintained by other groups of dedicated volunteers – and probably loads of other things I don’t even know about.

Of course, without our wonderful Parks and Countryside management and staff (now much reduced following years of budget cuts, and more recently due to Covid 19) we wouldn’t have a park to volunteer in. I’d like to take this opportunity to thank them publicly for their co-operation, and their hard work resulting in a park for everyone to enjoy.

4 Replies to “Memories of Cross Flatts Park through the decades”