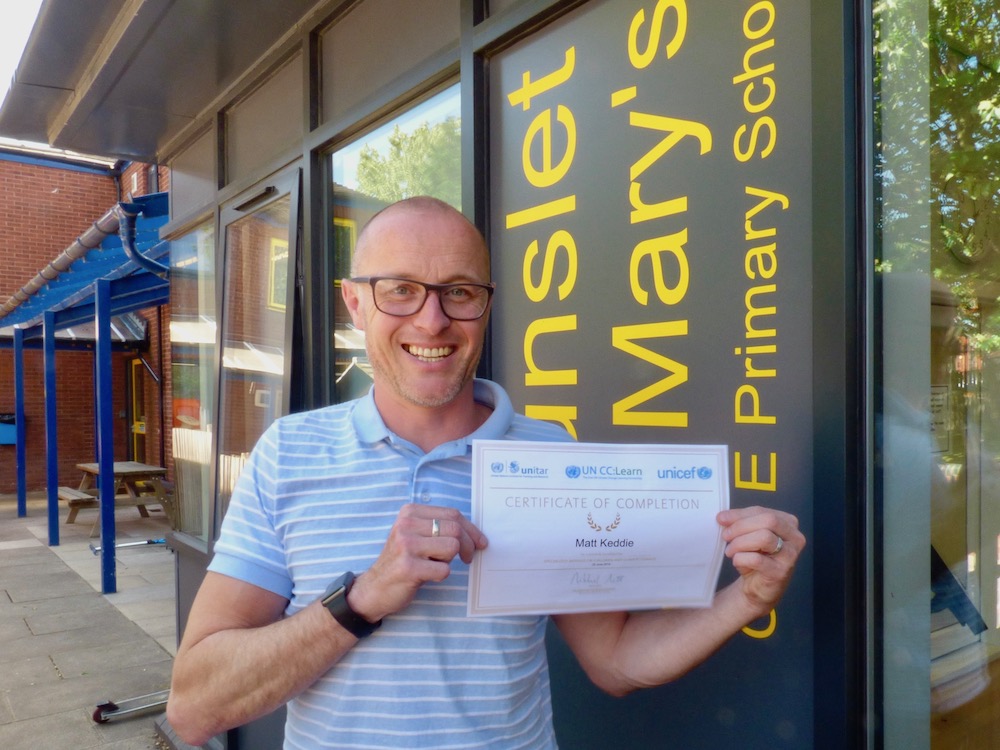 What do you do when a knee operation keeps you off work? If you’re teacher Matt Keddie you find an online training course and get accredited as South Leeds’ first United Nations Climate Change teacher.

Rising global temperatures are leading to more extreme weather events – heat waves and droughts, but also storms and flooding. Like many local authorities and the UK parliament, Leeds City Council has declared a ‘climate emergency’ and is encouraging us all to make small changes to reduce our carbon footprints.

“Children need to learn about how they can make changes in their lifestyles and the habits of their families. Children, as we know, can be very persuasive so I feel they can have a positive effect on their families” explains Matt.

Matt’s first big project this year is to make Ecobricks from waste plastic. Ecobricks are made by collecting non-recyclable plastics, cutting them up and filling a container. If the container is filled to the right density, the resulting bricks can be used structurally. Matt hopes to build planters and benches with the children’s bricks.

He will be working with children at his own school, Hunslet St Mary’s and neighbouring Hunslet Carr Primary School. Matt will lead one session each half term through the year, taking assemblies and creating items such as draft excluders for children to take home.

The project has been set up through Endorphins CIC, a not-for-profit company Matt set up to help run after school activities. It is supported financially by the Council’s Inner South Community Committee, eco developer CITU and Intelligent Facilities Solutions. It has also roped in partner organisations including the LS-TEN skatepark, City Block Climbing and The Hunslet Club who will provide rewards for the children.

Of course one teacher cannot change the world, so another part of Matt’s new role is to help other teachers embed climate change topics into the curriculum. For example a maths lesson could examine data about rising temperatures, or children could write about storms in an English class.

As well as developing teaching resources himself, Matt can draw on the growing number of climate change teachers in Britain and around the world through a Yahki online platform.

I asked Matt about his views on the recent Extinction Rebellion protests in Leeds and the Schools Strikes.

“I don’t think children at primary school are politically mature enough to make decisions about joining a protest” he says. “But I would like to think that some schools might organise an activity around climate change in school on the same day, or even take a small group to the protest.”