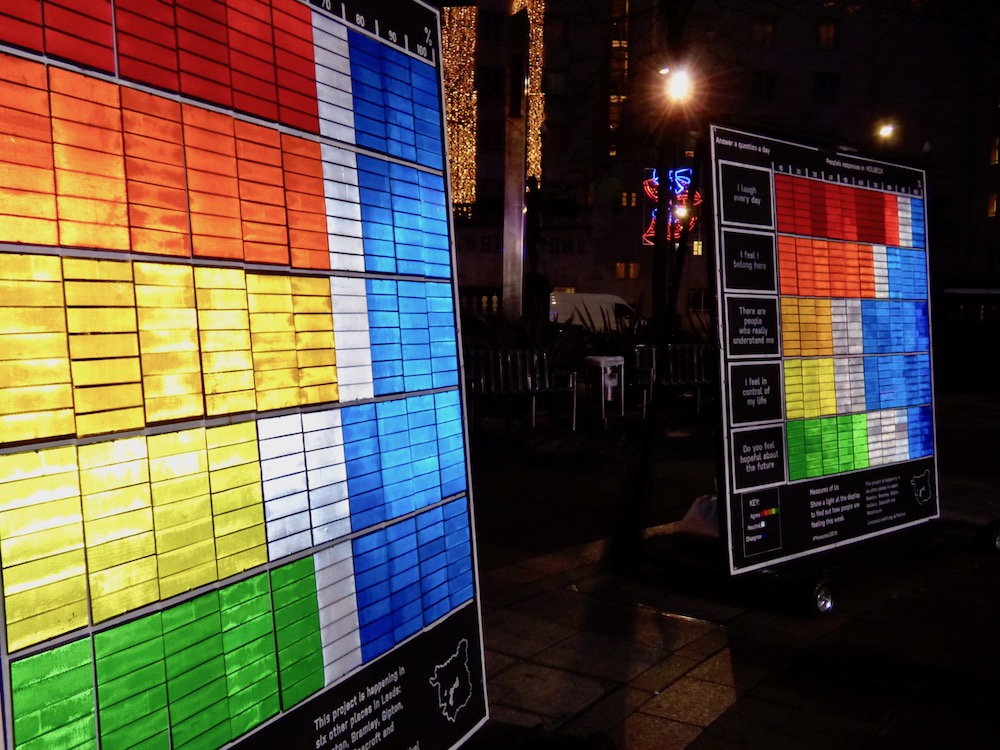 For a week in November, people in Holbeck and Beeston, as well as four other communities across Leeds, were invited to answer a question a day about how they were feeling.

Voting boxes were located in chip shops, community centres, pubs and clubs and results were posted each day on giant roadside boards. On Saturday 24 November, all six boards were brought together in City Square.

This wasn’t a scientific survey, but rather arts project. As Rob Hewitt, one of the artists behind the project, explained:

“Measures Of Us is like a litmus test for the mood of the city, it turns feelings into colours.

“Art is here to challenge and to question. It should disrupt everyday life, in a good way. This project has started hundreds if not thousands of conversations which we don’t see on the boards. Behind the numbers and the ratios there are a lot of stories. For example many people who said they laugh everyday said that if they didn’t laugh they would cry.

“Everyone who’s voted, everyone whose just walked past and had a think has been part of it. It’s great to see people supporting something like this, it might seem random, it might seem strange, it might seem odd, but they all said ‘Yeah, we’re up for it’ so that’s been brilliant.”

Rob gave examples of some of the conversations behind the answers:

In answer to the question “I feel I belong here” one woman was really angry. She was from Leeds but was being persecuted by a neighbour and felt she didn’t belong. Another, Asian, lady said she didn’t feel she belonged not in the wider local community, but in her own community.

“We have recorded over 6,000 votes across the project. That is 6,000 moments when people have stopped and thought about how they are feeling.

“I want to reassure you that the data that was collected here will not be used to inform Council policy or anything else, it’s used to inspire conversation.”

Measures Of Us was part of the Compass Festival, a city wide festival of live interactive art projects.