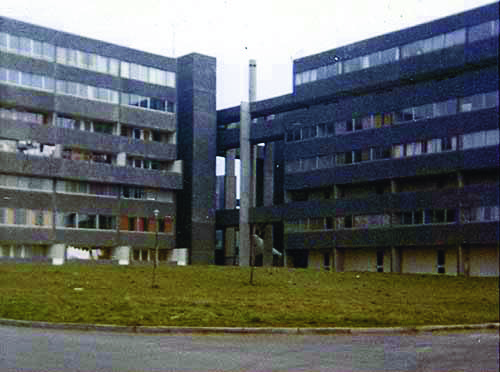 Do you remember Hunslet Grange? This is the question that Gill Crawshaw and Louise Dwyer, students at Leeds Arts University, put to members of Holbeck Elderly Aid’s memory café last month. They tell us why they were asking and what got them interested in Leek Street Flats.

We are both students at Leeds Arts University (formerly Leeds College of Art), doing a Masters in Curation Practices. This means we are learning about the field of curating – of art, heritage and much more. One of our projects this term is called “animating the archive” and we have been working together to shed new life on an item in one of Yorkshire’s many archives.

We were excited to discover a film from 1968 in the Yorkshire Film Archive, called Community Builder. This showcases the development of Hunslet Grange, also known as Leek Street Flats.

Primarily aimed at the construction industry, this short film shows a great slice of south Leeds life at that time. From back-to-backs with a tin bath in the kitchen and shared outside toilets, to the move to a brand new estate and its flats with all mod cons, we see scenes of family and community life.

Where once people gathered on the doorstep or the street, they later gather on the balconies and walkways of Hunslet Grange.

Children play out together, under the watchful eye of parents. At first their games take place on the cobbled streets, but at the end of the film the concrete playgrounds and paths surrounding the flats have become the children’s territory.

Further research in the local history library confirmed that Hunslet Grange was opened fifty years ago this month. Knowing a little of the history of this development, we gathered more information.

The flats became infamous, blighted with a range of problems arising from their prefabricated construction methods, which were considered innovative at the time. Cold, draughts and damp, combined with an electric heating system that was prohibitively expensive for the majority of tenants, led to problems of condensation and mould.

Following a long campaign for improvements to living conditions by its tenants, Hunslet Grange was demolished in 1983 – a mere fifteen years after it was opened by the Lord Mayor.

Of course, there’s much more to the story than that. Reading reports from the time can tell us a lot, but first-hand accounts can really bring an archive to life.

Holbeck Elderly Aid is one of the nearby neighbourhood networks that supports older people. We visited their memory café at Ingram Gardens to show the film and talk about housing, neighbourhoods and communities.

We discussed whether something had been lost when tower blocks and other multi-storey housing replaced the old terraced houses. Communities were split up and people moved to different areas and lost touch with friends. This led to isolation for some people, while others managed to form new communities.

This was certainly the experience of one visitor to the memory café, who had lived in three different flats on “the Leekies”. Her abiding memories were of a close-knit community, neighbours who would help each other out and mind each other’s children. It was great to hear her happy memories, in sharp contrast to dominant narrative of Hunslet Grange.

The next stage of our project will be showing some of the archive materials, along with film clips and other information, to students and staff at the university. It will be interesting to see what issues this might raise for a younger audience, and the parallels between situations past and present.

South Leeds Life would love to hear from our readers about their memories of Hunslet Grange. Were you there at the opening ceremony on 27 March 1968? Did you move from the old back-to-backs into a new flat? Did you play out as a child living on the estate?

Email your memories to us at info@southleedslife.com, or to Gill and Louise at: curationstreet@gmail.com.

Hunslet Remembered meets at Hunslet Library, off Church Street, on the last Thursday of every month, 10am-12pm. Contact South Leeds Live At Home on (0113) 271 6201.