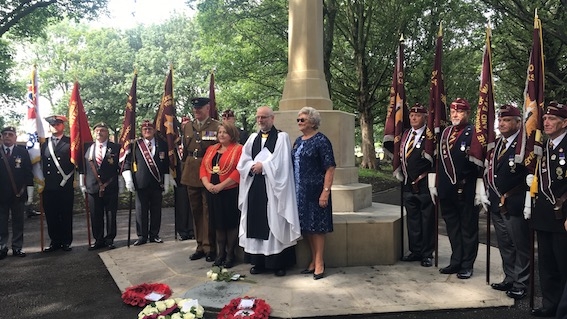 Sunday (11 November 2018) marks the 100th anniversary of the armistice that brought the First World War to an end. Services and acts of Remembrance are being held across South Leeds to remember the local men and women who died in the armed forces in both World Wars and other wars since 1945.

The Remembrance service at St Mary’s in Beeston is at 9.30am and includes a very moving act where the congregation bring up poppies as the names of all the people of the parish who have died as members of the Forces are read out.

At 10am a wreath will be attached to the ‘Welcome to Hunslet Carr’ sign and 57 home made poppies will be tied to the benches and wheel to represent the 57 people from Hunslet Carr that were killed.

There will be an Act of Remembrance at St John & St Barnabas Church in Belle Isle at 10:55am, followed by a Requiem Mass for the Fallen in the church.

There will be a service at the Cenotaph in the grounds of St Peter’s Court on Dewsbury Road (near the junction with Hunslet Hall road) at 12:50pm.

Cottingley Church will be holding a service starting at 10:45am. It will be followed by refreshments and laying poppies in community centre garden.

Hunslet Church of the Nazarene on Lupton Street have a special Remembrance Day service at 10:45 am. All welcome to attend, come in your uniform if you are a member of a uniformed organisation, wear your medals or those of a close family member (on the right if they are a relatives).

The war dead from both Middleton parishes, St Mary’s and St Cross will be remembered at a service at St Mary’s church on Town Street, Middleton at 10am. Just before 11am the congregation will move outside to the cenotaph for the two minutes silence when the names of those that died from both parishes will be read out. St Mary’s will also be joining in the national bell ringing at 12:30pm.

As previously reported St Luke’s Church in Holbeck will be leading an Act of Remembrance at Holbeck Cemetery from 10:50am. The two minutes silence will be observed and wreaths laid at the Cross of Sacrifice.

There is no event planned at The Tetley art gallery, but members of Tetley’s staff who died are honoured on a plaque in the reception area. Family members are welcome to visit and lay wreaths or poppies.

Finally, residents of south Leeds – including Ed Carlisle and Stuart Petch – were involved in leading the recent campaign with the Leeds Civic Trust to commemorate George Edwin Ellison with a plaque at Leeds railway station: click here for further info. Ellison, a resident of Richmond Hill, was the last British soldier to be killed in action in World War One; the plaque is now mounted on New Station Street.