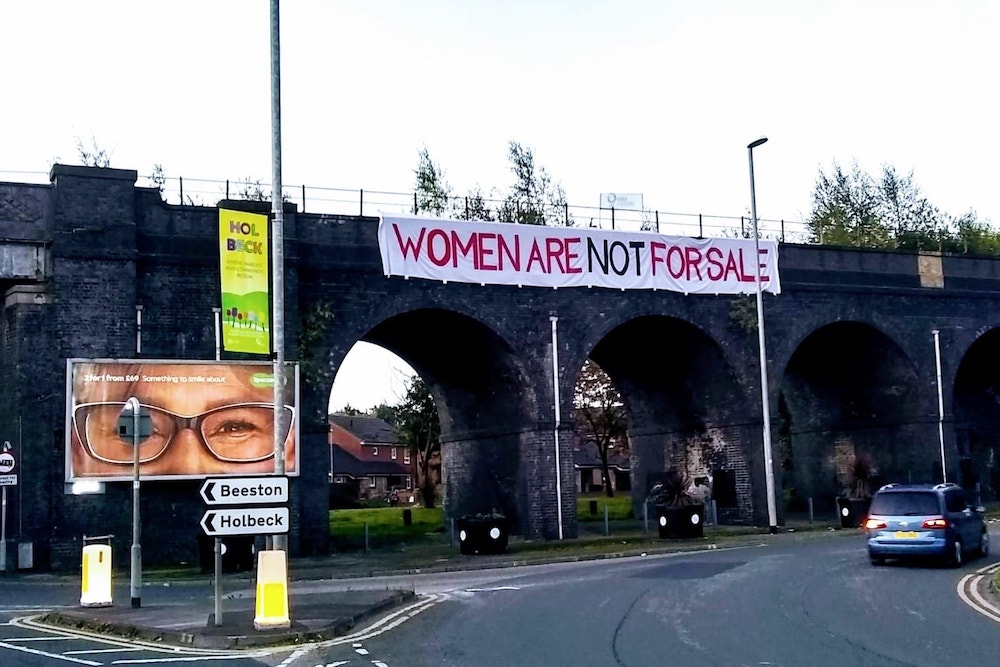 Another banner was unfurled in Holbeck yesterday (14 September 2020) protesting against the continuation of Safer Leeds’ Managed Approach to street sex work in the area.

Feminist group Leeds ReSisters hung a banner from the disused Holbeck Viaduct at the bottom of Domestic Street with the message ‘Women Are Not For Sale.’ The banner was weighted with £5 in loose change, which they said represented the price of oral sex in Holbeck.

This is the third protest in a month of action, following another banner on Whitehall Road and a vigil on Holbeck Moor on Saturday 5 September where members of Leeds ReSisters were joined by members of Save Our Eyes and the newly formed Stand Up For Holbeck group.

“There’s women in the city who feel its rather ironic that Leeds is aiming to be a woman-friendly city, but completely overlooking the fact that we have the equivalent of a red light zone in a poorer area of our city.

“There’s been a recent review that we don’t really think was particularly independent, that didn’t take into account sufficiently the problems that local people have faced and the issue that Leeds has a long history of violence against women.

“We’re thinking about women who’ve lost their lives and how the presence of the managed zone has an effect on male attitudes towards women in the city.”

Michael from Stand Up For Holbeck added:

“We’re just fed up with what the Council are doing. They’re abusing the residents, they’re not taking any notice of the residents.”

An Independent Review of the Managed Approach, undertaken by academics at the University of Huddersfield, was published earlier this summer. A report from the Listening Well project which discussed the issues with residents is still awaiting publication.