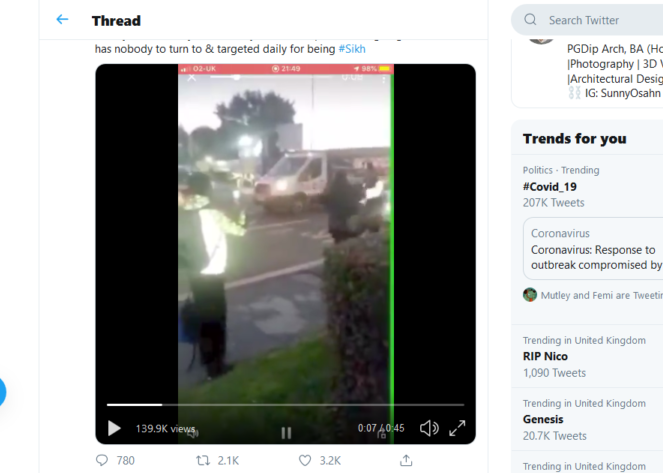 A local teenager has spoken out about finding himself this past week at the centre of furious social media storm and police investigation, in which he’s been portrayed – falsely, he insists – as a racist bully. Two videos featuring Hashir Khan, 15, of Beeston were shared online last week (Thursday 27 and Friday 28 February 2020), have now been watched by tens of thousands of people, and provoked an out-pouring of debate and aggression.

One video (click here, now viewed 140,000 times) shows Hashir and another local teenager – both residents of Beeston, and both students at Morley Academy – fighting next to a busy Dewsbury Road, last November. The second (click here, now viewed 21,000 times) shows the two students in an altercation in the street in Morley in January, with an apparent bystander praised as a ‘guardian angel’ seeming to step in to calm things down.

Local news outlets including the Yorkshire Evening Post and Leeds Live picked the story up – but without apparently approaching the families for comment. Since then, Monday afternoon saw nine grown men outside Morley Academy, looking for Hashir (who was away from school that day), with police officers called to restrain them.

And Hashir has found himself bombarded with dozens of threatening and abusive online messages, most from complete strangers. One says “we’re going to f*ck you up”, another “where (sic) going finish you off”, another “your days are counted”, and another says that they followed his brother home from school, so now knew where he lived.

“I don’t understand it: I’m the one who’s been threatened repeatedly, and beaten up last month in Morley – but now I’m being called the racist thug. I can’t sleep, I can’t eat, I’m scared to go out. I’ve got stomach pains and I’m throwing up with anxiety. My family have always got on with the Sikh community, and been to the gurdwara (temple) many times, and even some of their homes locally. Everyone is judging me, but they don’t understand the background.”

He and his family insist that the fight in November followed weeks of abuse (online and offline) directed at him, by the other student. Text messages – which South Leeds Life have seen – show the other student throwing racist slurs at Hashir, on the basis of his Pashtun identity (an ethnic group in countries including Pakistan and Afghanistan). These escalated to threats, including phrases such as: “live ur last breath”, “u getting finished”, and “burn u alive”.

Two weeks after the fight, Hashir was pursued through Beeston by the other boy and his parents, and verbally abused and threatened by them (which he caught on camera). Then on 25 January, Hashir was confronted by the other student – this time accompanied by the masked adult male (wrongly identified on social media as an unassociated bystander) – in the street in Morley, chased, and attacked by them. But a friend of Hashir’s rushed to his aid, and broke up the fight – and the group proceeded to have a heated argument in the street, again captured on film. Shortened footage of that argument form the basis of the second film shared on social media, but fail – Hashir insists – to do justice to the whole event.

A police investigation is now underway, in conjunction with Morley Academy and the two families. West Yorkshire Police Superintendent Jackie Marsh – of the Safer Leeds Partnership – commented in a statement:

“We are aware of footage currently circulating on social media and a comprehensive partnership response is in place. A hate crime has been recorded and we are working closely with the family of the boy. We will continue to monitor the situation to ensure there is no repeat, and where necessary providing support to the local community.”

In a separate statement, Adam Ryder – principal at Morley Academy – stressed that the school were working to resolve the situation. He specifically commented:

“I would politely ask for the support of all parents, students and other members of the community by not commenting on, or sharing, social media posts related to this incident. This is because you will not be aware of the full details of the incident or the subsequent Police investigation which has taken place. Comments (on social media) might actually have an adverse effect and could serve to antagonise a situation.”