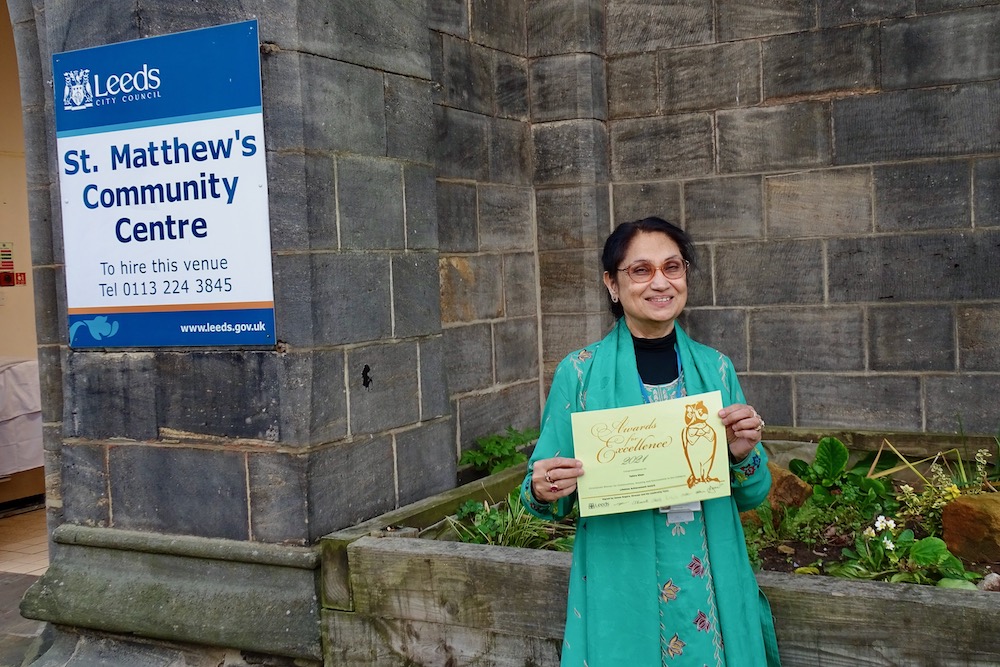 Hundreds if not thousands of people in Beeston and Holbeck will know Tahira Khan, having received her help and advice or attended an event she has organised. Now the unsung hero has been recognised with a Lifetime Achievement Award from Leeds City Council.

Tahira has been helping residents with a wide range of issues from welfare benefits to immigration, since she joined the Council in 1983.  Now a Senior Community Development Officer, she is still as passionate about helping people as she ever was.

As well as welfare benefits and immigration she helps people through the bureaucracy of housing and education applications whose forms can be difficult to navigate, especially if English isn’t your first language. Beyond advice, she has helped women fleeing domestic abuse, helped people access ESOL (English as a second or foreign Language) classes and organised summer trips for families who might not otherwise get a holiday.

She was nominated for the award by her manager Diane Coombes who said:

“Tahira will go out of her way to help the community with their enquiries. During the pandemic Tahira set up a WhatsApp group so that her clients could still contact her and share forms with her so she could check them.”

She also cited an incident when Tahira was helping a woman fleeing domestic violence. The woman’s husband turned up demanding to see her. Tahira organised for the woman to be picked up by Sahara Refuge from the office window whist she kept the husband talking in reception until the Police arrived.

Tahira, who splits her week between St Matthew’s Community Centre in Holbeck and Dewsbury Road Community Hub, received her award at an online ceremony on Tuesday (14 December 2021). Accepting the award she said:

“I am very proud to work for Leeds City Council. It is my passion to help people when they are in crisis and need my help. I have a very soft nature and don’t like to say no to anybody.”