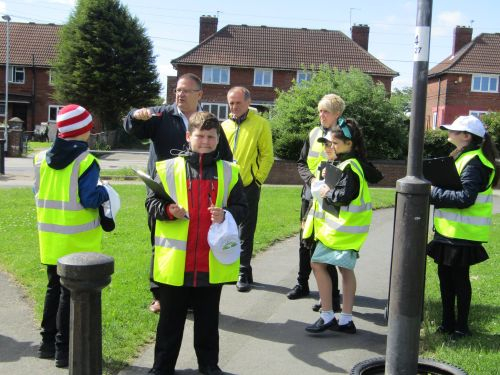 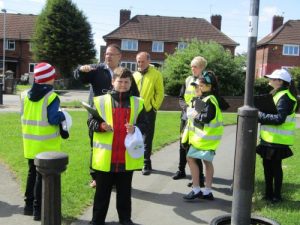 The Junior Green Team hit the streets of Belle Isle on another BITMO Walkabout!

The Junior Green Team joined the monthly Belle Isle TMO Walkabout on a very windy, but sunny June morning around the Windmill and East Granges areas of Belle Isle.

The Junior Green Team- who are year 5 pupils from Windmill Primary School- each had the task of recording environment issues such as litter, graffiti, dumping, dog fouling and overgrown areas.

The information they gather is handed over to Belle Isle TMO who deal with it accordingly. One of the most noticeable observations was how little litter there was, even dog fouling was scoring low!

There were some overgrown and untidy gardens, but there were loads of well kept gardens, which the Junior Green Team enjoyed pointing out. One thing the team were particularly keen to point out was graffiti- they really don’t like it- but luckily there was not a great deal of this to report on.

They all said how delighted they were to be joined by the Junior Green Team; how much enthusiasm the children showed, and how obvious their passion is for being involved with environment issues in the area in which they live.