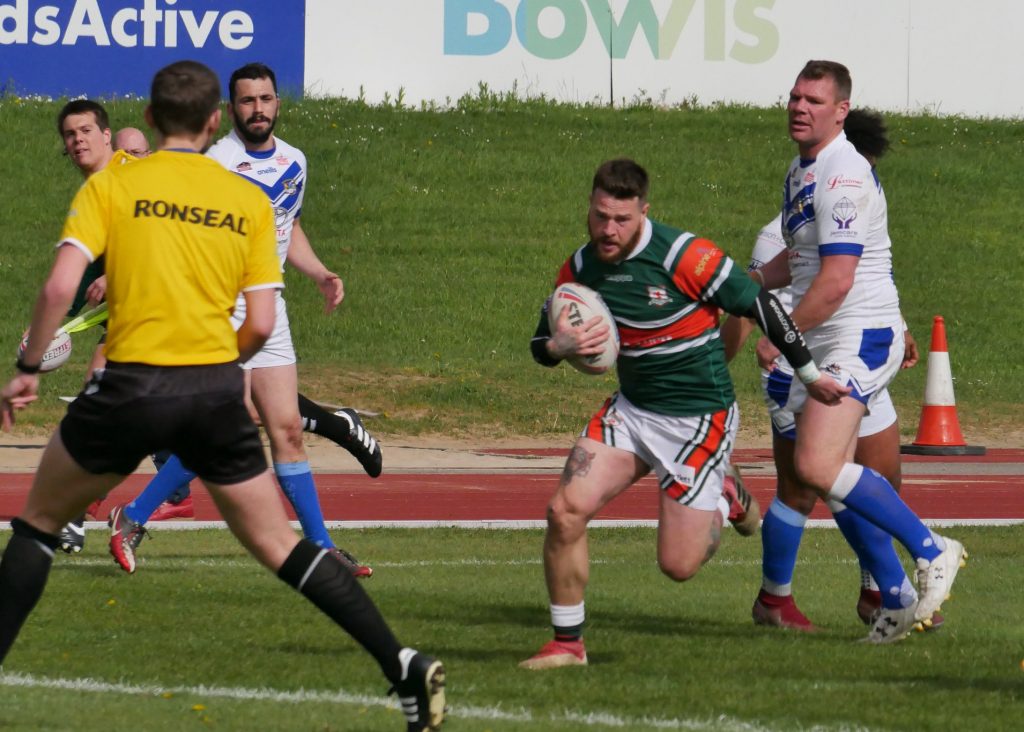 Hunslet bowed out of the inaugural 1895 cup yesterday (Saturday 4 May 2019) to a resurgent Workington Town ending their chances of making an appearance at Wembley this term.

The Cumbrians fresh from appointing a new coach could only muster 14 players for a game some said may be better to lose, owing to the later rounds being midweek. Indeed Hunslet had many players missing including Josh Tonks, Nathan Chappell, Gareth Potts and Adam Robinson. But it’s the thirteen on the field that count and it was Workington that deserved the win.

From the off the visitors looked up for the challenge and on 6 minutes Oliver Wilkes waltzed over past some weak Hunslet defence to make it 0-6.

Although Hunslet looked dangerous at times (Heaton spilt the ball with the line begging and Martin overran a Reece Dean ball) it was Wilkes who scored again for the visitors rounding Jimmy Watson to make it 0-12.

It could have been worse for the Parksiders had Workington not knocked on in the corner following an interception. But on 25 minutes following a Zach Braham barnstorming run, Jack Lee (in his 100th game for the club) snuck over to reduce the arrears to 6-12.

The momentum was now with the home side and after deft passing to the left the impressive Tom Ashton was too strong for the Cumbrians, and with Reece Dean’s conversion we were all square at 12-12.

Workington kicked straight dead from the restart giving Hunslet a shot at goal to grab the lead, but Reece Dean’s kick was well wide and at the hooter we were all square at 12-12.

Hunslet’s performance after the interval was brought into question after last week, but today they were a different team. An early Tommy Brierley chance forced a Town drop out, before on 45 minutes Villa Halafihi carved Workington open to send Nyle Flynn over by the posts to give the home side an 18-12 lead.

But Workington were not beaten, and after a Ryan Wright late tackle O’Donnell levelled the scores up at 18-18. At this point the experience of Sean Penkywiecz came into play for Workington, a deft kick to the corner was pounced on to make it 18-24 (after a successful conversion), and another grubber kick towards Hunslet’s posts seemed to create panic in the home defence as Oliver Wilkes pounced to complete a hat trick.

With the score now 18-30 to the visitors and only 10 minutes to go it was all on for Hunslet. The re-introduction of Jack Lee and Mike Emmett seemed to be the tonic when great ball handling sent Jimmy Watson over for a fine try to make it 24-30.

Workington grabbed the chance of a drop goal to stretch the lead to 24-31, but a superb Tom Ashton try down the left wing meant it was a nail biting finish leaving it 28-31 with minutes to go.

Although Hunslet had their chances it was to be Workington’s day as a frustrating Reece Dean chip kick came to nothing on the hooter.

Coach Gary Thornton would have liked to see his charges get back to winning ways, but it wasn’t to be. Impressive performances from Tom Ashton and Charlie Martin may nudge them into contention for the forthcoming league game at Workington on 19 May, but it’s likely to be a stronger team in what realistically is a more important game.

Photo: Jimmy Watson on his way to the try line by Paul Johnson Phoenix Photography