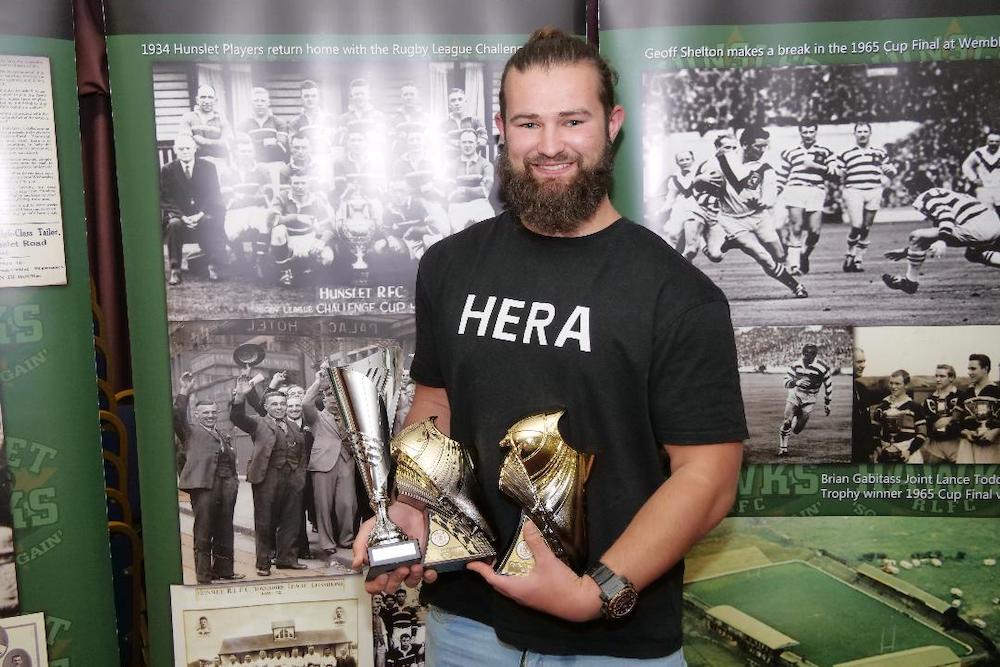 The 24-year-old prop led from the front throughout the Parksiders’ Betfred League 1 campaign and, at the Hunslet’s end-of-season bash at the South Leeds Stadium, collected both the Players’ Player and Supporters’ Player accolades; in addition, Alan Kilshaw handed him the Coaches’ Player trophy.

“It’s been a difficult year for quite a few reasons but in the last ten years, during which I’ve been involved with a number of teams, most of them successful, I haven’t come across a group as great to work with as this one; from the players, their partners and families, to the support staff and the board, to the fans.

“Harvey epitomised that with his attitude on and off the field from start to finish. He is a pleasure to coach and I struggled to understand why he wasn’t among the awards at the Rugby Football League’s Presentation Night earlier in the week.”

Captain Duane Straugheir, who is moving on to pastures new in 2023 after breaking his arm towards the end of last season, said:

“Harvey had an unreal year; he came back fighting after a couple of rejections and was inspirational throughout the campaign. Players’ Player of the Year awards are very special, you’re being recognised by the men who are alongside you match-by-match, and Harvey richly deserves the trophy.”

Hallas, who recently agreed a two-year deal with the Parksiders said:

“This has been the best season of my career, I was set certain targets pre-season by ‘Killer’, and I did my best to meet them. I also learned a lot from Straff and I had to step up when injury ended his season.”

The prestigious Geoff Gunney MBE award went to former Operations Director and, previously, chairman Ian Johnson, who gave the club tremendous service over a long period before stepping down earlier this year because of growing commitments in running his successful restaurant. And Steve Calline, who has been a Hunslet fan for some seven decades and who donated £500 from his recently published, book ‘Parkside – a History of the Hunslet RLFC 1895-1973’ was honoured with the Supporter of the Year silverware.