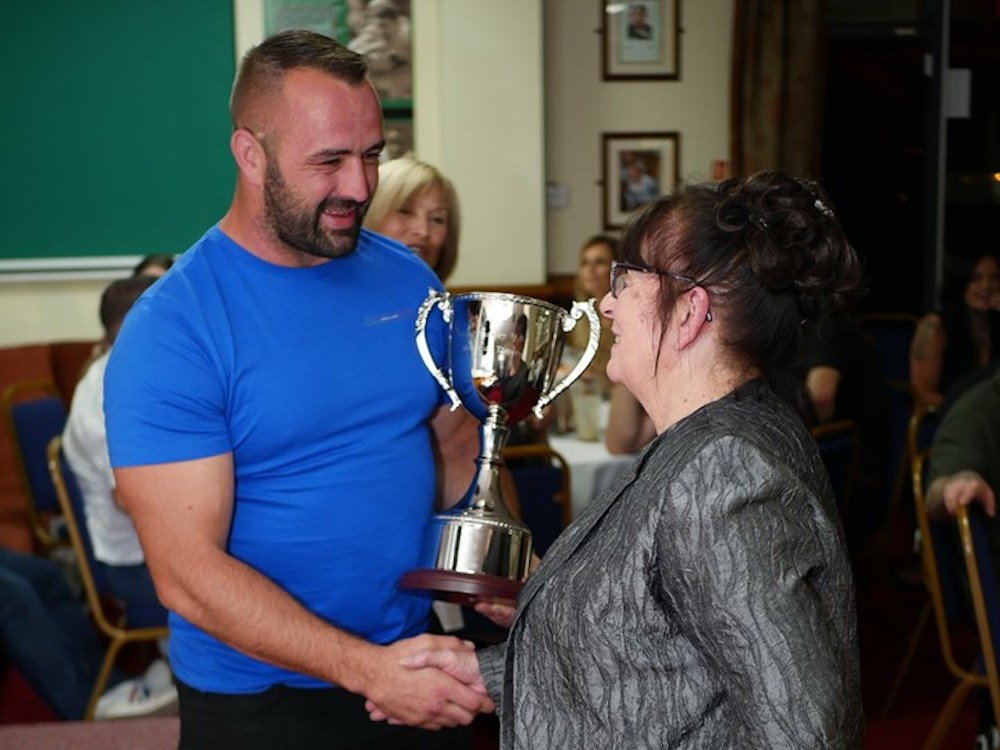 Friday 13 September 2019 saw the coming together of team, staff and fans down in the Phoenix Bar at South Leeds Stadium to make the annual awards to Hunslet RLFC team members. Players brought along their families to see who had won the votes and to watch a review of the season.

Top try scorer with 19 tries through the season was Gareth Potts. He announced his retirement due to injuries and will be a hard act to follow, as his achievement puts him second in the League One table of Top Try Scorers. Gareth also received the Supporters’ Player of the Year award.

Michael Haley, who celebrated his 32nd birthday the day before the awards, is another who has decided to retire, after six years at Hunslet. He received the award voted for by fans who travel to away matches together – a large sculpture of a hawk – which was presented by chief ball boy, Corey Cairns.

He also became first custodian of a new award, the Geoff Gunney Trophy. This handsome trophy, donated by Geoff’s partner, Pat, commemorates the marvellous record of the Hall of Fame legend who pulled Hunslet back from disappearance in 1973.  One-club Gunney was only sent off once in nearly 600 matches and an extract was read from the ref’s letter reporting the incident, which involved fisticuffs after a Wakefield player punched Geoff in the face with one hand, before trying to gouge his eyes with the other hand. Gunney was a tough, hard-running forward, so it was fitting that Michael Haley was the first recipient.

Jimmy Watson, the Hunslet full-back, received the Ronnie and Joan Fletcher Award. Jimmy is a local lad, much admired by the fans. The Top Tackler with over 500 was Mike Emmett, another about to retire. His offer to show his tackling technique was politely declined by the compere.

Also receiving a trophy was Zach Braham, chosen by Gary Thornton, the Hunslet coach, as the Most Improved Player of the season. Several players were mentioned by the coach as contenders for the Coach’s Player of the Year, but the accolade went to Vila Halafihi, who claimed he had never won anything before. Fittingly, he claimed not one, but two awards on the night, adding the cherished Players’ Player of the Year award to his collection.

Presentations were also handed out by the captain, Duane Staugheir, as thanks to the back-room staff, an important part of the team. The evening ended with a supper and presentation of their training shirts to the players. Look out for the new season’s fixtures, including the famous Lazenby Cup match, and thank you to all the fans who have supported Hunslet RLFC throughout the season.