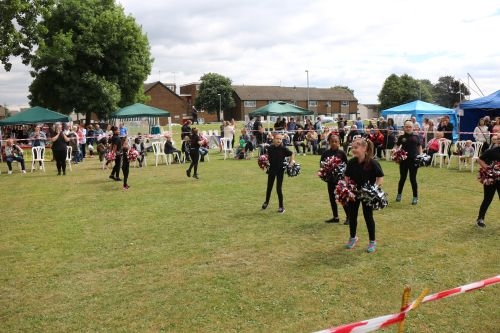 I arrived at the gala around midday to see around 100 people enjoying the sun and and the various stalls, rides and other things for the Gala.

Glad to see this year not many car boot stalls and good to see plenty of Tombola stalls to raise money for good causes.

The Fire service was out giving advice and as well the Cancer research stall.
Bungee trampolines jumping was very popular with the children.

I did not get chance to speak to Hilary as about 10 people around him having a chat. Did get some photos though.

On the parade ring girls dancing their hearts out. Well done girls.

Other stall included many I used to see at Hunslet Feast when I was a lad. The Thomas the Tank Engine roundabout was new, I’d not seen before.

The three bouncy castles were on site again, very popular.

Nice to see the Hunslet Carr Residents Association holding a Tombola , where would we be without these groups?

Although the Gala went on for four and a half hours, when I’m sure plenty of more people to drop by.

Made my way home after two hours to write this up, Edit the photos and meet the newspaper deadline.