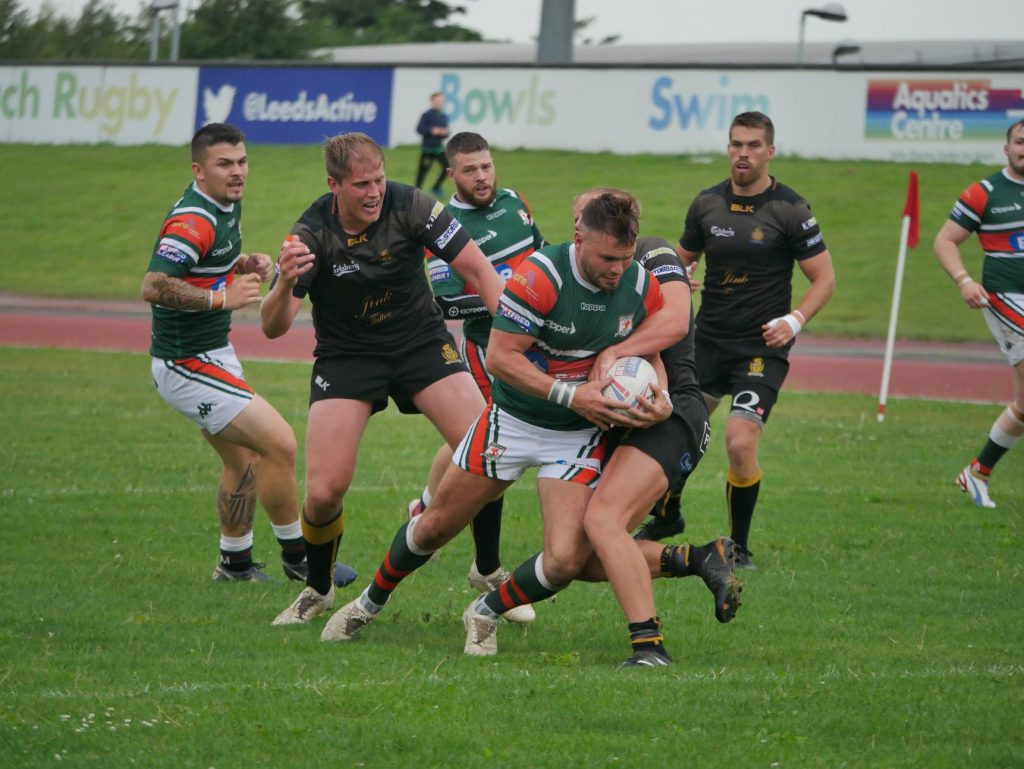 Hunslet now look destined for a play-off place at best after losing to table toppers Whitehaven at the South Leeds Stadium yesterday (Saturday 27 July 2019). The Cumbrians are now 4 points clear of second placed Newcastle and 7 points clear of 5th placed Hunslet and look nailed on for promotion.

In a must win game for the hosts the loss of influential centre Ben Heaton (out for the season) was a blow, but with a good home record against the Cumbrians a win was not impossible.

After a scorching week, torrential rain before kick off left the playing surface slippery. Therefore points in the first half were at a premium. 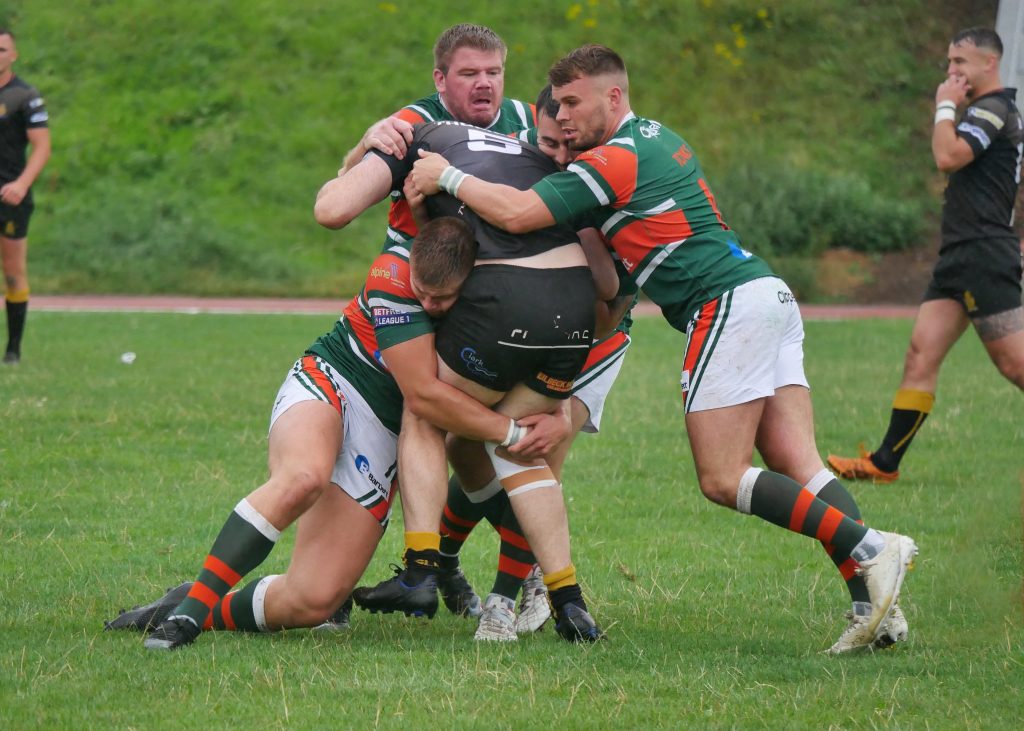 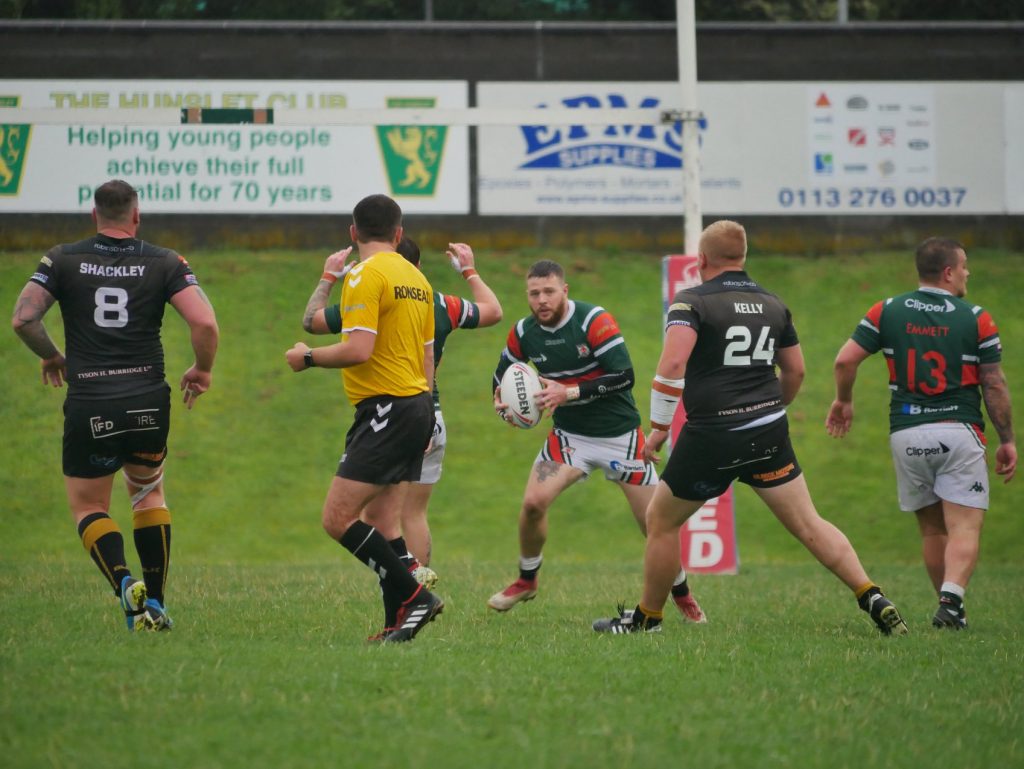 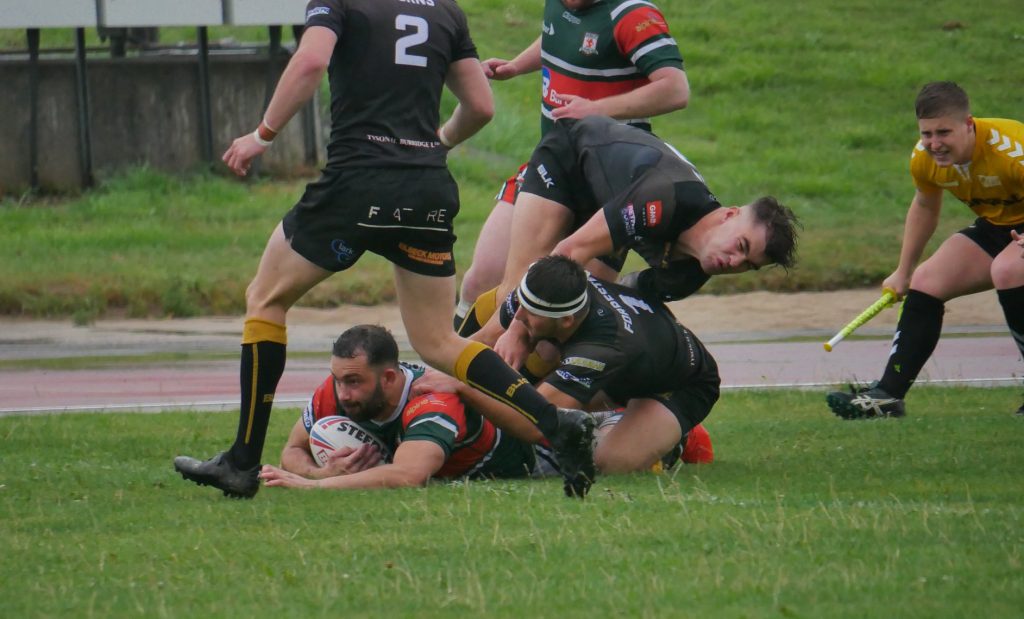 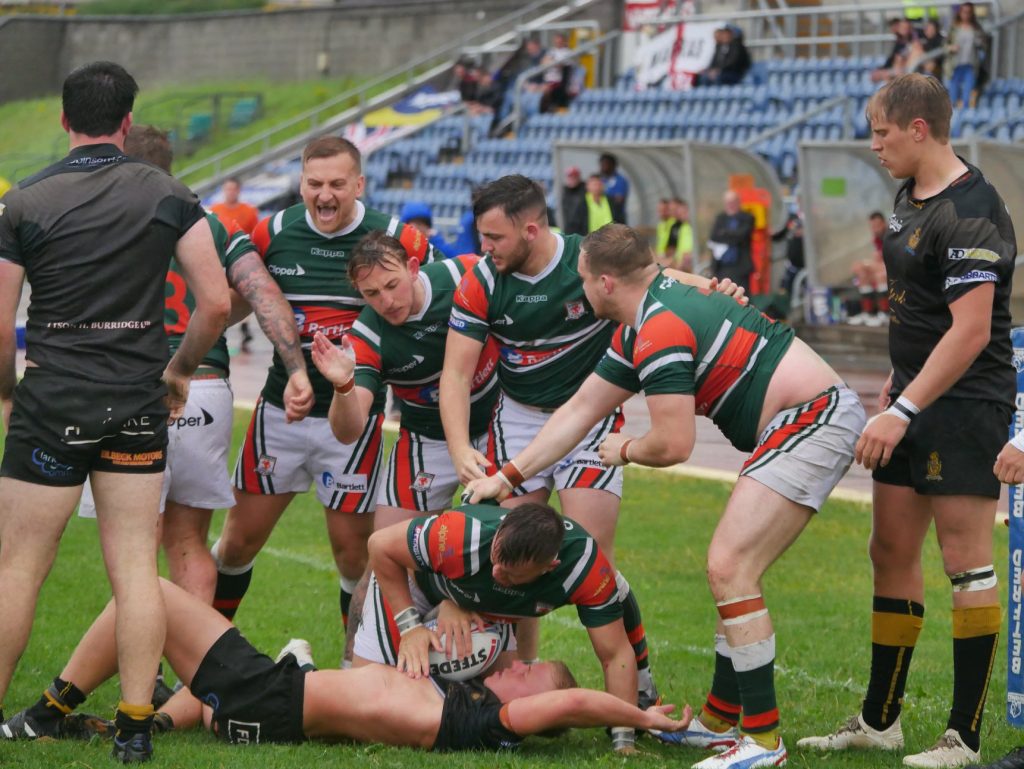 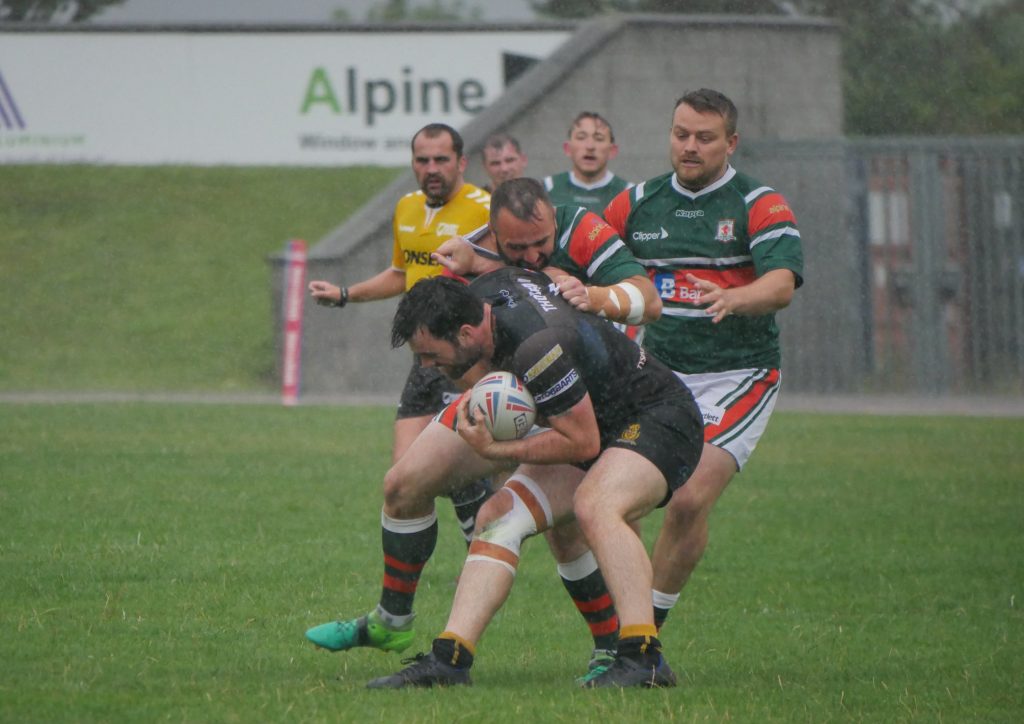 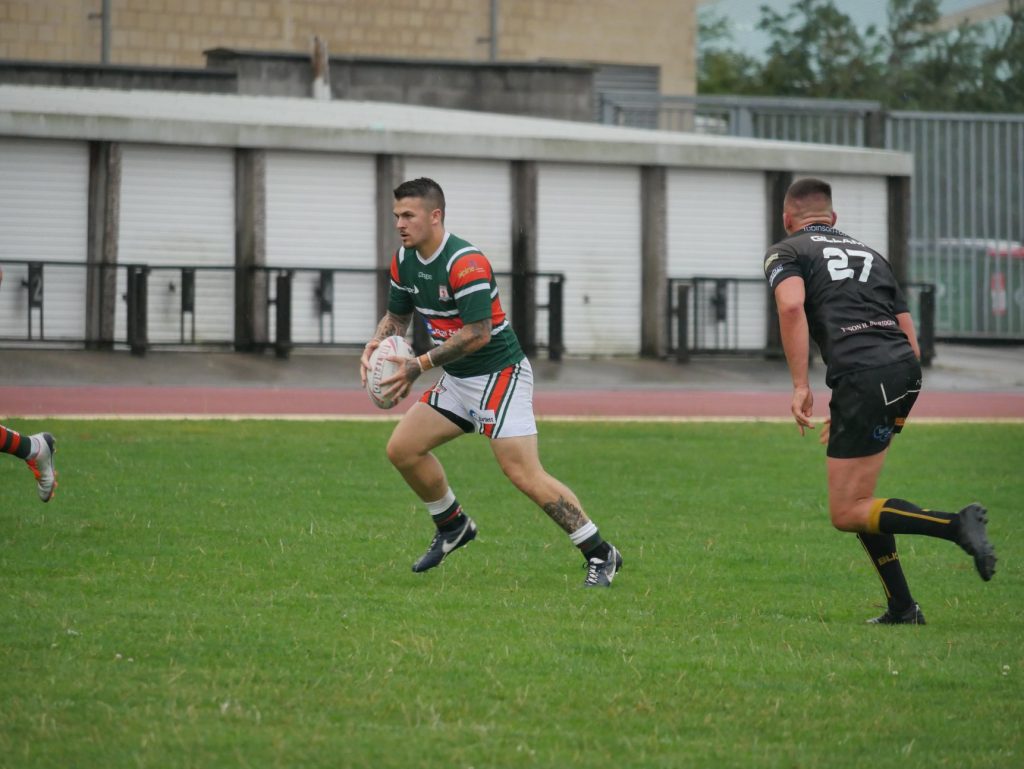 Whitehaven kept the ball tight early on, preferring to drive mainly down the middle. They took the lead with a penalty on 8 minutes having already forcing the hosts to drop out 0-2.

Eventually though, Hunslet had pressure of their own. Gareth Potts coming closest when a Whitehaven player spilled the ball over his own line. Agonisingly for the home faithful, Potts at speed could not adjust to touch the ball down.

Whitehaven threatened next and knocked-on from a kick with the line gaping wide open. Hunslet had more chances with Brown knocking-on close in, and Tonks being well tackled when he looked all on to score.

From another Whitehaven attack Simon Brown (on his second spell at the club) dropped out massively from under his own posts turning the momentum towards Hunslet, from this pressure the hosts were awarded a penalty and Reece Dean levelled things up 2-2.

Another penalty on the stroke of half time was converted by Dean, and the Yorkshiremen ended the half on top with a slender, but crucial in the conditions, lead: 4-2.

Hunslet recently have been poor in the second period (especially at home), but despite Whitehaven converting a penalty to make it 4-4 the home side registered the first try on 45 minutes. Hunslet had forced a drop out and swift passing to the right set up Nathan Chappell who slid over in the corner. Reece Dean converted and Hunslet led 10-4.

In a game for forwards Adam Robinson was playing well for the Parksiders, but the introduction of Michael Haley and Zack Braham really got Hunslet on the front foot. Reece Dean took 2 more points for the hosts stretching the lead to 12-4.

With the weather now cleared up the game changed on the hour when Whitehaven scored a bizzare try. Kelly driving in towards the posts lost the ball, but it hit a series of players before coming back into his hands to score. The conversion made it 12-10. Game on!

Hunslet’s discipline now went awry and Whitehaven took full advantage. Influential half-back Simon Brown was sin-binned and the Cumbrians levelled it up from the resulting penalty 12-12.

Moments later another penalty when Robinson was adjudged to have shoulder charged was put on report, but the resulting goal kick hit the post. Whitehaven though were now on top at a crucial point in the game.

The winning try came when Forster, always a thorn in Hunslet’s side, got the ball out of a three man tackle and Whitehaven shipped it quickly to the right for Thompson to squeeze in the corner.

The conversion to make it 12-18 might have already taken the wind out of Hunslet’s sails, but Holliday’s flapper of a drop goal in the dying moments sealed their fate. Final score: 12-19.

It’s now crucial Hunslet find some home form as North Wales (next Sunday 4 July) Workington and Oldham still have to visit South Leeds. Wins on the road this season have been fantastic, but there will be no place in the play offs unless that home form improves.