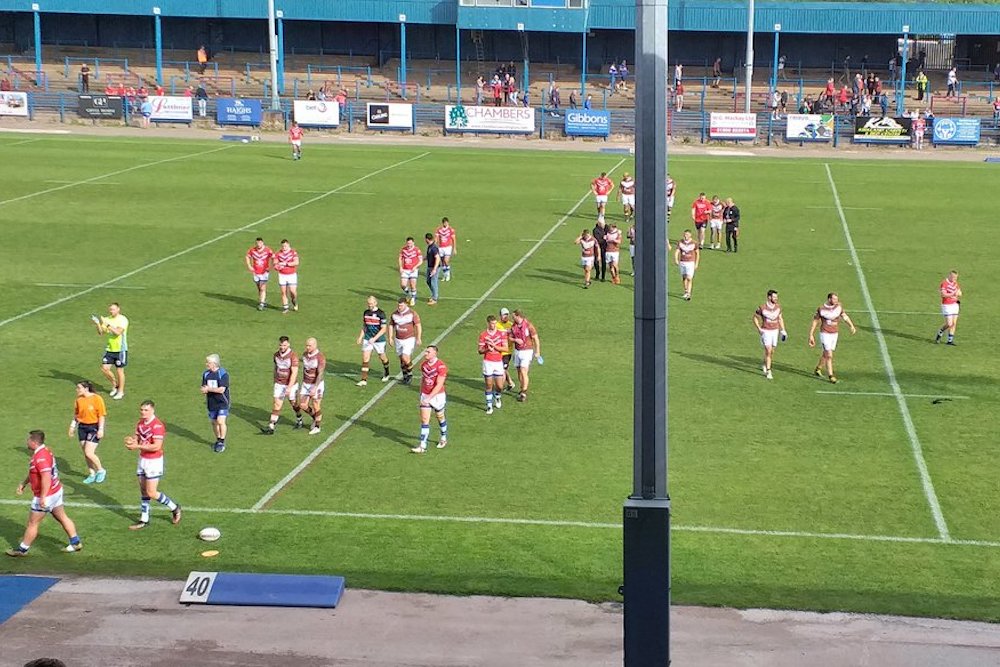 Hunslet ended the round robin section of their Betfred League 1 season with a resounding win at league runners up Workington Town this afternoon (12 September 2021).

Although both teams have qualified for the play-offs and to some extent the game was a dead rubber, Hunslet now seem to have found some form and momentum defeating a team who are favourites for promotion.

From the off Hunslet looked sharp and were unlucky when Will Cooke was held up over the line on only the 4th minute. The good start looked to have faded though after Simon Brown was sin-binned for a high tackle and Workington started to mount some pressure.

On the last tackle Jamie Doran was given too much room and from the resulting power-play Brad Holroyd went over in the corner. Forber converted and Workington led 6-0.

But The Parksiders were not to be deterred and after Jy-Mel Coleman was held up over the line, Brambani made a break only for the ball to go to ground with the line open.

Hunslet breached the Town line for the third time when Harvey Whiteley was held up, but this time they made the pressure count when Mikey Wood found a hole in the Town defence to score. 6-6 after 25 minutes.

Workington always looked at their most threatening when attacking down the right and again with too much time and space Doran put in a deft kick for Joe Brown to score. 10-6

Although Town had a chance to score, which was ruled out for a Jamie Doran forward pass, it was Hunslet who registered next. Harvey Whiteley who followed up last week’s Man of the Match with another impressive performance sent out a flat pass to send Alex Rowe over. 10-12

Entering a long period of added time it was Hunslet with the 2 point advantage, but the right side attack penetrated again for Workington. Another smart kick was swept up by Brown for his 2nd try of the afternoon. 14-12 at the break and nothing in it.

Coach Alan Kilshaw must have given a rousing half time team talk as Hunslet came out of the sheds fired up and on 43 minutes after Cooke was held short his flicked pass sent Duane Straugheir over under the posts for an easy Brambani conversion. 14-18.

At a crucial point in the game both teams had their chances. Alex Rowe broke through for Hunslet before Jordan Andrade was held just short, then Workington forced their way over only for a Hunslet defender to get between the ball and the ground.

Again that man Harvey Whiteley forced his way over the line but couldn’t wrestle the ball down. This time though Dominic Brambani (who was excellent today) executed a precision kick to the corner for Reece Chapman-Smith to snatch the ball and score. 14-22

Now cool heads were needed and good game management came into play. Firstly for an illegal tackle on Joe McClean then for one on Harry Kidd, Brambani coolly slotted the penalties to stretch Hunslet’s lead to 14-26 with only 15 minutes to go.

From only 8 points behind Workington were now 12 behind and this had the effect of nullifying their attack. Perhaps with an eye on the play-offs Hunslet were able to rip them open when Jy-mel Coleman showed a clean pair of heels to feed Lewis Young who skipped under the sticks to round a great day off. 14-32

Dominic Brambani attempted a drop goal to try and really put the game to bed, but Workington never looked like scoring and on the hooter it was happy Parksiders all round.

Hunslet cannot get carried away, if they are to gain promotion they will need to win four games on the trot against this type of opposition. But momentum is everything and Hunslet seem to have found form at exactly the right time.

Coach Alan Kilshaw was pleased the team stuck to the game plan, and other than a wrist injury to Simon Brown the day was a success. Brambani and Coleman led the team around the field and Whiteley, Wray and Rettie starred, but you cannot fault any player in chocolate and white today.

Hunslet play away to Doncaster next Sunday in the Round 1 eliminator.

One Reply to “Hunslet end league campaign in style”