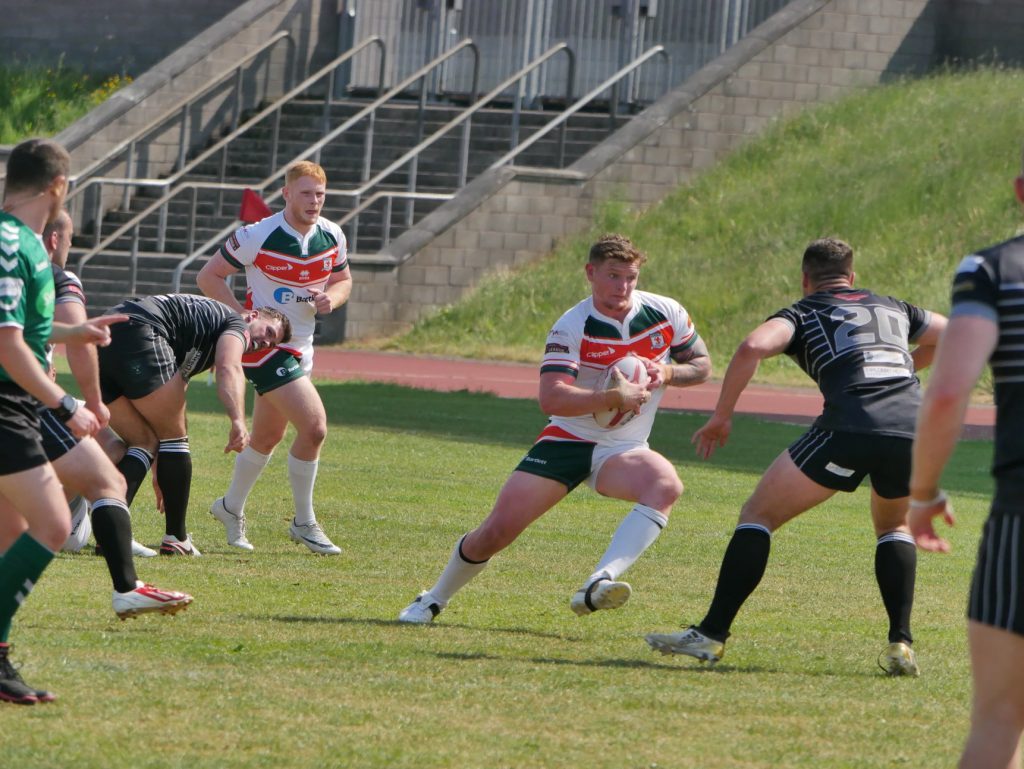 Hunslet RLFC racked up a club record 86 points against the hapless West Wales Raiders in the a one-sided match in the sunshine at South Leeds Stadium yesterday afternoon (27 May 2018).

New boys West Wales have lost all nine games this season with teams scoring an average of 87 points against them and York City breaking the Rugby League points record with a 144-0 win.

“We have to remain professional today and it will be a test of our mental toughness as much as anything to stick to the game plan and play to our structures.”

Overall Hunslet did just that and put in a solid performance over 80 minutes, although at times they seemed to drift and lose focus, which could be dangerous against tougher opposition. Today wasn’t so much about winning, but keeping up the momentum that the team is starting to build.

Hunslet went ahead within two minutes when captain Duane Straugheir scored in the corner. Joe Sanderson was unable to convert, one of only two kicks he missed all afternoon.

Two more tries followed in quick succession from Jimmy Watson and Jack Lee, both were converted by Sanderson, taking the score to 16-0 after just 7 minutes.

West Wales then had their best spell and were camped near the Hunslet line for a good five minutes. Mistakes by both teams meant that Raiders couldn’t score, but Hunslet couldn’t break out either.

The scoreboard started ticking over again when Nathan Chappell finished a sweeping passing move in the corner. He was followed minutes later by David Foggin-Johnston crossing the line.

Towards the end of the half Cain Southernwood make a great break running 50m but couldn’t find Mufaro Mvududu as he was tackled. Eventually Jack Walton forced his way over the line by the posts. Then as the half time hooter went, Mvududu crossed untouched in the corner and touched down between the posts. With Sanderson’s unerring conversions, Hunslet took a 38-0 lead into the half time break.

After the break West Wales clearly tired, but Hunslet kept up the pressure running in a further 8 tries.

Hunslet’s next match will be an altogether different proposition as they face Whitehaven. This re-arranged game will be played on Saturday 2 June at South Leeds Stadium, kick off 3pm.