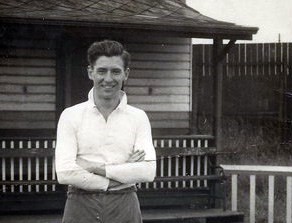 This week (Tuesday 27 March 2018) saw a packed-out commemoration service for Jimmy Brogden – a characterful and much-loved Hunslet man and acclaimed sportsman, who recently passed away aged 95 following a short illness.

Jimmy was born in Hunslet in January 1923, attended Hunslet Moor Junior and Senior School, then worked at Tetley’s from the age of 14 – first in the bottling department, later in sign-writing. He served in the Royal Navy during the Second World War, and saw considerable action on the Mediterrean and Arctic Convoys.

After the war, he worked at a Leeds manufacturing plant named George Porteous – then much later, for the Water Board. He married his first wife Louie in 1949, and they had two boys – Lee and Jimmy.

Jimmy’s great passion was sport. He played professional rugby league for Hunslet and Bramley, as well as football, and was also a very long-standing member of Hunslet Nelson Cricket Club – where he became Life President. He was also an avid dominoes player.

He’ll be remembered for his sporting endeavours – amongst other things, being on the cup-winning Hunslet RL teams of the late 1940s. But he’ll also be remembered as a legendary gentleman, for his kindness, and his ability to talk the hind leg off a donkey!

He had a sharp intellect and wit, a phenomenal memory, and was incredibly well-read – often quoting Shakespeare, Dickens, and the scriptures. And he always remained fiercely proud of south Leeds, never living outside Hunslet or Beeston.

Louie sadly passed away in the 1980s, after 37 years of marriage – but Jimmy found happiness again, with Edna. In later life, they enjoyed travelling – and, ever the talker, Jimmy had a good go at mastering Spanish whilst overseas. They also became much-loved regulars with the Ciaran Bingham Foundation Trust, a local charity working to support older people to live fulfilled lives.