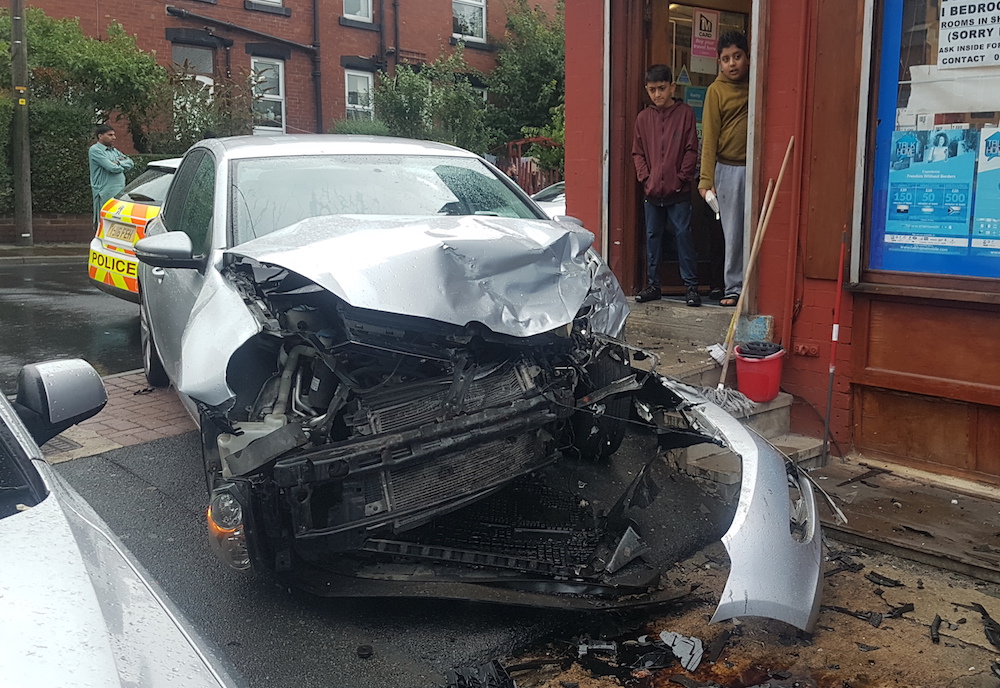 After another car crash involving young men, residents ask: “How long ’til someone dies?”

Residents were left reeling as a crashed car lay across the entrance to Mohammed Hanif’s shop on Stratford Street.

His daughter Sunjeeda Hanif arrived on the scene shortly after the smash at 6pm on Thursday 23 August 2018. She told South Leeds Life:

“I was so scared seeing the car smashed right on the shop step. This could have ended tragically for our family members, local pedestrians, customers and the drivers involved.” 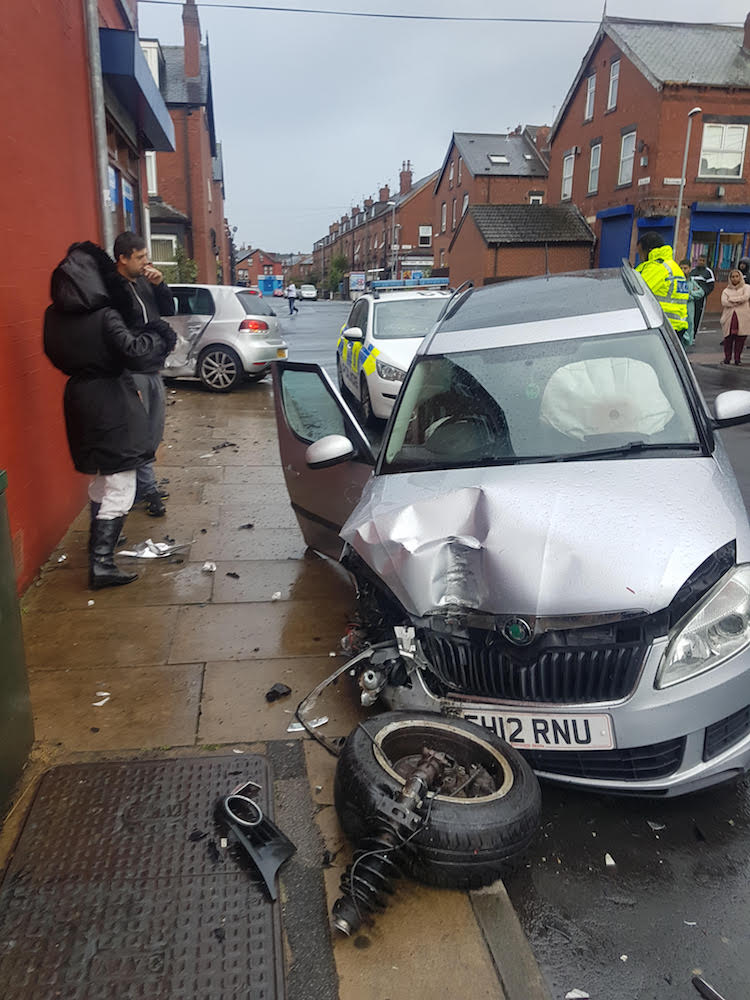 The driver of a Skoda Roomster was injured as his car collided with a VW Golf at the junction of Stratford Street and Bude Road. A third, parked car was also hit and written off. It appears the driver of the Skoda had failed to give way at the junction and that both cars were being driven too fast, exceeding the 20 mph speed limit. The driver and passenger of the Golf fled the scene towards Rowland Road.

“This is a residential area where local children play out” continued Sunjeeda, “luckily that day kids were not playing out at the time of the crash.

“The Council need to implement immediate changes to further encourage speed reduction of cars which access Stratford Street and Bude Road. Give ways should also be placed on Bude Road. It’s not the first accident at this place and could end in fatalities next time.

“The local community need to remind drivers of the recent Bradford tradegy. We are all responsible to encourage safer driving, in particular in busy residential streets.”

The driver of the Skoda was taken to Leeds General Infirmary by ambulance with shoulder and rib injuries.

“We understand the worry this is causing the communities on Beeston Hill. This dangerous speeding needs to stop. Police enforcement on its own won’t work.

“It will take the combined efforts of the local communities and council to help educate these drivers, predominantly young men, to change their behaviour. Working together, we can send out a strong message that this is unacceptable.”

West Yorkshire Police said their enquiries into the crash were ongoing and appealed for members of the public to come forward with any information. You can call on 101, or call the independent charity Crimestoppers anonymously on 0800 555 111.

We all know this wasn’t an isolated incident. The same week saw a Range Rover overturn in a crash on Middleton Road and the bend by the nearby Parnaby Tavern has witnessed countless crashes. Meanwhile Middleton and Belle Isle have been plagued by illegally ridden Quad Bikes over the last year.

It’s not just a South Leeds problem and it’s not just young men at fault, but we do have a serious problem with ‘boy racers.’ Sitting behind the wheel of a powerful machine is exciting. But that excitement comes with responsibility – you are in charge of a ton of metal that has the power to kill people.

As a community we need to have a serious discussion with our young men, before they or others are killed.

One Reply to ““How long ’til someone dies?””