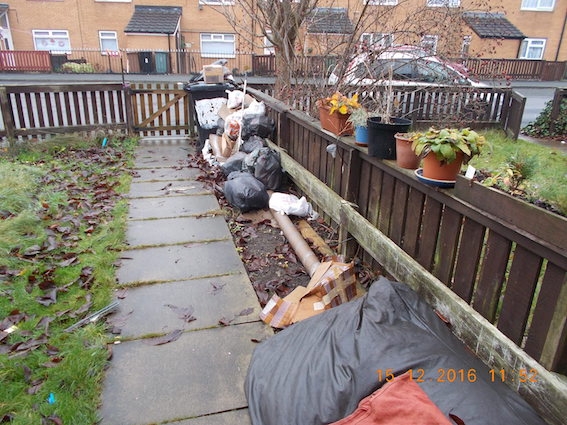 Complaints about waste piling up in two Leeds gardens has resulted in two local residents being fined this week. Council officers had to step in when fed-up local people reported waste that had been accumulating in their gardens.

Charlotte Dolphin, of Royal Close, Hunslet, failed to appear before Leeds magistrates, but was found guilty in her absence and fined a total of £945.00. Dolphin failed to clear the build-up of waste in her garden, despite numerous complaints from local residents and requests by environmental officers.

Masker Amin, of Otley Road, North West Leeds, was found guilty at Leeds magistrates on 23 August and given fines totalling £1250.00. Amin ended up in court after he ignored requests from council environment action officers to ensure large accumulations of dog mess was cleared from the property, of which he was the landlord. Although Amid was given clear warnings to take action and remove waste from the property, residents complained that dog excrement continued to be left for weeks. Although he wasn’t personally occupying the property at Burlington Road, Beeston, as the landlord he had a legal responsibility for his tenants and is required to meet council regulations.

Both cases were prosecuted under Section 48 of the Anti-Social Behaviour, Crime and Policing Act 2014, which makes it an offence for a person to fail to comply with the terms of a Community Protection Notice.

Community protection notices direct people to stop unreasonable behaviour, which is having a negative impact on the local neighbourhood’s quality of life.

“Both tenants and landlords have a responsibility to take care of their gardens, keeping them clean and tidy and ensuring all waste is dealt with appropriately. Community Protection orders are another means by which environmental officers can maintain these standards and protect the wider community.

“Although people may not think that storing waste in their garden is a concern, it hugely impacts neighbourhoods and can act as a catalyst for other environmental issues, such as littering and fly-tipping.”