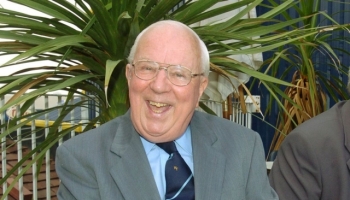 It is with much sadness that we learned yesterday of the death of former club secretary Harry Jepson OBE, aged 96.

Awarded an OBE for his long, distinguished service to the code, Harry Jepson spent a lifetime in the sport of Rugby League. 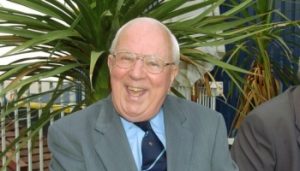 Harry was born in the heart of Hunslet and first visited his beloved Parkside in the late 1920s to watch the famous myrtle and flame, one of his earliest heroes being Jack Walkington. As a schoolboy he won a Scholarship to the renowned Cockburn High School and, having passed his matriculations, went to work at Leeds City Council’s Education Department in their Medical section.

Enlisted at the start of the Second World War, he joined the Duke of Wellington’s Regiment and then the Royal Army Service Corps, seeing active duty in North Africa and Southern Italy. Trained as a school teacher on his return, he was seconded to the famous League-playing Bewerley Street School where he came under the wing of the Headmaster there, Edgar Meeks, the Hunslet chairman.

He became involved in looking after the under 11s, then the under 13s and eventually the Senior side at the school while also becoming Secretary of the Hunslet Schools Rugby League Association and involved in County Rugby League at that level. He was also seconded by Hunslet Secretary George Richardson to lend a hand at Parkside, receiving an official appointment as Assistant Secretary and, in 1963, becoming Secretary.

His teaching work took him to Cottingley Junior Mixed School and then Rodley before ending his days in education as Deputy Head at Clapgate School for the final 14 years of his professional working life. He remained at Hunslet for seven years, joining Leeds in the late 60s to work as Chairman Jack Myerscough’s right hand man and fixer with initial responsibilities for the second team.

He was a key presence in the newly-instituted Colts League and was the Chairman of it until 1988, one of the highlights of his time in the sport being when he managed the sole Colts Tour to Papua New Guinea and Australia in 1982. He was elected as one of the inaugural members of the Rugby Football League Board of Directors, which took over the strategic running of the sport from the RL Council, on which he was Leeds’ representative from 1983.

He became Football Director at Leeds in the mid 80s using his extensive knowledge and contacts worldwide to help rebuild the side, signing players such as established Kangaroo internationals Eric Grothe, Wally Fullerton-Smith and Peter Tunks while the likes of Andrew Ettingshausen, Tony Currie and Peter Jackson subsequently went on to represent their country.

He chaired the Council meeting that discussed the offer to implement Super League and was heavily involved in the formation of French club Paris St Germain, who entered the competition on its launch in 1996, his passion for French RL stoked by meeting Jean Galia at Headingley in 1934 when an impressionable schoolboy.

He was President of Leeds and a noted ambassador for the club and the sport, he was also Chairman of the Rugby League Conference, the competition which helped spread the game throughout England, Scotland and Wales in the summer, the sides in the Premier Divisions contesting the Harry Jepson Trophy.

Last month Harry was awarded an Honorary Doctorate of Education from Leeds Beckett University, and received a standing ovation from the graduating students at the ceremony.

Our thoughts and prays go out to Harry’s family at this sad time. RIP

Harry touched many lives in South Leeds, please share your memories of him in the comments section below: